Nehru On My Sleeve

Campaign wear is serious business. Netas want to impress both the aam admi and TV cameras. 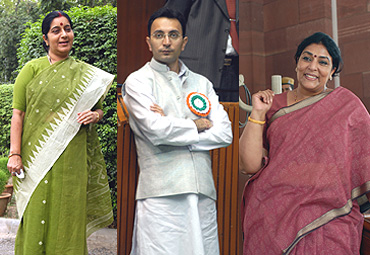 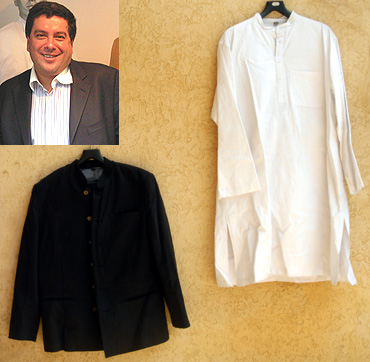 As election fever peaks and politicians sweat it out on the campaign trail, our netas are faced with a sartorial dilemma—how to sport the aam admi look and at the same time impress the crowds, and the ubiquitous TV cameras zeroing in on every wrinkle and crease?

Many politicians are opting for the solution provided by a young designer from Champaran, Bihar. National Institute of Fashion Technology (NIFT) alumnus Mohammed Azimur Rahman has come up with a de luxe version of the kurta-pyjama, and his clientele includes political heavyweights like Rashtriya Janata Dal supremo Laloo Prasad Yadav, Janata Dal (U)'s Sharad Yadav, Lok Janshakti Party (LJP) president Ram Vilas Paswan, Union minister Premchand Gupta, and BJP leaders Shahnawaz Husain and Rajiv Pratap Rudy. "The Indian politician wants to look stylish without appearing ostentatious. He does not want to go before the people decked out in garish designer wear," says Rahman. His USP for political clients: style and comfort, minus frills. 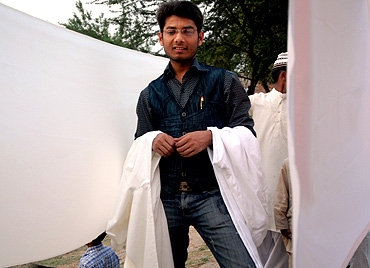 Rahman's tryst with the political set began in '03 when fellow Bihari Laloo Yadav asked him to design a kurta-pyjama for his visit to Pakistan, a nation where male sartorial style is taken seriously. "Kurtas have an annoying tendency to fall unevenly if the wearer has a paunch," reveals Rahman, "but the one I designed for him, made of Chinese linen, took care of that problem." The RJD chief was so impressed by the comfort, the flattering fit, as well as the understated elegance of Rahman's creation that he remained a loyal customer. He also spread the word, and orders began to pour in from other politicos. Rahman is now working frantically at his Delhi studio to complete orders for clients preparing to hit the campaign trail. His kurta-pyjama could set one back by Rs 12,000. "The cost depends on the fabric the wearer picks," says Rahman, who offers his customers a choice of cotton, silk, Irish or Chinese linen, or the finest khadi with a high threadcount. "Lalooji insists on khadi or linen kurtas, Sharadji sticks exclusively to khadi," Rahman reveals. All his clients stick to white and off-white kurtas, no matter what shade of political opinion they profess.

While Rahman wins over netas with his mantra of minimalist chic, Colombian designer Miguel Caballero, aka the 'Armani of armour', is wooing Indian politicians with the promise of garments that protect without adding ungainly bulk to the political silhouette. Cannily timing his entry on the Indian power-dressing scene with the Lok Sabha elections, he launched an exclusive range of lightweight bulletproof body armour in India last month. Caballero, whose international clientele includes Venezuelan president Hugo Chavez (a man who does need to worry about his safety), has already won himself orders from several well-known Indian politicians, according to his Indian distributor Shivani Nath. "Our list of Indian clients is being kept confidential for security reasons," says Nath. 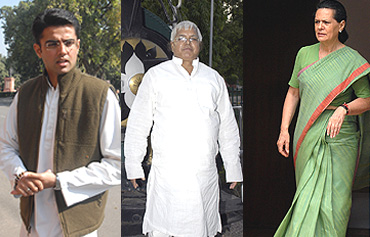 Sachin’s poll gear consists of khadi and sneakers; Laloo in a Rahman kurta; Sonia in one of her trademark saris

Unlike the body-armour suits currently available in the market, which have bulky, built-in Kevlar plates, Caballero's designs are flexible, heat-resistant and comfortable to wear. Traditional body-armour suits can weigh up to 7 kg while his lightweight ones are less than half of that. They have been tested and found effective against ballistic weapons ranging from revolvers to Uzi submachine guns. Marketed in India under the euphemistic tag of 'Discreet Inners', Caballero's creations are not available online or in stores. Potential buyers have to get in touch with Nath, and be prepared to shell out anything from Rs 30,000 to Rs 2 lakh.

One politician who should become a customer if she isn't one already is AIADMK empress Jayalalitha, who for years sported a voluminous cape that was said to cover a bulky bulletproof vest. Caballero's 21st century armoured wear would be barely visible under her sari blouse and would blend with her distinctive 'election' style. A politician who seems to give as much thought and care to clothes as strategy, the diva favours dark-coloured chiffon saris in cobalt, navy blue, deep maroon and dark green for her rallies. In their own distinctive ways, other women politicians are also dressing up for the elections. In contrast to her mother-in-law Indira Gandhi, who used to specially order thick, south Indian cotton saris to protect her from the heat and dust on the campaign trail, Sonia Gandhi favours light, superfine Andhra 'Upada' khadi saris. Or else, opts for a sari from whichever state she's visiting on a campaign. If it happens to be Kashmir, though, she invariably wears baggy, long-sleeved salwar-kameez.

Renuka Chowdhury, minister for women and child development, who's busy campaigning in Khammam, Andhra Pradesh, these days, admits she adopts a "regular Mother India look on the road, in cotton saris and open-toed sandals". Chowdhury adds that apart from drinking gallons of water, she also favours full-sleeved blouses and a cricket hat to protect herself from the harsh summer sun. BJP leader Sushma Swaraj sticks to her familiar wide-bordered saris plus her trademark big bindi on the campaign trail, never wavering from her carefully cultivated Bharatiya nari image. Trinamool Congress chief Mamata Banerjee, on the other hand, puts on the dishevelled "daughter of the soil" look, in her crumpled Bengal tangail saris. To keep her stamina, the firebrand Bengal tigress gets on a treadmill every day. "I have to keep fit to fight the CPI(M)," she says. Mamata eats just once a day, and avoids spicy food and rice, ever since the hunger strike in Singur wrecked her digestive system. But she does keep a box of chocolates in the glove compartment of her car, for a quick energy boost. BSP chief Mayawati dresses to impress and dazzle at her rallies, in her diamond solitaire ear studs and designer salwar suits. She reportedly likes to unwind at the end of a long, hot day with a large plate of dahi bhalla.

Young Congress MPs Jitin Prasada, Sachin Pilot and Milind Deora all take pains to project the aam admi look in white khadi kurta-pyjama—pretty much the same as their daily uniform in Parliament, except for comfortable sneakers replacing chappals. But one Congress candidate who's completely changed his wardrobe is the party's new man in Thiruvananthapuram, Shashi Tharoor. The dapper former international diplomat has mothballed his dark three-piece suits, and gone 'native' with a vengeance, polishing up his shaky Malayalam and taking to the hustings in pristine white cotton mundu and shirt. It remains to be seen if he'll have to get those suits and ties out again, but until then full marks to him for trying hard, perhaps too hard....