We don’t aspire to utopia, but have a right to resist corruption 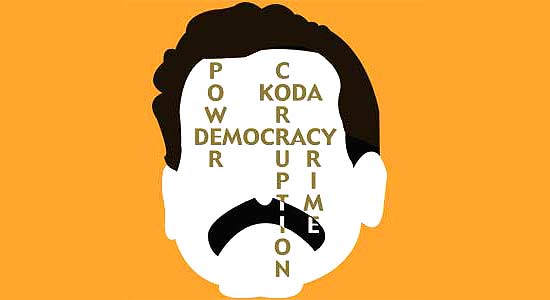 Despite all the hullabaloo in the media about the former Jharkhand chief minister’s unexplained riches, no Bharatvaasi seems to have taken much notice. The average Indian has taken this scam also in his stride, as stoically as that young politician himself. Ironically, Madhu Koda is from the same state which has produced another current phenomenon. It is an entirely different matter that unlike his compatriot, Mahendra Singh Dhoni can account for his millions to the IPL and allied sources. But Koda is another kettle of fish altogether. His antics form a new chapter in our long, shameful history of corruption in public office. Before he was arrested, he had the temerity to ignore repeated summons from the Enforcement Directorate. He continued blithely with his election campaign, and even chose to attribute his arrest to a pre-poll conspiracy. The man can certainly teach a lesson or two to our budding politicians on how not to get unduly excited by national aberrations such as the CBI or the ED.

Close on the heels of the Koda story comes the report that Transparency International has “awarded” India the 48th place among 180 countries in international ratings on the Corruption Perception Index. The more corrupt ones include such bad eggs as Pakistan, and you will agree this is not exactly an agreeable league to be in. Mind you, this is just a ‘perception’, and we know how, in real life, perceptions leave a lot more to our imagination. Till now, as far I know, the prime minister or his advisors have not said a thing about this rating. This is unfortunate, but understandable, because of the embarrassment this causes to them and to the values they are required to uphold. We should deem it a small mercy that neither the PM nor the FM has yet given a clean chit to Koda with an eye on possible future political compulsions.

I will be grievously wrong if I say India has a monopoly in corruption by public servants. Many other countries, including the US and UK, had got adverse notice in the recent past. Interestingly, in Indonesia, where corruption levels were very high and which created a formidable anti-corruption agency called the Komisi Pemberantasan Korupsi, members of this high-profile organisation were themselves accused of wrongdoing a few months ago. Thanks to all my travels, I have come to realise that misdemeanour in high places has become common. I am only anxious that, given the ubiquity of corruption, we should not slip into unwise complacency, especially when we are fast rising in international esteem for our admirable handling of the economy.

I am convinced that it is no longer realistic to expect the government to take the lead in tackling corruption. A lack of faith in honesty as a viable vehicle for power cuts across party lines. The Election Commission had once given a glimmer of hope that political parties would not be allowed to triumph at the hustings solely on the basis of economic heft. This has been belied by reports of how venal elections have become in the past few years. I am firmly of the opinion that from now on no party in power can be unseated unless it is simply dumb. This is because those at the helm have now the ability to raise the resources needed to buy votes on a massive scale. The mad scramble for the number of positions available in a ministry, that too for so-called ‘lucrative’ portfolios, explains this, albeit only partially.

Unmasking and then displacing a corrupt government has become a Himalayan task. The common citizen has to fend for himself by refusing to pay a bribe to obtain a service that he or she is entitled to. This is possible only if a government that claims to be at least minimally dedicated to helping the poor pledges that basic public services will be delivered at prescribed prices, and that a citizen would not have to pay a pie more. I have in mind things like birth and death certificates, ration cards and caste certificates, as also grants of subsidy in times of natural disasters. Will Manmohan Singh, an epitome of integrity who can be held up as a good example even to the most upright civil servant in the South and North Blocks, take this up as a challenge? He needs to tell all CMs that central fiscal assistance will depend on the progress made in eradicating grassroots corruption. I quite understand that a government totally free from sleaze is a utopian dream. As elected representatives, do not our legislators owe fulfilment of this barest of promises to our people? This is clearly not a plea on behalf of the rich or the middle class. It is an appeal that is in keeping with what our rural masses demand, but who do not have the clout to be heard.

The Heat Of Alien Fires