Two hours of cleavage shots and swimsuit models might draw the crowds but the meagre plot and pathetic acting doom the film. 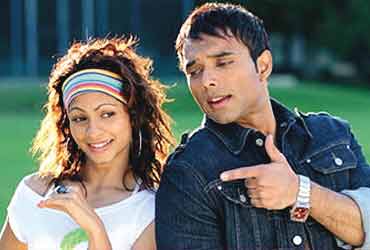 This Arjun Sablok-directed star-child vehicle falls flat on its face in its attempt at sex comedy. Two hours of cleavage shots and swimsuit models might draw the crowds but the meagre plot and pathetic acting doom the film. This movie is apparently for the college crowd, but it's hopelessly out of touch with its target audience. It's hard for anyone to identify with the poorly conceived characters, let alone like them. Neal (Uday Chopra) is happy to let his parents choose his wife, but wants to sleep with 21 women in the three weeks before his wedding. But the Don Juan can't move beyond brief flirtations with any of his firangi conquests. In fact, Abhishek Bachchan makes a much better playboy in the briefest of cameos, escaping with the finest girl and the coolest line in the film. Nikki (Tanishha) is a booty-shaking, alcoholic, table-dancing, strip-poker playing Canadian brat whose wardrobe looks like it's from an underwear catalogue.

Tanishha strides around in a bra and her acting confines itself to high-decibel screeches every few minutes. Uday Chopra is frankly embarrassing in his attempts to pull off a Shahrukh impersonation—his version of those trademark SRK cheeky one-liners and impish grins come off like arrogant smirks and punchlines that never connect. The chemistry between the two is non-existent and the dialogue strikes one false note after another. The plot borrows heavily from better films like Pyaar To Hona Hi Tha and Dilwale Dulhaniya Le Jayenge. The blend makes for an indigestible, half-cooked khichri.

There are a few bright flashes. There is Happy (Gaurav), the sardar-with-a guitar whose wistful strumming provides much-needed comic respite. The cinematography is...