Naya Savera, the waste management project with a social spin-off 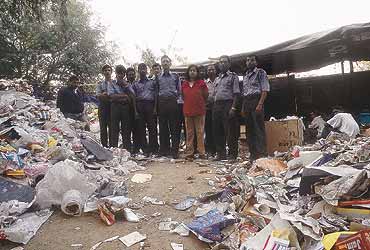 outlookindia.com
-0001-11-30T00:00:00+05:53
Technology is cold and research labs ivory towers of fantasy. Putting this myth on its head are two professors from the Indian Institute of Technology (iit) Delhi, who have spun off a not-for-profit waste management organisation called Naya Savera (New Dawn). It isn't often that a classroom exercise grows into a project that gives permanent livelihood to people, many of whom have lived on the edge of survival for years as daily-wagers.

When G.V. Soumitri, associate professor at the Instrument Design and Development Centre at iit Delhi, gave his class an assignment in 1998, he had no idea he was setting into motion a process that would culminate in an ngo. The students were asked to provide a solution to the garbage problem in the campus and the solutions suggested went beyond garbage collection and disposal. Instead, they advised waste segregation at source and then composting the kitchen waste on site. The medical waste would go to an incinerator and that of any value sold.

Impressed by the robustness of the solution, iit asked Soumitri to carry this out as a 200-house pilot project. Technical help on composting came from Padma Vasudevan, professor at the Centre for Rural Development & Appropriate Technology at the iit. With this twin engine firing, the project began with a grant from Maruti Udyog, dcm Sriram Ltd and the Foundation of Innovation for Technology Transfer. Scooters India Ltd donated two three-wheelers instead of money.

The professors were lucky to get an enterprising graduate in O.P. Singh as a supervisor and he put the workers' team in place by hiring beldaars or daily-wagers. Then followed a period of training for the team in waste segregation and composting. It took about a year for the rough labourers, used to an unstable life, to turn straight, but they did. Says Soumitri: "Initially, after pay day some of them would disappear for some days." Not used to seeing almost Rs 3,000 together, they would go on a drinking binge. But when at the end of the next month they found their money cut for the days missed, they began to realise the importance of regular work.

The work, apart from a regular income, gave them respect and self-esteem. The group became experts in composting as well. Seeing the pilot's success, the entire waste management of the iit campus with 1,600 houses, hostels and canteens was handed over to the group in August 2000. Sometime in the beginning of this year, Soumitri and Vasudevan decided to spin the boys off into an ngo to disseminate their expertise for projects outside iit as well.

Naya Savera was formed in April this year, aiming to be a total solution provider for waste management, and give the labourers a regular lifestyle.

Already, Naya Savera has impressed many. It got the Airport Authority of India contract for 400 houses in October and has just earned the iit contract for another year. Talks are also on with dlf, Sainik Farms and the President's Estate. Wanting to propagate what they have learnt, Naya Savera also trains people in waste management. For a fee these waste management experts (most of whom are illiterate) have trained many at the Neemrana Fort Palace and Larsen & Toubro Ltd, among others.

Naya Savera hopes to remain an organisation with a heart. They have pledged not to employ anybody for less than the minimum wage. To keep the motivation levels high, every time a new project begins, one of the workers is given the option to upgrade to a supervisor—it also means he has to increase his skill-set and become more responsible.This also comes with a hiked pay packet. The benefits of regular work has had spin-offs on their personal lives as well. The workers' kids go to school now and they are looking at medical and life insurance for themselves.

Work at Naya Savera is on to consolidate the effort and the next thing on the agenda is marketing of the 200 kg a day manure produced on the campus site. To contact Naya Savera call G.V. Soumitri at 011-6591153 or Sarvinder Kohli at 98104-29441; e-mail: soumitri@iddc.iitd.ernet.in.

Slices Of The New Pie Chart