It's raining jobs in the services sector, but only the urban educated get it 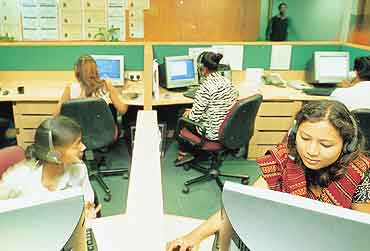 outlookindia.com
-0001-11-30T00:00:00+0553
It won't be wrong to say that even India's employment story began only after 1991. Before reforms, jobs happened fairly regularly only in the organised public sector. Once liberalisation kicked in, the private sector emerged as a lucrative alternate employer, salaries shot north, job security went out of the window and words like downsizing and VRS became popular.

Slowly agriculture stopped being the predominant source of employment even for the poor. In the urban areas, MNC jobs and dollar salaries became a happy reality. The information technology boom birthed sunrise industries with big employment potential. Falling interest rates and easy credit together with the impact of globalisation on the secure tenure of employment helped the entrepreneurial spirit to flourish too.

If there is one industry that has been shaken and stirred by liberalisation, it is the hiring industry. For better and worse, the job market today is far more dynamic and competitive than ever. One enthusiastic headhunter, who's predicted that the white-collar urban job market will grow at a whopping 30 per cent this year, says it's rocking. Especially for the services sector, liberalisation's biggest success story. Today, this sector contributes more than 50 per cent to the GDP. According to the '99-00 NSS of our total workforce of about 400 million, almost 23 per cent are employed by the services sector. That's up from about 19 per cent in '93-94.

Among the services sector, BPO and ITES businesses are booming. Today they hire close to 2.4 lakh people and are expected to add another 1.8 lakh to their pool this year. Says an advisor to the Planning Commission: "Liberalisation is visible in pockets like Bangalore and Noida. Here huge jobs have been created. But the point is, are they being created fast enough?"

Maybe not. According to the plan panel task force on employment opportunities, during '93-00, while the number of jobs grew annually at 0.98 per cent, the number of people joining the workforce grew faster at 1.03 per cent. Add to this the fact that India's potential working population in the age group between 20 and 60 is growing at 2.5 per cent. This points to a deep wedge between the growth in jobs and the workforce.

In fact, many economists are even calling this a period of jobless growth. And a high growth at that. The sole engine of employment growth has been the services sector that is fairly exclusive when it comes to job creation. "This sector offers hardly any productive growth at the lower levels, for example those who are employed as security guards and delivery boys experience income stagnation. They might be breaking the poverty line but nothing else beyond that," feels Subir Gokarn, chief economist, Crisil. Others contend that the services sector creates many jobs because of its linkages and therefore is more inclusive. Both agree though that for a sustained growth in jobs, the manufacturing sector has to pick up. It has in the last couple of years. "Unless you get a momentum in industry and unless it begins to absorb people there will be a overhang of unemployed youth that could lead to social tensions," says Gokarn. 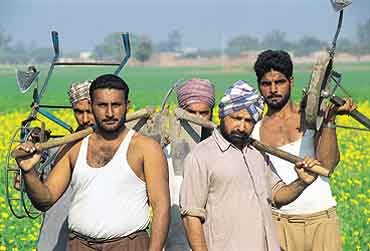 When an economy transforms itself from an agricultural to a non-agricultural, a major restructuring is inevitable. When the government decided to no longer be the largest employer in the organised sector and restructure its own establishments due to cost and productivity considerations, many lost employment, while some found new avenues of employment. Today the market has gone beyond that simple restructuring. It talks of employability and not employment, quality of employment not quantity and creation of employment opportunities as opposed to jobs.

The reformists argue that a father might lose his job but surely his son will get one and for each company that shuts down bowing to competition, another opens up. In the private sector lawful hire-and-fire exists—companies have the confidence to hire and at times over-hire because they know they can downsize if business does not take off. Secondly, even if lifelong employment has ceased to exist for many, salaries have gone up by an average of 10 per cent annually in urban areas. Even the wage rate has risen about 3 per cent in the last five years, which is higher than the increase in the previous ten. According to Planning Commission data, there has also been a 2 per cent rise in rural employment over 1994-2000.

Yet, paradoxically, the unemployment rate is up at 7 per cent or 35 million people. That is also because rural employment is defined as work for a minimum number of days. So even if you are employed for three months in a year, you are recorded as employed, while you might be starving the rest of the year.

While it is true that India is not shining for all, it's equally true that several pockets of the populace have reaped the benefits of job-creating reforms in the past decade. Could 20-year-olds ever dream of earning Rs 10,000 a month a decade ago armed with just an ordinary graduate degree? Would a 30-year-old salaried person have started out on his own without a family business to back him? The opening up of sectors like insurance, banking, telecom and ites together with a retail boom has added a never-before zing to the job market and will to continue to do so in the future.

The next 10 years will be critical in finding a way to integrate the rural workforce into this growth story. Thanks to the highway programme and rapidly prospering cities, the rural population is mobile and able to seek employment outside the farm. Economists feel that there is enough unmet consumption to generate livelihood opportunities for the rural workforce. They will emerge from the rural areas once industries like food processing and telecom together with health services, education and roads come to the villages.

What began in the cities has to reach the villages if we a want happy ending to our employment story.