A poll-ready Modi rolls out his Vivekananda yatra carnival. All Gujaratis are invited. 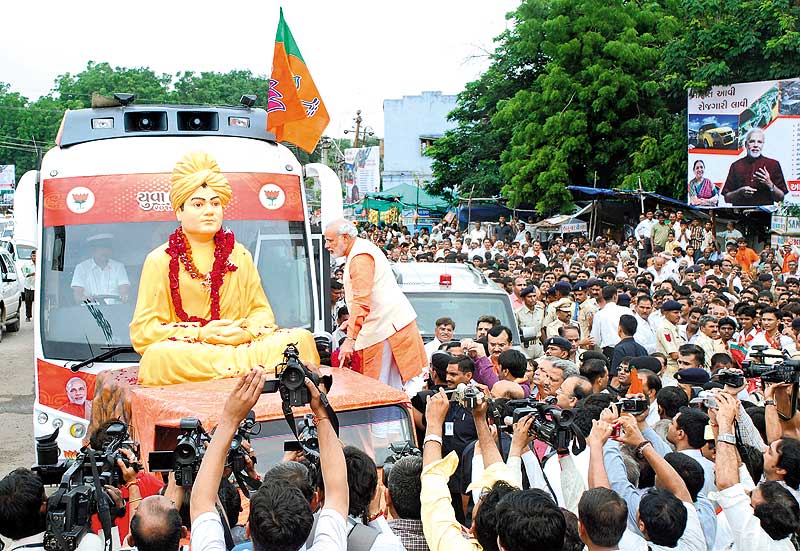 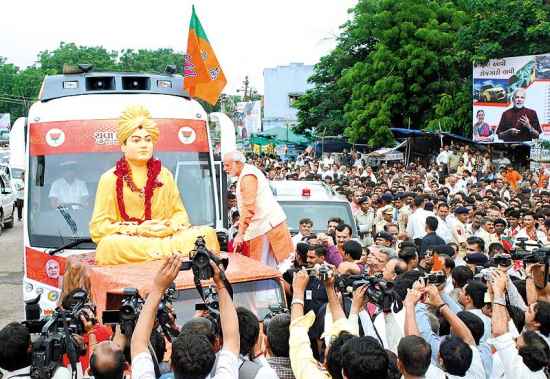 The cult of Narendra Modi holds sway on both sides of the Sabarmati. A decade after he swept to power, the people of Gujarat still rush to see him, are still in thrall of their chief minister. Needless to say, he’s already in with a headstart for the assembly polls coming this winter. Five years ago, in 2007, the rest of India saw the curious sight of the faithful bobbing up and down in Modi masks. In 2012, the props have changed. Modi now aspires to the aura of a philosopher-thinker, like Vivekananda. On the campaign trail, following his ‘Vivekananda yuva vikas yatra’ is an experience in itself.

District: Banaskantha. Time: 1 pm. It’s hot and oppressive but a large crowd has gathered in Diodar. The build-up to Modi’s arrival is akin to what happens before a rock concert. The stormtrooppers are there on motorbikes, revving up their machines in formation to escort the rath that moves behind a huge statue of Vivekananda. Each biker is costumed for the part: bright orange T-shirt, the visage of Vivekananda in front, on the back Modi in a thoughtful pose. Near the entrance, there are several youngsters dressed in brand new ochre robes and turbans, Vivekananda style. Girls with pots on their heads wait on the side. On the stage, there is live singing. A few speakers engage the crowd. Then the drums begin, the sound technicians amp up the sound to a thumping beat. Bharat mata ki jai. The man has arrived!

Modi strides up on stage, accepts a few turbans and wastes no time in delivering a knockout performance that the audience loves. Animated faces look up at him. Modi makes the usual cracks about the Delhi sultanate and then posits himself as a man of peace, who has the love of the praja (people) and the inspiration of Swami Vivekananda. “Has anyone tried to turn his dreams into reality? The six crore Gujaratis will do that.” Do you now get water? Yes, cries the crowd. Do you get electricity? Yes. Is your road ok? Yes, yes, it is. Are you happy and satisfied? Yes we are. “But I am not. I imagine greater things and greater progress for my people,” he says. Then a joke that has the “praja” laughing. “People steal gold, silver, diamonds. Does anyone come to your house to steal a sack of coal? The Congress does and then it uses the CBI....”

In 2007, Sonia Gandhi made the tactical mistake of describing Modi as a “maut ka saudagar” (merchant of death), a statement he turned on its head to counter-attack the Congress and present it as an affront to Gujarat. He also made much of her Italian origins. She is expected to kick off the Congress campaign on October 2 but the party advisory has been just a few rallies each by Sonia and Rahul. “They can’t take on Modi on his turf,” says a state leader. The more sensible option for the Congress would be to fight a low-key election, focusing on local factors. A scattered contest that they hope and pray will get some cohesion, based on the fact that the Congress still has a traditional votebase in Gujarat.

Modi’s Vivekananda yatra is an exercise in deploying a well-oiled state machinery and keeping the cadre motivated to ensure polling and booth management is efficiently done. The CM is extremely efficient when it comes to pitching the rhetoric in a particular direction. Currently the pitch is that Modi unites, it is the Congress that divides: “Gujarat has a history of peaceful elections and you will ensure that the coming polls don’t get heated up. The Congress plans to divide brother from brother. The BJP unites all of you....” On September 19, at 6.41 pm, Modi tweeted: “On the occasion of Samvatsari, let us embrace forgiveness & compassion & spread harmony & brotherhood. Michchhami Dukkadam.” (A traditional Jain greeting on the day, asking for forgiveness.)

The juggernaut moves on. In Radhanpur town, the entire population is out, stalling all movement. A truck moves playing Maa Tujhe Salaam..., sung by the ubiquitous A.R. Rahman. The carnival-like atmosphere is similar to the mood that prevailed in the early days of the Anna Hazare agitation. There are roadstops on the way and the next big meeting is in the Sankeshwar Jain temple complex. The rhetoric takes a subtle communal shift here. Modi says the Centre does not offer any relief on cotton. “But they give relief to meat packers/traders. They want to turn Gujarat into a katalkhana (slaughterhouse). They call it the pink revolution....” 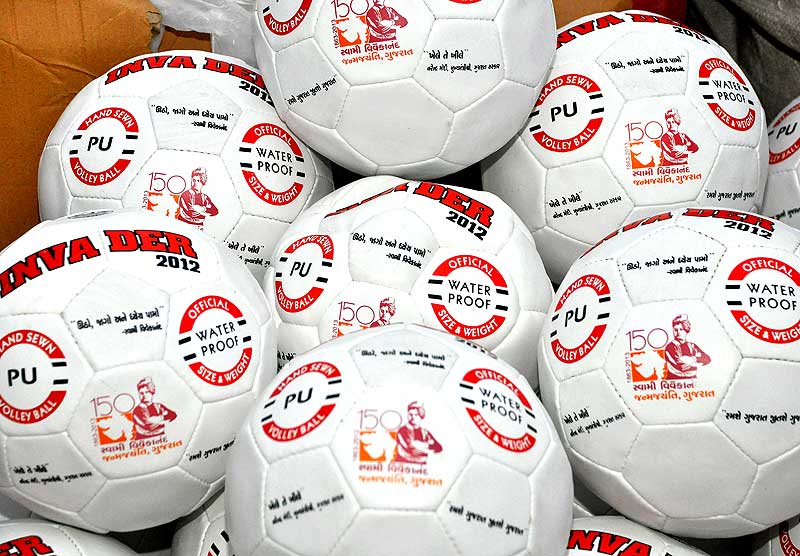 At the Sankeshwar Jain temple, the rhetoric takes a subtle shift, “They give relief to the meat packers, they will turn Gujarat into a katalkhana.”

The traps are in place, the Congress can walk into it, engage in a jousting session that would surely immediately be projected as an insult to Gujarati pride, or avoid any  engagement on communal lines. Modi has also cranked up the volume on another front, having already declared that the Manmohan Singh regime is “for the foreigners, by the foreigners, of the foreigners”. He’s framed the FDI-in-retail debate thus by asking “how many Italian shopkeepers are coming”. He’s quite the master of the sly innuendo and the direct assault, turning it up or keeping it low-key. It’s all there even as we speak—a subtle communal barb, a well-crafted joke on Coalgate, a dig about foreigners, a promise of greater things to come in his reign, the perpetuation of the regional identity posited against the “Delhi sultanate”.

A day before, another Modi is revealed in Gandhinagar where he is addressing an industry convention at a massive, gleaming, state-of-the-art auditorium he calls the Mahatma mandir. (From Gandhi to Sardar Patel to Vivekananda, they are all icons Modi has appropriated, convincing many in Gujarat that he is part of the tradition). Modi first speaks in English for the foreign guests and then switches to Hindi. He says suggestively: “Leadership ko lekar bahas chal rahi hai (There is a debate on the leadership issue). I believe you can make leaders by training them. I make all my ministers undergo a week-long training....” (An advance warning perhaps of what lies in store for national leaders of the BJP!)

But away from the crowds that follow him, is Modi still clicking on the ground? In the course of a separate journey through Kheda, Anand, Godhra and Dahod districts, it’s rare to find any anti-Modi people, except for the Muslims who are clear they will vote against him. In Salon village of Kheda, an OBC farmer mutters that he voted BJP last time but will not do so again as “they are for the rich and do nothing for the poor”. After that, in village after village, the Patels say they are with Modi “like a rock”. In Saurashtra, they say, some Patels may go the other way because of Keshubhai’s departure from the BJP. In this Patel-dominated stretch, though, they are all fans of the CM. In Dahod, where the 2002 riots had seen many adivasi attacks on Muslims, the situation is unclear. The adivasis say their sarpanch will decide who to vote for. But Godhra’s townspeople say the adivasis are more conscious than ever now of their Hindu identity. Modi may have defanged the VHP-RSS structures, but the administration still does the job for him.

Ode in Anand district was one of the scenes of the big massacres of 2002—among the worst in rural Gujarat. In April this year, a court convicted 23 for the bloodbath. On March 1, 2002, 23 people, including nine women and nine children, had been burnt to death in a house in the Pirwali Bhagol area of Ode village by a mob. Today, the village looks peaceful and the many Patels gathered in the square near the bus stand say they aren’t upset that some of their community members have had to go to jail for the riots. As Rajinder Patel, a government servant, says, “Modi raj will continue because he is a revered figure for us.” Another young man, chatting with a Muslim resident, says quite nonchalantly, “Let’s face it. Modi is quite a man.”

Down a narrow street we meet Saiyad Rafiq Ghulam Rasool, who walks through the lanes and points to the still abandoned homes, burnt buildings, repaired homes. The final stop is that house in Ode where the entire family was burnt alive. It is now a ruin. In a plot across the house, a Ganapati puja is in full swing. Lalabhai Patel saunters across and helpfully offers the information that the land on which they are doing puja belongs to the dead family. “They have all disappeared. They were like our brothers. We don’t know what happened that day. I don’t know why the police has sent two of my uncles and my brother to jail for what happened.” The conch is blowing at the Ganapati puja, and well-dressed women and children walk in and out. This is Modi’s Gujarat that prospers under him.