Spielberg is making a film on my life: ‘The Man Behind the Plastic Mask’ (Italian version: ‘L’uomo Dieto La Mascherina di Plastica’) 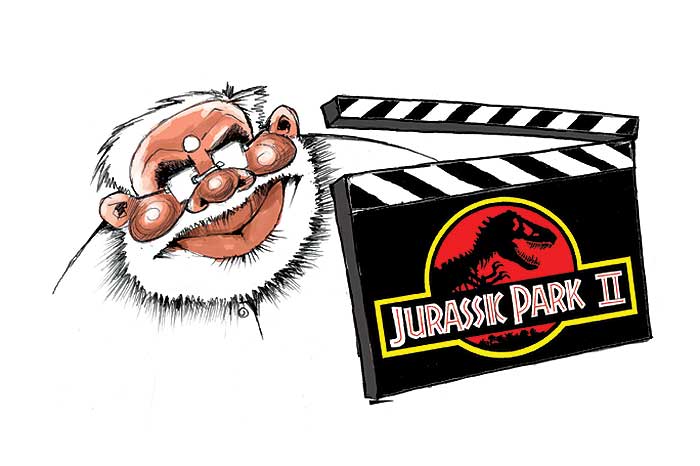 I’m sure my detractors (Nitish Kumar and Sonia Gandhi included) will be livid when they come to know of this. But Steven Spielberg is making a film based on my life and times. Bollywood director Prakash Jha also approached me but our brand ambassador Amitabh Bachchanji (who was holidaying in the Gir sanctuary pretending to be the king of the jungle by walking on all fours) advised me to stay clear of the film director from Bihar. “He will include Katrina, who claims she looks like Soniaji, in the cast and mouth ‘maut ka saudagar’ in the dialogue for special effect. So, Modiji, take my advice, please opt for Spielberg. And, yes, if my sources in Cannes are to be believed, he has a soft corner for your favourite dish, which I understand is khichdi....” Just as the Big B said this, the line got cut and his mobile has been out of range ever since. Which is why I had to wish him and Jayaji on my blog on their wedding anniversary (June 3).

Anyway, that aside, since I have great respect for Amitabhji, I was quick to give my okay to Spielberg. He, incidentally, assured me that the film will be based on the 235-word profile on my official website (www.narendramodi.in) and that he would not take inputs either from Wikipedia or from activists like Teesta Setalvad. He also revealed something which even Hollywood reporters are not aware of: that he has signed George Clooney to play the lead role although he would be wearing the Modi mask (from my 2007 assembly election campaign) for most of the film except in a song-and-dance sequence for which Philip Glass has composed the music inspired by Anu Malik’s ‘Love You Raja’ (which sounds quite like the title track of the 1961 Hollywood hit, Come September). Incidentally, the girl chosen for our item number is Kylie Minogue who recently shook a leg in the Akshay Kumar-starrer Blue. Now, you may wonder why Steven (we are on first name terms now...he calls me Narendra!) wants to have songs in the movie. Well, he says that without that the film will lack the “Bollywood touch”. Meanwhile, Manish Bardia, chief executive of the Ahmedabad ad agency The Moving Pixels Co, which designed the Modi mask, is working overtime because in one crowd shot Steven wants 50,000 masks.