Narendra Modi: The Bachchan of Screen and Kohli on Field

Modi, at the moment, is larger than life who many believe can take on inimical neighbours single-handedly, vanquish the corrupt and liberate the country from poverty. 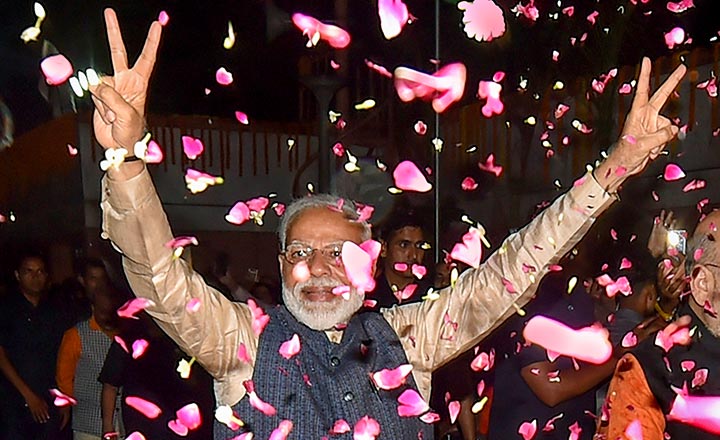 Votes were cast. Ballots counted. The verdict is out. It’s time now for the nation to get back to work. Known to be a workaholic, none would know better than Prime Minister Narendra Modi about how hard he must work if he is to meet the challenges that await him. Being re-elected in a country notorious for being harsh on the incumbent has been no mean feat and credit is certainly due to the prime minister. But the euphoria over the stunning electoral victory must not cloud or distract from what is genuinely expected of the top elected official of 1.3 billion people.

For one, the position of prime minister is not a partisan one and Modi must now attempt to heal what has increasingly become a polarised society. This election has particularly been a bruising and divisive contest, and the nation is thirsting for reprieve from the rabid rancour it spewed and spread. It’s about time to put the political differences behind and close ranks.  Whatever be the ideological differences, the victor deserves both our good wishes and support in the true spirit of democracy. Modi too must reciprocate, rising over party considerations and giving the nation a government that serves all.

Half-measures will not do. Though Modi’s rhetoric and demeanour gave a sizeable majority of us a lot of hope in his first term, the jury is still out on what his real achievements have been. Modi’s renewed mandate gives him another opportunity to put the record straight and silence the sceptics. Among everything else, Modi and his cabinet must address the issues of rural distress and burgeoning unemployment, made infinitely worse by the lack of relevant skills, correct a croaking banking system, make better use of unproductive assets and whip into shape a rather bloated and ineffectual bureaucracy. Things that are awaiting his urgent redressal will obviously be endless.

To fix such myriad tasks in the next five years is a tall order. But as this election has shown, Modi has the unique ability of turning adversity to his advantage. Despite the best efforts of the Opposition, however disparate, he succeeded in scripting his own narrative that finally found favour with the majority. Modi, at the moment, is larger than life who many believe can take on inimical neighbours single-handedly, vanquish the corrupt and liberate the country from poverty. He is both Amitabh Bachchan of the screen and Virat Kohli on the field – heroes with few parallels.

As our prime minister, we can only hope and pray that Modi lives up to popular imagination. Even though the expectations around him could be high and a tad scary, they are not entirely misplaced. India, for far too long, has been patiently expectant of a rule that’s underpinned by the principles of good governance and development driven by an economic agenda of growth and self-sufficiency.

It would be foolhardy to believe though that Modi and his BJP will stop pursuing their core political beliefs and turn a new leaf the second time around. Neither will the Congress and the Opposition. It is very likely they will continue to oppose and obstruct the ruling party.  But it would be in everyone’s interest that ideological distractions are not allowed to derail growth and hold the country’s true potential hostage. Party affiliations should, after all, never be considered a greater priority than India’s collective prosperity.

This special issue of Outlook celebrates the strength and spectacle that is Indian democracy, unfortunately also singed with a bit of strife. Besides analysing the results to determine how and why the voters voted the way they did, we also look at what made Modi soar over the rest, propelling him to a renewed stint in Raisina Hill. More importantly, we look at the challenges that confront Modi and his new government.