The ‘ban’ on Aarakshan is just part of a long capitulation. The mob is the final censor in our country. 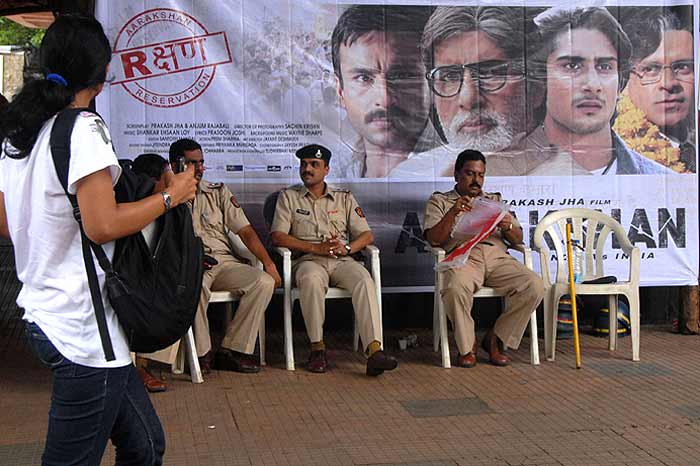 Aarakshan, Prakash Jha’s latest film, is not running in Uttar Pradesh. It’s been cleared by the censors but still audiences in the state can’t watch it because Mayawati’s government has a mistaken assumption that it shows the Dalits in a bad light. For filmmaker Rahul Dholakia, the ban rings a bell. Three years ago, he faced similar hold-ups when his film Parzania, based on the ’02 Gujarat riots, was set for release. Cuts were suggested and the censor certificate was initially denied till Dholakia sent the film to the revising committee. “However, even the eventual censor clearance didn’t mean my film could be screened in Gujarat,” he recollects. At the Goa Film Festival, goons obstructed the screening on the bizarre ground that the film had been “funded by Dawood Ibrahim”. In Gujarat, the multiplex associations refused to play the film “fearing riots and violence”. “It was humiliating to go begging for shows,” says Dholakia. Worse, he was asked by the multiplexes to get an approval from Babu Bajrangi, one of the main accused in the riots.

Documentary filmmaker Rakesh Sharma has a different story to tell. His award-winning film, Final Solution, also on the Gujarat riots, never faced any threat in a dozen screenings in that state. “But I have had problems in every other state,” he says. In JNU in Delhi, an open-air, late-night screening was obstructed by the ABVP. Members of the Hindu Jagaran Manch stormed a festival screening in Bangalore and intimidated the theatre owner. “Such extra-legal censorship is the bane of our lives,” says Sharma.

The films don’t have to deal with volatile issues. Fringe groups can stop screenings for much less. A few years ago, Madhur Bhandarkar’s Traffic Signal got on the wrong side of Himachal Pradesh. The state found the word “kinnar” for eunuchs objectionable because there happens to be a community of the same name in HP. “I had to let go of the revenues from the state,” says Bhandarkar.

India has a long history of filmmakers, especially those in the small, independent and documentary field, fighting extra-legal censorship as a routine matter. Anand Patwardhan’s documentary Ram ke Naam, on saffron politics, faced opposition even in the US—the VHP stopped its screening at the American Museum of Natural History. “Every state, community, political group seems to have a problem. At this rate, we’ll only be safe making cartoon films,” says Bhandarkar. “How many times will we end up toeing the line for each of our films?” asks Hansal Mehta, whose Dil Pe Mat Le Yaar angered a certain community.

Not On Our Watch

One of the first instances of this extra-constitutional protest was with Govind Nihalani’s Tamas in 1988. The film was taken to court, Nihalani was threatened and attacked by groups that felt Tamas would disturb communal harmony. “But the situation is 100 times worse now. The level of intolerance for contrarian views, the way cultural fascism is getting exercised, is deeply disturbing,” he says.

Documentary maker Sanjay Kak gladly concurs. Two years ago he had organised a private screening of his film, Jashn-e-Azadi, on conflict-ridden Kashmir, for a few close friends in Mumbai. Suddenly the cops knocked on his doors and seized the DVD. All because a “visible film personality”, as Kak prefers to describe him, had shot off an e-mail to the police alleging that it was a “jehadi film” and could incite trouble. “They didn’t investigate, didn’t even bother to find out what the film was about,” says Kak. So what does a filmmaker do in such a scenario? Most times, not much. Hansal Mehta was thrashed, his face painted black by some Shiv Sena youth leaders and he was forced to apologise for an innocuous dialogue in his film that the goons thought was disrespectful towards a community. “I felt violated and very alone but could do little,” he recounts. There are others, like Patwardhan, who have gone the legal way. What is heartening is that till now the courts have upheld free speech. “They have demolished, made mince-meat of arguments that a certain film breaches peace or threatens to create a law and order problem,” says Sharma.

Kak’s strategy has been to dig his heels in. “For every one non-show, there are 99 others that will happen. There are enough cultural spaces,” he says. Others believe in subversive, guerrilla-style distribution. Rakesh Sharma, for instance, has decided to deal with it by foregoing his copyright over his film. In fact, he launched a “pirate and circulate” movement, offering free copies of the film to people who were willing to make 10 more copies and distribute further. For him, the core issue is his work should be seen. “Copy, sell, barter, rent. The more these extra-legal censors try to bury the film, the more widely it should be seen. The more they suppress it, the more it should be out there,” he says about his cinematic civil disobedience movement.

So should Jha also distribute free DVDs of the film, making a mockery of the ban? Things are not as easy for mainstream movies that have big money riding on them. “These bans turn up just at the time of release, making the film a soft target,” says Nihalani. But what it does highlight is that it’s about time the film industry got united to fight such regular intrusions. “We should take the issue to the I&B ministry together, get a bill or law passed that no film cleared by the censor board will be obstructed,” says Dholakia. All are in agreement that these bans point to the utter redundancy of the censor board. “The government seems to have no political will. It’s letting its own organisation get undermined,” says Nihalani. Which is why many documentary filmmakers have stopped applying for a censor certificate, arguing that their films be brought under the purview of the Press Council instead.

But all is not lost. A month-long protest by secular groups years ago finally forced the administration to lift the ban on Ram ke Naam in Malappuram, a Muslim majority district in north Kerala. Nihalani recounts the support for Tamas from the progressive groups. “Dharnas were organised, a human chain was formed at Flora Fountain. Tamas opened up a debate on freedom of expression,” he recalls. Time now to start another.