Pooja Chauhan is one woman. But she spoke up for lakhs like her. 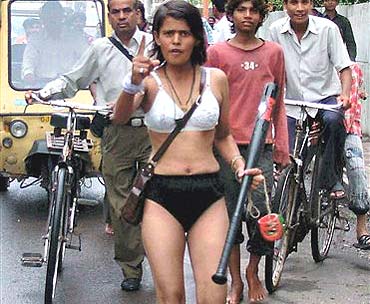 outlookindia.com
-0001-11-30T00:00:00+05:53
Pooja Chauhan, a young mother of a two-year-old, should be honoured by each one of us for having the gall to protest semi-naked in public against her tormenters—her husband and her in-laws, who were allegedly harassing her for not bringing in enough dowry and for bearing a girl child.

I shudder to imagine the depths of despair Pooja must have suffered before daring to take such a step. I feel ashamed to belong to a society where a young woman is forced to fight for her dignity by stripping down to her underwear and walking down the streets of a small town. What I find even more deplorable is that the authorities, instead of giving her shelter and compassion, chose to arrest her along with her tormenters, albeit on a separate charge of 'indecent exposure'. My blood curdles as I recall the number of times I have read and heard about instances where women of all ages have been stripped naked by village elders across the nation, and paraded through the streets for a petty mistake, or on cooked up charges. Does anyone ever get punished for that kind of 'indecent exposure'?

During the time I spent last year in Tihar jail (I was falsely and unjustly booked by the authorities in the Jessica Lall case), I was amazed to meet several hapless inmates, who were, in my judgement, completely innocent, and had been thrown behind bars after their husbands or in-laws connived with the police to harass them. Often, the woman in question was either an inconvenient burden, or had been 'used up' by all the male members of her husband's family and served no particular purpose in their lives anymore. They also would have no idea what charges they had been booked on or how long they would remain in jail. Pooja Chauhan could have suffered a similar fate, had she not found the courage to fight for her dignity with a 'silent protest march' against the indignities inflicted upon her. How different is that from Gandhiji's numerous peace marches against the injustices of the British?

There are Pooja Chauhans and women like the ones I met in jail living all around you, in every neighbourhood. Rich, middle-class or poor. They are living out a nightmare in the confines of their supposedly 'respectable' married homes. Most of them are mothers. Their situation is a blot on this fast-growing, wealth-producing nation that we are increasingly and volubly so proud of these days.

For several years in the '90s I ran a popular weekend column for The Asian Age called 'Very Personal'. I received hundreds of letters every week in which women poured out their personal, often sexual, secrets to me. What I faced was a torrent of sexual repression and torment. The writers were mostly from the 'upper echelons' or the educated class, if I may call it so. I was appalled to learn through these letters that, leave alone daughters-in-law, even daughters sometimes lived lives of shame and torment because they were being molested by their own father, brother or uncle. I felt helpless in the face of such injustice and sometimes would not get sleep at night after reading such letters. Many were unprintable and I still keep them with me in a little trunk. Some letters even reduced me to tears. I did all I could to give strength to these victims through my advice.

My time in Tihar brought it all back to me. The fate of the innocent inmates reminded me of these letters. The injustice of my captivity was nothing compared with their ordeal. Pooja Chauhan's story makes me feel the same way, and wonder how we remain mute witnesses to these real-life tragedies of epidemic proportions. Should situations like these not prick our national conscience?

There is a special message here for Indian men. Almost all NGOs across India that offer help to these victims of domestic violence are run by women. I fervently wish for the day when large numbers of Indian men—rather than just a few sensitised ones—wake up to what this motherland is going through and give her the respect, dignity and protection that she deserves.