Nagpur Oranges Are The Only Fruit

Modi is caught in the pincer of a paradox—his RSS-fed hankering for a Hindu rashtra and his own modern technocratism. Where will his balancing act lead India? 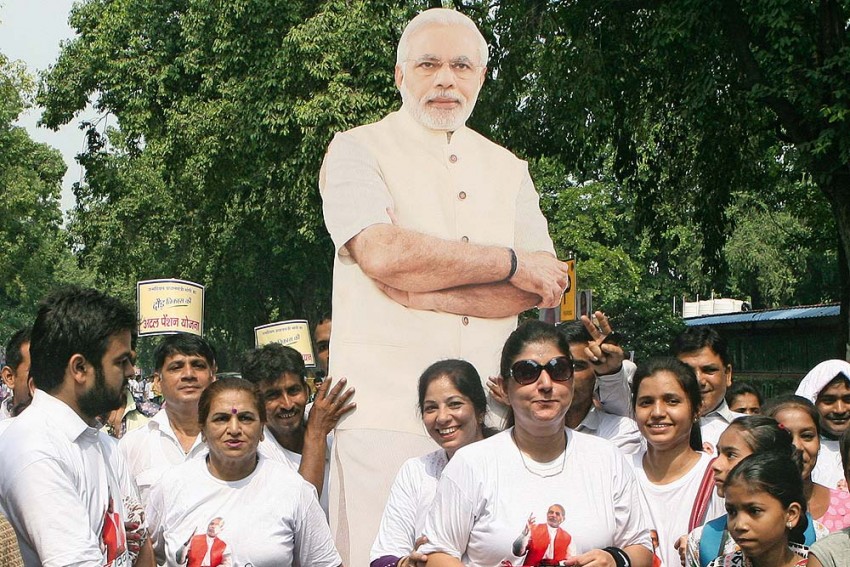 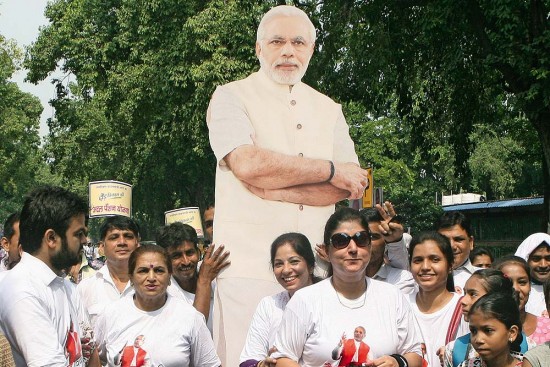 The crucial question that will make or break Narendra Modi and the Sangh parivar and their legacy is simple. Will the new policies set in motion by Modi’s government after the BJP’s remarkable win be conducive to the progress of the nation and the welfare of all its citizens? Can the new idea of India being propagated to replace the Mahatma-Nehru philosophy act as a hurdle to keeping the country together?

Sangh parivar spokespersons say with some justice that the Congress party had often reduced secularism to the concept of using Muslims and other minorities as a votebank to win elections. But that is no excuse for painting a diverse nation with the saffron brush. Nor does it justify the kind of declarations punctuating the political debate with vicious and downright communal rhetoric pigeonholing minorities, Muslims in particular, as lesser beings who must conform to the Hindu idea of nationhood or be penalised.

The reactions of Muslims to the large doses of advice they are receiving from the parivar has varied from offering their organisations’ cooperation to the Modi government, seeking shelter behind community leaders or plain defiance from men such as the Hyderabad member of Parli­ament, Asa­­duddin Owaisi, president of All-India Majlis-e-Ittehad-ul Muslimeen. Instead of de-emphasising his religious affiliation, he flaunts it by arriving at public events featuring him as a speaker more than an hour late because he has to perform his evening namaz first.

Modi’s dilemma is at two levels. As he has himself confessed, he has imbibed the beliefs of the RSS and still bel­ieves in the myths he digested at a young, impressionable age. At the same time, as he has shown during his long stint in Gujarat, he is pragmatic enough to keep his beliefs to one side to rule as an effective administrator. But as he is discovering each day, the nation is not Gujarat.

There is little doubt that Narendra Modi wants to leave his imprint on India’s history. He has the stamina, the will-power and administrative and political skills to help the country in its development and modernisation. Equally, he has immense problems and challenges to confront and among them, above all, is the sum total of his own beliefs which take him to a world of fantasy he has been nurtured on.

Modi is a paradox in many ways. By all accounts, he believes in the magic of ancient India, not merely in the wisdom the sages left us in the form of the epics Ramayana and Mahabharata but also in the celestial words of the Gita. His world encompasses an ancient world of many modern miracles.

Admittedly, these myths were part of his upbr­inging from a young age in the lap of the possessive world of the RSS. The organisation, in the Indian idiom, was both mother and father to him. And yet this diligent, impressionable young man, who left his wife and family to follow the rss’s command, not only learned the finer points of the political game but also acquired an obsessive int­erest in communication technology and used it to telling effect in his political career in campaigning and directly communicating with the people.

Modi faces a tough task—in a country with 172 million Muslims, he has to establish his Hindu credentials.

This paradox raises a host of questions. It came as something of a shock that Modi was willing to sacrifice the ministry of education—overseeing the entire field, from the primary level to the highest institutes—to please the RSS and appoint as its head a school-leaver to show his contempt for the entire intellectual community. The kind of absurdities that have been introduced in Gujarat schools is beyond belief. Yet, Modi does not spare a thought for the consequences. And reputed institutes of technology and administration are now sought to be smothered in the government’s embrace. The symbolism of Baba Ramdev dispensing his wisdom at IIT Delhi says it all. And RSS voices are being raised to paint IITs as elitist and in need of repair by imparting doses of Hindutva. The RSS weekly, Organiser, has thought it fit to denigrate the IITs, taken by many as the first shot across its bow.

Was it then his Gujarati genes that helped him connect with modern communication technologies to advantage? For a politician who likes to retain all the aces, social media has the great advantage of a one-way communication, with no hard questions asked of him. It is easier to ignore rude tweets.

The larger question on the horizon is more compelling. Is the Hin­dutva concept viable? The ideas that evo­lved into what became the RSS were ins­­­­urrectionary in nature. During the early decades of independent India, the Sangh parivar was an outsider looking in. Its electoral triumphs began in the states and it built up steam as Congress fortunes dipped. The Vajpayee government was in a sense a continuation of the Nehruvian enterprise, with the leader hiding behind the limitations of a coalition dispensation and Vaj­payee’s way with words was such that he was able to reconcile the contradictions of being an RSS person and a moderate.

Modi’s dilemma is that he has an overall majority in the Lok Sabha and is a very different person from Vajpayee. He has therefore to face the stark choice of a deeply convinced RSS man holding the highest executive office in the land called upon by his mentors to deliver on his promises. At the same time, he has a Hindu-majority country with more than 172 million Muslims, in addition to other important minorities, in which to establish his Hindutva credentials. On occasion, Modi is forced to pronounce Olympian-sou­nding edicts on citizen’s rights and equality but is powerless to act against offenders, be they MPs or mere party members.

The central paradox is obvious. India cannot be run as the obverse side of the Islamic State or caliphate. What direction will Modi take to translate the RSS’s concept of the golden age into reality? He still has the excuse of being a minority in the Rajya Sabha in order to prevaricate. The choice is stark. Is he willing to give up his own and the parivar’s sacred beliefs to govern the country effectively, even after packing research and historical organisations with RSS men? Will Modi’s concept of Hindu India fly?

(Among India’s most respected political commentators, Sur­endra Nihal Singh has been editor of The Statesman, The Indian Express and Khaleej Times, and wrote an autobiography, Ink In My Vein.)