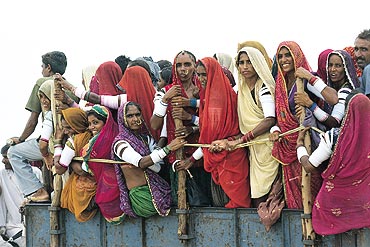 "The cows will have all left our camp in the next few days," says Ram Swaroop Swami, manager of the gou shivir. Eyes scanning the overcast sky, he adds: "We had over 30,000 cows here by peak summer this year." Charity by an affluent Rajasthani family, government subsidy, and the two tubewells had been the camp's fodder: "Now, thanks to the rain god, the cattle should have enough feed."

A belief that septuagenarian Sulaiman bundles into his bags as he readies himself for a long journey back to his village with his 33 cows. It'll take him and his cattle about a month to return to Rajmathai in Pokhran, Jaisalmer. But the journey won't be half as exhausting as the one he'd made from there to the cattle camp at Naal eight months ago: "I had landed here with starving sick cattle, the scorching sun had sapped our will to live." Jalu Singh Bhatta, also on his way back home, in fact, remembers how many people had given up fighting for life against the deadly drought just some months ago. In his village in Bikaner's Amarpura, families had begun smearing tilaks on the foreheads of bhakdi (non-milk producing) cows, and setting them free to fend for themselves, leaving the animals to their destiny: "Better to have your cattle killed by god than to see them die before your eyes."