My Trust Reposed In A Sort Of Decency, In Sainikji

Modiji, a peaceful, prosperous India must be inclusive; force has its limits and its dangers; and capital has a nasty habit of disappearing overnight 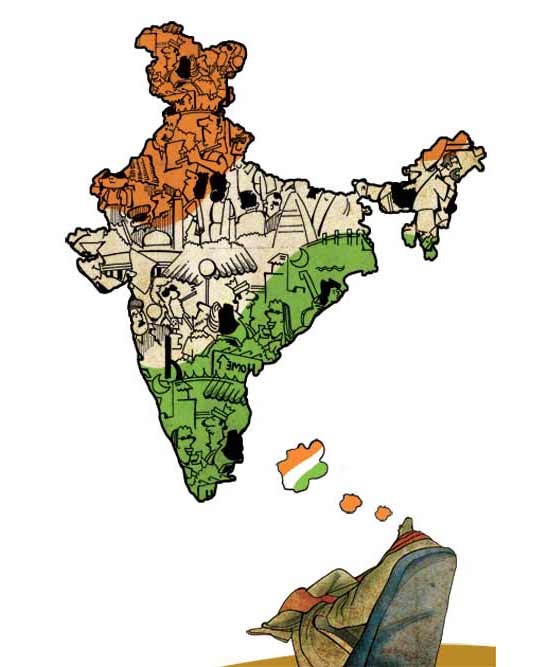 Illustration by Sorit
Tabish Khair May 26, 2014 00:00 IST My Trust Reposed In A Sort Of Decency, In Sainikji 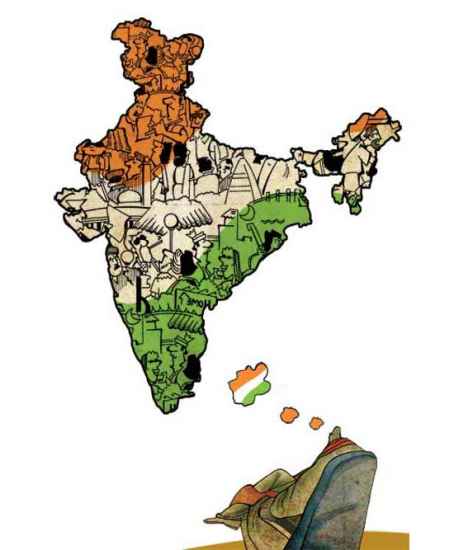 Like you, Modiji, my Sanskrit and Hindi tutor was a member of the RSS. He would put on his khaki shorts and go for lathi practice. He would also turn up, unfailingly, for Id dinners at our place, pointing out that he only ate at the houses of old Muslim families as they knew the value of cleanliness and hospitality. He would add that he could hardly eat with most Hindu families either, because “people have forgotten the old ways and only picked up the worst of the new ones”.

He was, unlike you, a Brahmin, but, like you, he did not believe in untouchability—I gradually learnt to admire his struggle against it and his inherited prejudices. He believed in a larger thing that he called mostly ‘Bharat’, but sometimes also ‘Hindustan’ or ‘India’. We knew him by his pen-name, for he wrote poetry in Hindi: Sainikji.

Sainikji did take care not to let our vessels touch his lips, pouring water down his gullet from a slight distance, and tossing mutton shami-kababs into his mouth with unerring accuracy. As long as he was alive, I visited him during my vacations at Gaya, just as I visited the other two teachers—both unsparingly dismissive of RSS ideol­ogy—who had left an impression on me. As long as I was in Gaya, my brother and I would go to Sainikji’s place for Diwali and Holi. Much of the Kalidas, Surdas, Meerabai and, above all, Kabir that I have, I owe to him.

I might not have written to you today if it had not been for Sainikji. I would have seen no reason to trust—and hence speak to—someone like you.

Unlike me, Sainikji would be celebrating today: you, an RSS protege, are now going to become prime minister. I cannot really celebrate as I was not impressed by your campaign or your past achievements, though I do not despair at either; I am willing to give you the benefit of doubt—for the sake of India and Sainikji.

There are many who shudder at the prospect of your leading the country; there are even more who are nervous, suspicious of what you stand for, and a bit wary of your reputation as a person who brooks no criticism. I hope your detractors are wrong, because I recall Sainikji as someone who wanted a prosperous and peaceful India. He associated this desire with RSS ideology, which I never will share, though it has nothing to do with me being a Muslim. But I do share the desire for a prosperous, peaceful India. I recall a doha by Kabir that Sainikji often repeated; it has stayed with me:

Nindak niyare raakhiye aangan kuti chhawaye/Bin sabun pani bina nirmal karat subhaye (keep your critic near you; build a hut for him in your courtyard/Without the expense of soap or water, he washes your heart).

I write to you in the memory of Sainikji, across our differences, because I believe that we are united by our desire to want the best for India. But you can’t do that without wanting the best for all Indians. There is no short cut. You might or might not agree with all these many Indians, and vice versa, but if you leave any of them out—or allow them to be treated unfairly—all of India will suffer.

During your acrimonious election campaign, I was not always convinced that you realised this. You needlessly attacked organisations central to our democracy and nationhood, such as the Election Commission. You sometimes behaved as if sending in the army and the police can solve all our problems. I am afraid you will be disabused of this method soon: it has not worked in Kashmir or Mizoram, and it is not going to work against the Maoists. If this is your preferred solution, then I am afraid you will plunge more of India into a kind of civil war. You will need to build bridges, not bomb them. Sainikji saw this, as did his great hero, Atal Behari Vajpayee.

Modiji, you can’t want the best for India without wanting the best for all Indians, in their diverse, diverging ways.

Like you, Sainikji resented some of the recent past and associated it, erroneously to my mind, with the ‘atrocities of Muslim rule’. I think I first understood the need for objective history in my bid to sort the chaff of RSS-ins­pired fiction in Sainikji’s version of history from the solid grains of fact. You see, ideological fiction is shaped by centuries of accumulated hate. You will need to stand up on the side of historical fact, even if it means opposing your own ideologues, your own inherited prejudices. History shows us how Muslims and Hindus—and so many others—fought and lived in harmony at the same time. Ideology  turns the complexity of history into a black-and-white narrative, trapping us in circles of hatred. I think Sainikji must have seen this, or he would not have made such an effort to relate to Muslims over their festivals.

One area where I differ from you, not as a Muslim or a secularist, but as a leftist, is in your understanding of economics. I see that much of your support comes from the urban middle business classes and their richer cousins abroad. I understand why they support you. Your vision of India—disciplined, developed, stable, open to investment—appeals to them. But there are two dangers here, both of which can cripple India.

You cannot reward your middle-class supporters—some from the rising lower middle castes—by creating a new ‘working’ class of ‘untouchables’ for them to bully. I am afraid that is what happened during the Gujarat riots, when lower- and middle-class Muslim businesses and businessmen were systematically targeted. This might have created space for some of your supporters, but it did not change anything in India: you cannot move some people up at the expense of other people. India, as I wrote earlier, is all Indians, each and every one of them.

As great a danger is posed by many of your NRI supporters, who expect you to liberalise India so as to profit from it. They want to invest, partly because they are Hindu nationalists and partly because it can offer them advantages denied to non-Indian investors. Where is the capitalist who does not favour a game rigged a bit in his favour?

The problem is that this has happened elsewhere: in South America, in East Asia, in Africa, even in Eastern Europe. Countries open up; they boom. Capital is ploughed into them, not as much by foreigners as by natives who have moved abroad. Then there is a hurdle; a political glitch, an economic slowdown, whatever. Suddenly these investors, with hearts in the ‘homeland’ but houses in richer countries, panic. Or they get fed up with lower rates of return. Capital is withdrawn; a minor economic blip turns into a major economic catastrophe. You see, most of these investors are patriotic only as long as the profit is good.

So finally, Modiji, you will have to re-examine many of your beliefs, at the core of which is the fantasy that there was, is, or even can be, a singular ‘Hindu’ identity: not just Indians, but Hindus are and will remain diverse. What you will have to aim for is the old notion of unity in diversity. For that, you will have to invest, fairly and fully, in every Indian. You will have to make each Indian feel that she belongs, and on equal terms. You will have to tolerate differences, because one billion Indians can only live differently. If you are as big a man as they say you are, you should be able to do it. Sainikji was a much smaller man, at least physically, but I think he would have wanted to do it and given it a fairly good shot.

A L’il Bird Told You