My Puppet, The Fanatic 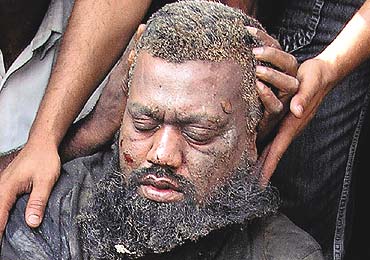 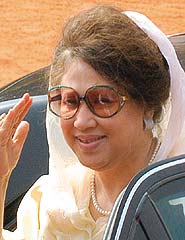 It's a chillingly cynical tale about the rise of Islamic militants overnight in Bangladesh; a tale particularly alarming because their bloody pursuits had the blessings of the previous Bangladesh Nationalist Party (BNP) government. From former prime minister Khaleda Zia to her son Tarique Rahman to state minister for home Lutfozzaman Babar, they all connived to create the phenomenon of Bangla Bhai, who stewarded his outfit, the Jamaatul Mujaheedin Bangladesh (JMB) and left behind a trail of death and destruction. Bangla Bhai was hanged early this year; it perhaps will soon be the turn of his patrons to account for their unconscionable politics.

The BNP government's patronage of Bangla Bhai has been testified to by none other than Bangladesh police chief Nur Mohammad. He told Outlook, "From what I know, former prime minister Khaleda Zia had given her consent to JMB activities. Her son Tarique Rahman had been supporting the vigilante activities of the militants and Lutfozzaman Babar never helped me fight the JMB. Some ministers, MPs and BNP leaders were sponsoring the militants." Nur should know—he was the police chief in 2004 of the Rajshahi Range, which comprises the Rajshahi, Naogaon and Natore districts, precisely where Bangla Bhai operated beginning April 2004. Nur's opposition to militants prompted the Zia government to post him out. 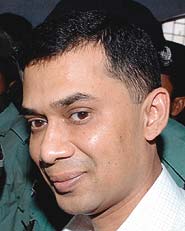 Nur only confirmed to Outlook what this correspondent had stumbled upon while probing the rise of the JMB and other militant outfits. Not only did other officers in Rajshahi testify to the BNP-Bangla Bhai links, they also said the BNP's patronage of militants shattered the chain of command in the police force; that sensing the administration's inaction, several ordinary citizens joined the JMB to save their lives. A local Hindu resident of Rajshahi told Outlook, "One day, I heard someone had lodged a complaint against me with Bangla Bhai. I was so afraid I went to the police. They asked me to see Bangla Bhai. So, I met him."

The BNP leaders also thought that Bangla Bhai's terror tactics would muscle out the principal Opposition party, the Awami League, from the area. Among the first steps Dulu took was to influence the administration into filing a chargesheet against 21 Awami activists for Gama's murder and transfer the case to a special tribunal for speedy trial. This won them the kudos of the Hawa Bhaban, the political office of Khaleda's son, Tarique Rahman.

The Aminul-Dulu alliance soon roped in former MP and Rajshahi mayor, Mizanur Rahman Minu, and Alamgir Kabir, an MP. "At that time, we in the administration came to know that Dulu deployed Bangla Bhai with the Hawa Bhaban's backing," a public servant, refusing to be named, told Outlook. "Mostafa, Kabir and Minu then joined the initiative led by Aminul Haque," He also recalled that government officials were asked to send vehicles to processions Bangla Bhai regularly took out to submit memoranda to authorities. This, even when JMB and Bangla Bhai had been outlawed.

BNP sources say Bangla Bhai used to visit the Hawa Bhaban long before he became a terror in Rajshahi; that Tarique was given updates on Bangla Bhai's operations on the phone by local party leaders; that he directed controversial Rajshahi superintendent of police Masud Mia to assist JMB. A former JMB activist told Outlook that once, in a moment of doubt about his activities, Bangla Bhai told him, "Tarique is with us. Quit worrying and just do what I say."

This remark could be dismissed as a boast by Bangla Bhai, or an attempt by an ex-associate to malign a fallen idol. But the BNP government-JMB nexus is vouched for by police chief Nur: "The local police administration, the SP (Mia) and local politicians helped JMB," he says. "I tried my best to resist them." When Nur informed home minister Lutfozzaman Babar about JMB's activities, he was asked to follow Haque's orders. "I talked to the home minister twice or thrice on this matter, he kept on pushing me towards Aminul Haque. When I talked to him, he said, 'You don't need to pursue this matter. This has come from the highest level. From prime minister to Tarique Rahman, everyone knows about it'," Nur said.

But the wheel now has come full circle. Tarique, Babar and Dulu have been detained on different charges by Dr Fakhruddin Ahmed's military-backed interim regime. Aminul and Mostofa are in hiding. Terror's patrons are on the run.