Of the many local outfits, some like Peace Party may make a dent 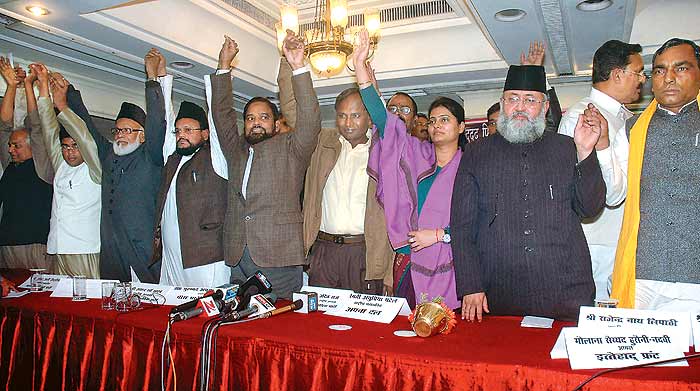 The Small And Big Of It

There are over 190 small parties in Uttar Pradesh registered with the Election Commission. Here are some of them who pose a challenge, even if minor, to the bigger ones:

Too many cooks do spoil the political broth. As it is, in the elections to the Uttar Pradesh assembly, there will be many four-cornered contests between the main political forces; in descending order—the BSP, the SP, the BJP and the Congress. Besides, as many as 150 local parties have registered, up from 112 in the 2007 polls. (There are approximately 1,178 registered parties in the country, according to the EC).

Most of the small parties in UP failed to get even one per cent of the vote in the last assembly polls. These include formations like the Ambedkar Kranti Dal, All India Minorities Front, Moderate Party, Adarsh Lok Dal etc. Many of them push a particular caste or community card. For instance, the Shoshit Samaj Dal talks of a campaign for a Pasmanda revolution—that Muslims are divided into the Ashrafs (upper castes) and the Pasmandas (Dalits and backwards). Their basic contention is that the Ashrafs have long cornered all the benefits and pushed out and humiliated Muslims who belong to communities such as Julaha (weavers), Kunjra (vegetable sellers), Kalal (alcohol distillers) and Dhunia. Their slogan is, “Dalit-pichhda ek samaan/Hindu ho ya Mussalman (Dalit and Backward are one/ Hindu or Muslim).” They intend to field only OBC or Dalit Muslim candidates across the state. It’s an interesting platform but they are not considered serious players.

The new party on the block creating a ripple in political circles is the Peace Party. It actually represents a Muslim-led formation seeking the additional support of other communities on the lines that the BSP does. Muslims, after all, are the biggest group after the Dalits in Uttar Pradesh, close to 19 per cent. The Peace Party is only giving 22 per cent of the 230 seats it is contesting to Muslim candidates. Even among the Muslims, it seems to particularly attract the mbcs. Another significant fact about the Peace Party is that it is not a clerical outfit, like the Ulema Council from pockets like Azamgarh.

What makes the idea behind the Peace Party quite compelling is the personality of its leader, Dr Mohammad Ayub. He is a deeply religious man but not a maulana nor backed by any Jamaat or Jamiat-type quasi-religious group. Dr Ayub is someone who gave up the civil services to practise medicine and has built a 100-bed hospital that treats the poor free in his village Barhalganj on the Gorakhpur/Azamgarh border. His reputation as a surgeon who treats the poor for free has spread across the belt. Apparently, the man has performed an astonishing two lakh operations.

He is clearly a self-made man who now has other points to make. “Good people who want to fight the right battles should enter politics. I can be accused of anything but I have never been corrupted because I believe in my religion. That is why I gave up a posting in the customs service in Bombay. I could not live with the corruption around me. So I started to serve with my skills as a doctor,” he says.

Dr Ayub personally sees the Congress as the big enemies of the Muslims as they have “fooled the community”.

The fundamental appeal of the Peace Party for a section of the minority community lies in the argument that, instead of being included, they are being systematically excluded. Dr Ayub says the “first fraud” took place in 1950 when only Hindus were given reservation as Dalits. “A one-fourth opportunity was excluded for minorities,” he says adding that till now the backward Muslim was struggling to get a slice of the OBC quota. Now they have limited minorities to 4.5 per cent and asked Muslims to compete with far more educated communities like the Sikhs and Christians. “How can they compete? In reality, they are systematically eliminating Muslims from all opportunities and at the same time giving the BJP an issue,” he says.

In the Lucknow flat from where they function, there is a rush of hopefuls for Peace Party tickets. The fan is their symbol. The party is expected to get a section of the votes and in some seats it may not just be the Muslim ones; since a number of candidates are from other communities, they could break some upper-caste and OBC votes too. The Peace Party is primarily expected to be a spoiler for the Congress and the SP. They may win only a few seats but will be in the game and will capture some voteshare.

Dr Ayub personally sees the Congress as the biggest enemy of the Muslims as they have “fooled the community”. “They are more dangerous than the BJP,” he says. So what can the Peace Party achieve? Well, what isn’t helping the Congress is the fact that there is a coherent anti-Congress opinion being put forward by a section of articulate Muslims in the midst of an election when the grand old party is desperately trying to win back the minorities.

The Peace Party has given 40 seats to Raja Bundela’s Bundelkhand Party which can cause upsets.

The Peace Party has struck an alliance with Apna Dal, now led by Anupriya Patel. The party, founded by her father and late Kurmi leader Sone Lal Patel in 1995, had bagged four seats in the 2002 state polls. In 2007, however, the Apna Dal failed to win even a single seat, despite polling some 10 per cent of total votes wherever it contested. But it is seen as having indirectly defeated a few candidates as it did mop up some Kurmi votes. The question is particularly significant for the Congress, which is promoting Beni Prasad Verma as its Kurmi face. Beni is believed to be currently the leader with the easiest access to Rahul Gandhi, who is working hard at campaigning in UP. Now Union steel minister, Beni was once close to Mulayam Singh Yadav and is a veteran from the SP.

The Peace Party-Apna Dal front is certain to irritate the Congress and SP. The Apna Dal has also fielded mafia don and ex-MP Atiq Ahmed from Allahabad-West. The Peace Party-led front has also given 40 seats to the Bundelkhand Party led by TV star-turned-activist Raja Bundela and this could upset some calculations in that belt. In the Bareilly belt, they have an understanding with the Itihad Millat in eight seats.

There are also some old players of UP in the fray who refuse to go gently into the night. Remember Amar Singh, Mulayam’s best-friend-turned-foe? He has floated the Rashtriya Lok Manch party and along with Bollywood star and MP Jaya Prada is touring the state, particularly eastern Uttar Pradesh.

Don Mukhtar Ansari is in jail but is the MLA from Mau who’s formed the Quami Ekta Front. He will be the party’s candidate from Mau while his brother contests from Mohammadabad in Gazipur. In the nation’s largest state, a republic unto itself, it seems dons, doctors, filmstars, mullahs and social activists have all turned politicians.

Two Leaves Can Make A Spring