Stay at home and watch the latest episode of NYPD Blues instead. 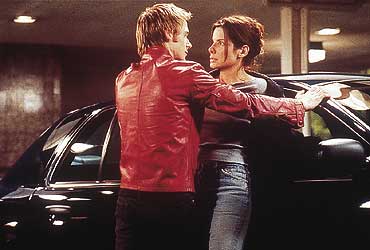 Cassie (Bullock) is "The Hyena", a tough homicide detective—in control, efficient, always taking a lead over her male colleagues in solving intriguing cases. She decides when to seduce her new partner Sam (Chaplin) and when to shove him out of her bed. Even as you start appreciating this sharp and sassy lass "who'd pee standing straight", you're told that there's something not quite right with her. A woman has to have a nightmarish past to make her act like such a man. And eventually she'll need to slip into feminine mode when a nice and caring man comes along. Why, oh why, can't a normal woman ever be the boss? And continue to remain so.

Okay, this might be an irrelevant observation 'coz a thriller after all is just a thriller and not a feminist treatise. But Murder By Numbers fails to thrill as well. Two rich teenagers—charmingly diabolical and manipulative Richard (Gosling) and geeky beauty Justin (Michael Pitt)—form a murder pact. All to prove their superiority to themselves. They kill an unknown young woman and leave enough red herrings behind to make it seem like a spontaneous act of violence. It does lead the police to a wrong suspect but Cassie smells a rat. Throughout the investigation, she also keeps revisiting her past that's given as much play as the crime itself. Why? To make us assume that Cassie makes a better cop because she has been a victim herself. But, actually, what seems to help Cassie is pure good intuition than any ghosts from the past. The police procedure, in turn, helps Cassie free herself from the tormented past. Makes you wonder how. Similarly, the two kids and their spooky proclivities remain a conundrum, without a rationale or context. Gosling and Pitt do make the most attractive evil pair but need a lot of catching up to do with Norman Bates.

The narrative works on an interesting premise. While the audience is privy to the actions of the murderers as well as the investigators, and know the game they are playing with each other, the on-screen players are innocent to these machinations. However, despite such foreknowledge, a good thriller invariably takes the audience by surprise. Murder... lacks that stab of unpredictability. Not once does it grip you by the collar, nor does it take you to the edge of the seat. The climax is the biggest letdown, the crumbling seaside house definitely not as sinister a place for the culprit to fall from as the Statue of Liberty in Hitchcock's Saboteur. Stay home and watch the latest episode of NYPD Blues instead. If you still go for it, please help us solve the other big mystery: why is the film called Murder By Numbers anyways?