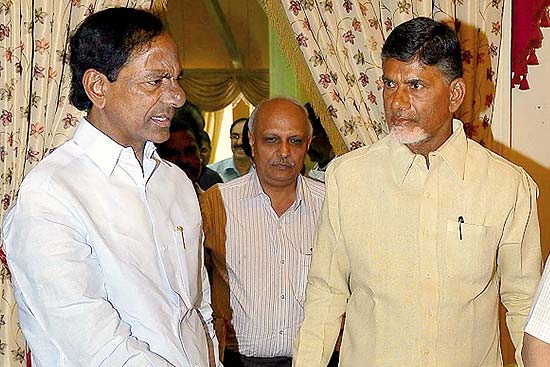 Andhra Pradesh chief minister Chandrababu Naidu has the image of being media-savvy. He does occasionally fumble for words and sentences, but generally, he conveys the impression of being a mature politician. But following the arrest of Revanth Reddy, a Telugu Desam Party (TDP) MLA of Telangana, who was caught on camera by Telangana sleuths while offering a bribe to bring around Telangana Rashtra Samiti (TRS) MLA Elvis Step­henson, and the leak of an audio of Naidu’s “friendly chat” with Stephenson, the Andhra CM is proving a cranky customer.

At a press conference in Delhi after his meeting with the prime minister, Naidu lost his cool when reporters asked him if the voice on the audio was indeed his. “You tell me. Am I the one? (Telangana chief minister) K. Chand­rasekhar Rao ought to answer this question, since his T-News channel aired it. You (TV channels) air the tapes without any basis. Why should have to I explain? You exp­lain,” he fumed, uncharacteristically. Perhaps it’s a touch of worry.

“You are the CM of another state. Hyderabad is no longer your fiefdom. Even Brahma cannot save you in this case.”
K. Chandrasekhar Rao, Telangana chief minister

The wily KCR, meanwhile, waited till Naidu’s press-meet was over. And at his own, in Hyderabad, he made two key statements: first, the Telangana anti­-corruption bureau (ACB) had neither tapped Naidu’s phone nor that of any MLA, as the Andhra government was alleging; second, there was more evide­nce against Naidu, who was neck-deep in trouble. ACB sources say that, on the day he called Stephenson, Naidu called four other MLAs, one of the Congress and three of the TRS. In the Stephenson audio, the voice that is allegedly Naidu’s makes no mention of cash or the legislative council elections: all that’s said is “We’ll honour commitments”. But the legal forces unleashed by the leak seem unstoppable, even though KCR does not stand to gain much politically if Naidu is questioned or arrested.

Naidu is to a degree possessive about Hyderabad—a city he constantly claims to have developed. But KCR’s TRS party has left no stone unturned in making Naidu feel like an unwelcome guest, though the AP Reorganisation Act makes it clear Hyderabad will remain a common capital of Andhra and Telan­gana for 10 years. So much so, Naidu had promised to spend most of his time in Vijayawada and Guntur. KCR and his ministers K.T. Rama Rao and Harish Rao have jibed Naidu about why, then, he lingers in Hyderabad. Naidu, on his part, is seeking implementation of Section 8 of the Reorganisation Act, giving the gov­erno­r law and order powers. But the Modi government at the Centre seems in no rush to do so. Matters stand there. 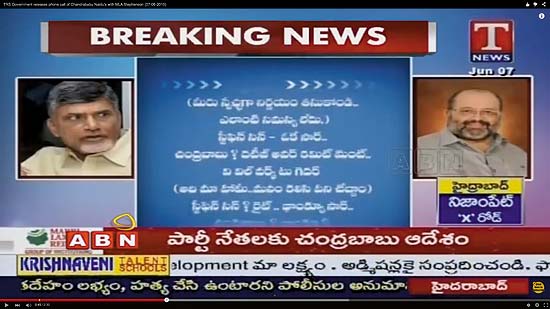 Voiceover KSR’s T-News played it up

“Naidu lives in Hyderabad. The laws here will apply. He’ll go to Sri Krishna Janmasthanam (jail) even if begs the Centre to help.”
K.T. Rama Rao, Telangana IT minister

The TDP, meanwhile, has come out in Naidu’s defence. His ministers allege that YSR Congress chief Jaganmohan Reddy and KCR have conspired to fix Naidu. Labour minister K. Atchannaidu says, “It’s crystal clear that Jagan conspired with KCR. Stephenson is related to Jagan’s brother-in-law Anil Kumar and KCR used him to trap Revanth and defame Naidu.” But Naidu himself has not explicitly said the voice isn’t his.

Over this, TRS leaders are tripping over each other to declare Naidu guilty. “If Naidu is confident the audio is fabricated, why isn’t he asking for a forensic test?” says TRS MP Balka Suman. “The TRS government never tapped anyone’s phone. It was the ACB that guided Stephenson to record his phone calls. Naidu has only himself to blame for get­ting caught red-handed.” And Telan­gana’s finance minister Eetala Rajender says, “The ACB has enough documentary evidence to serve notice against Naidu. Even a child can recognise Naidu’s voice—he’s been speaking in that boring monotone for three decades.”

“I am the CM of Andhra Pradesh, not a servant of KCR in Telangana. If I am arrested, your government will fall.”
N. Chandrababu Naidu, AP chief minister

Meanwhile, there are rumblings in the TDP. Sources say a media baron is trying to work out a compromise between KCR and Naidu: the baron is learnt to have enraged Naidu by suggesting that either AP assembly Speaker Kodela Siva­prasada Rao or Rayapati Sambasiva Rao (an MP) be made interim CM till the clouds clear. Speculation is also rife that Naidu’s brother-in-law Nandamuri Balakrishna is also leveraging for chief ministership, interim or otherwise, should Naidu be forced to resign.

Also troubling Naidu is Modi’s muted response to the situation. The TDP is a coalition partner in the NDA government at the Centre, but Modi may not be willing to stick his neck out for Naidu if he is charged for conspiracy and corruption. Besides, Modi might bear in mind that Naidu had pulled out of Vajpayee’s NDA government after the Godhra riots and said that he’d never let Modi enter Hyderabad. Vajpayee might have needed the TDP’s support; the Modi government doesn’t. 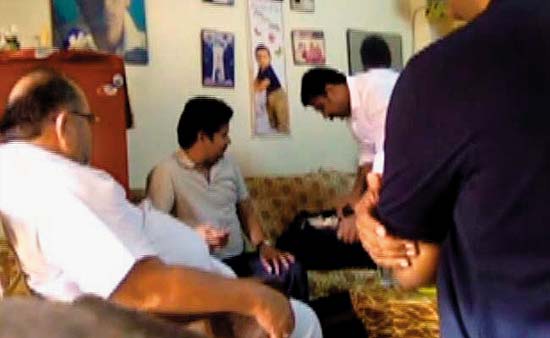 “Did your MLA offer money to buy another MLA’s vote? If he acted on his own, why have you not taken action against him?”
Jayaprakash Narayan, Lok Satta leader

Vasireddy Padma, a YSR Congress leader, says, “Modi won’t humour Naidu as Vajpayee used to.” Her party chief Jaganmohan has been at pains to get Naidu charged in this cash-for-vote case, knocking at the doors of the governor, the prime minister and the president, who he says gave them “a patient hearing as we explained Naidu’s role”.

But Naidu is not one to give up easily, and is deploying many diplomatic and political manoeuvres. What has come as some relief is that the Andhra police chief, J.V. Ramudu, has submitted what he says is evidence that the phones of 125 TDP MLAs, ministers, their relatives, and officials had been tapped, and based on this, the Centre is reported to have ord­ered an inquiry. Naidu and his party are also trying to portray the affair as an Andhra-Telangana issue. Who ever said the region was short on volatility?

For The Sake Of Indipiti