Corruption rules his government more than Yediyurappa his state 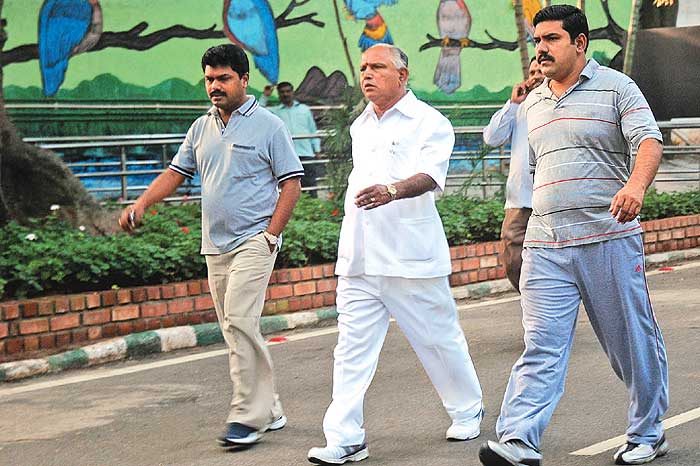 Forget the head count in the Karnataka assembly for a moment. Perhaps it is more pertinent to ask if the B.S. Yediyurappa government has violated the trust of the people. Has the first BJP government in the south, which has been in power for less than 30 months, shot itself in the foot? Have the many scams it’s embroiled in eroded its credibility? Has it become indifferent to corruption and governance? Is it fair to ask if it’s the worst administration Karnataka’s ever seen?

If one goes by the statements of Karnataka Lokayukta Justice N. Santosh Hegde, who has thoroughly exposed the government on issues pertaining to illegal mining and most recently on land acquisition, then this is clearly the absolute nadir (see interview). In Karnataka, corruption starts right at the top. Here are some of the scams that made news:

The Bangalore Development Authority (BDA) Scam: This involves the chief minister. He is accused of denotifying government land to favour his sons and son-in-law. The final notification for the land acquired by the BDA in Rachenahalli village of Krishnarajapuram to form Arkavathy Layout was issued in 2004. But the CM’s family is alleged to have purchased land already in BDA’s possession and got it denotified in clear violation of all rules. Once the land is purchased, it can be sold back to the BDA. After this case came to light, more papers relating to the irregular denotification surfaced this month. In yet another case, Yediyurappa was accused of denotifying BDA land in Nagarbhavi, Bangalore, ignoring both high court and Supreme Court rulings which said no to such denotification.

Topping this all, however, was the CM allotting a discretionary quota BDA site to his MP-son, B.Y. Raghavendra, in 2009. Contrary to reality, Raghavendra had submitted an affidavit stating he didn’t own any property in Bangalore to get land in the city’s upmarket rmv 2nd stage locality. Other than his son, Yediyurappa had allotted these ‘G category’ sites to some of his friends and relatives. Confronted by all the charges flying around, the CM’s only reaction was that he hasn’t done anything his predecessors haven’t done already. Though no figure’s been attached to the scam, it’ll easily run into hundreds of crores.

The Karnataka Industrial Areas Development Board (KIADB) Land Swindle: The Lokayukta’s exposure of the massive scam in the land acquisition process of the Karnataka Industrial Areas Development Board in October was easily the tipping point for this government. In this case, the powerful IT minister Katta Subramanya Naidu and his entire family came under the scanner while his son Katta Jagadish, a BJP corporator, was also arrested when he tried to bribe a complainant.

Confronted by the various charges, the CM’s response: he hasn’t done anything his predecessors haven’t.

The scam dates to the time when Katta Naidu was the industries minister in the JD(S)-BJP coalition government. Land was acquired for an SEZ floated by Itasca Software and another US-based company near Bangalore’s new international airport. Of the 300 acres acquired, nearly 13 acres were alleged to have have been bought cheap by Katta Naidu’s family earlier with the prior knowledge of the coming acquisition. A compensation of Rs 41 lakh per acre was given for land close to the main road, while Rs 31 lakh per acre was paid for land a little away. Later, a farmer petitioned the KIADB stating that part of the land actually belonged to him. When the KIADB found his claim to be true, they gave him compensation too. The Lokayukta is now probing if Katta’s family has links with Itasca Software. However, Katta Naidu has maintained he has done no wrong and won’t resign. Meanwhile, after the scam broke, many such dubious KIADB land acquisition cases have started coming to light from different parts of the state.

As a senior police officer investigating the KIADB scam put it, there are four aspects to it: “prior knowledge” of acquisition and hence cornering as much land as possible in the area; “misleading farmers” to part with their land for small change, in anticipation of a big bounty later; “creating false documents” to show ownership of land you never possessed; and “creating a formal syndicate” that both corners a significant portion of land and also determines its acquisition and how it’ll be compensated. “Here you’re both beneficiary and dispenser of benefits.”

The Land Bank Controversy: Land has been the Achilles heel of the BJP government. As a build-up to the Global Investors Meet in June 2010, the government decided to build a ‘land bank’ of one lakh acres. By the time the meet was held, a primary or final notification had been issued for nearly 49,136 acres. In districts like Ramanagaram, just outside Bangalore, nearly 12,205 acres had been identified, 10,842 acres had been identified in Belgaum, at the northern end of the state, while another 9,347 acres was identified in Dharwad.

Earlier, KIADB acquired land only on request, and after the government signed on a project. At best, it would have a couple of thousand acres in different parts of the state. But everything was reversed. Even before a single paisa of industrial projects came in, thousands of acres were acquired to be developed. As a top bureaucrat says, instead of being a facilitating agency, the government began functioning as a “real estate developer”. Of course, large-scale land purchases done with “insider knowledge” allegedly preceded this. 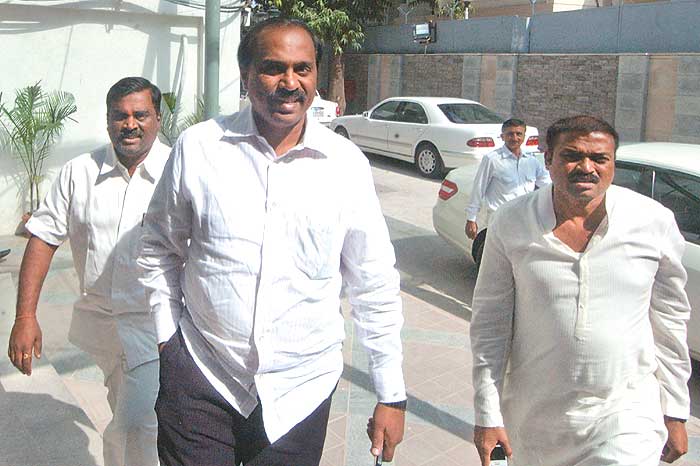 Reddy Bros Of Bellary: Allies or thorns in the flesh? (Photograph by Sanjay Rawat)

Earlier, KIADB acquired land only on request. Now, land is acquired before money comes in for the project.

The Illegal Mining Scam: The presence of the Reddy brothers of Bellary in the government has ensured continued focus on the subject of illegal mining. In fact, money from illegal mining is alleged to have contributed hugely to the electoral success of the BJP. The Yediyurappa government, for the most part, turned a blind eye to the scourge which runs into thousands of crores every year. It was forced to take note only after the Lokayukta resigned following the mysterious disappearance of iron ore from the Belekere port in Karwar and later, when the Congress led a padayatra to Bellary in July-August 2010 to highlight the brazen attitude of the Reddy brothers. Finally on July 26, the government banned the export of iron ore from the 10 ports of the state. It also stopped issuing transport permits for ore exports. But very little changed on the ground really. “Yediyurappa has had an on-off relationship with the Reddys. We only know that they tormented him, but we don’t speak about how much he benefited from them,” a mining rival of the Reddys says. “Finally, Yediyurappa has to be held responsible for illegal mining because he has held the mining portfolio all along.” Recently, Yediyurappa naively admitted in the assembly that 34 lakh metric tonnes of iron ore had been illegally exported from the state in just five months of his tenure. 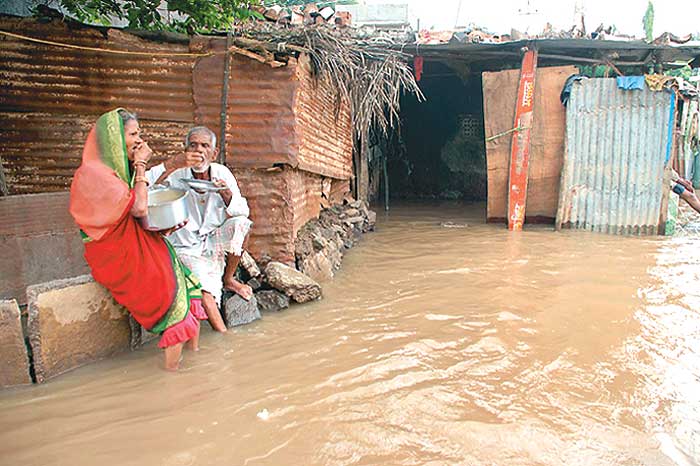 All Sunk: Where’s the money meant for their rehabilitation? (Photograph by KPN)

Rehabilitation of Flood Victims: Yediyurappa did a roadshow in October 2009 to collect crores to rehabilitate flood victims in north Karnataka. The money poured in, but nothing moved on the ground, and the funds remained unaccounted for. The ambitious move of the government to relocate 220 villages in low-lying areas to elevated terrain also fell flat. It had initiated a ‘unique public-private partnership model’ wherein the government would transfer land to corporate partners and they in turn would build houses at a cost of Rs 1 lakh each. But by the time the 2010 monsoon arrived, not a single house was ready. Here again, there are allegations of corruption in contracts and tenders.

“We know the Reddys tormented him,” says their rival, “but we don’t speak of how much he benefited.”

Besides land and mining, the Yediyurappa government has been caught on the wrong foot on other issues too. Medical education minister Ramachandra Gowda had to quit recently after irregularities were exposed—with the HC making tough observations on it—in the recruitment of support staff for two state-run medical colleges. Earlier, housing minister S.N. Krishnaiah Shetty was forced to exit the cabinet after a land scam was exposed.

While most people avoided coming on record on the BJP’s near-degenerate performance, entrepreneur R.K. Misra, who founded the ‘Friends of the BJP’ forum, was candid: “Across India, we expect BJP-run governments to set benchmarks of development and good governance. The Karnataka BJP government needs to rate its performance against other BJP-run states like Gujarat, MP, Chhattisgarh or Bihar. If the state leadership is honest and focused on good governance, rebels will have no public support. No wonder there’s no rebellion against Modi or Raman Singh.” He also says he’s disappointed after he joined the BJP with such high expectations in 2008. The disillusionment indeed runs deep.