MS Written By The Lord

A narrative of the sublime relationship the immortal M.S. and Radha Viswanathan shared enamours and educates 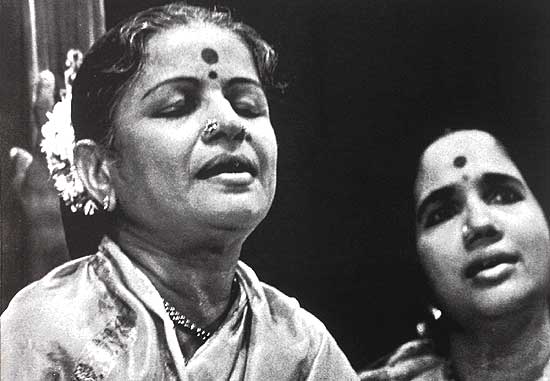 Their golden voices still hypnotise the music world. They were often described as two tanpuras strumming together in unison. But no one can speak of the legendary Carnatic vocalist Madurai Shanmukhavadivu Subbulakshmi (universally known as MS) and her husband T. Sadasivam’s elder daughter by his first marriage, Radha, without going into raptures about their sheer goodness.

Radha Viswanathan, now a cheerful 75, was barely two when MS entered her life as her “new mother”. She attached herself to MS, who became over the years her mother, teacher, sakhi and nurse. For the next decades, Radha also shared with MS some of the most coveted and prestigious musical platforms nationally and internationally.

And there is probably no one as qualified as Gowri Ramnarayan to write about the loving relationship in life as well as on stage between MS and Radha. Gowri is part of that family, grew up in their vicinity, learnt music, accompanied MS at concerts when Radha could not.

The book, highly necessary and readable as it is, does not do justice to Gowri’s own considerable knowledge of Carnatic music and the ringside view she had into the lives of the main protagonists—years of personal access as well as professional interviews. She also has access to the sumptuous collection of photographs and other material in various compilations. But with such riches, one would have expected a better strung-together set of chapters, rather than these extended versions of past articles. However, the book’s uneven structure is overridden by what it contains.

There are detailed and delightful descriptions of MS’s and Radha’s musical development and the range of their stupendous repertoire. There is also an excellent segment discussing the emergence of female musicians in the Carnatic fold in the early decades of the twentieth century and their consolidation in the 1940s. During this period, there is also a detailed picture of MS’s contribution to the popularity of ‘Tamil isai’ (songs) in Carnatic concerts, going against the preference for Telugu and Sanskrit at the all-powerful Music Academy.

We get an astute evaluation of Sadasivam’s contribution, catapulting MS to the national canvas as a multi-lingual “Queen of Song” (as Pandit Nehru described her), steeped in bhakti, and able to induce both tranquility and devotion in her listeners. He played no insignificant part in casting the reticent, small-town girl with a golden throat into a quintessential nation-builder, to whom both patricians and plebians paid obeisance.

There is also a happy cameo of the ‘pitamaha’ of Carnatic music, Semmangudi Srinivasa Iyer, the musician who polished and perfected MS’s baani. Known as much for his music as for his wit, the author quotes Semmangudi’s cheeky claim that Sadasivam was his sishya before MS, as he had taught him seettu (cards) before he taught her paattu (music).

The spine of the book remains the unusual bond between Radha and MS, eighteen years her senior. Those who privilege the glory of ‘blood relations’ can take a lesson from the elevating narrative of mutual love and respect between the two. In the process, the book reveals aspects of Radha, probably unknown before, as she remained MS’s pin paattu (second singer) on stage as in life.

The author takes us through Radha’s early training in music, her highly acclaimed debut as the young Meera in the film of that name which made MS an icon, her brief branching out as a Bharatanatyam performer and her eventual return with the tanpura to her assured place beside MS. The narrative is peppered with anecdotes of Radha’s little asides to MS, often eliciting the mock chide, ‘Pokkiri’ (naughty girl) from the senior.

But the book retains the weaknesses of an ‘authorised’ biography and steers clear of grey zones. Large, historical questions linked to issues of caste identity, national culture, revivalism, etc. are left alone. The author seems overawed at her own agency and keeps referring to herself as ‘grand-niece’. It does produce moments of gush. At one point, MS is quoted as exclaiming, ‘Atiye koodathu,’ (avoid excesses) as the guiding principle in her music. Even if the author does periodically forget this dictum here, this book is bound to swiftly find its way to the collectors’ shelves.