(Mrs) Gang Of One

The party president is forced into being the solo campaigner 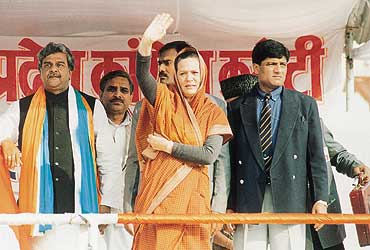 outlookindia.com
-0001-11-30T00:00:00+0553
The problem for the Congress this time is not so much the message but the messenger. On the eve of the crucial assembly elections to Uttar Pradesh, Punjab, Uttaranchal and Manipur, the party has realised it has no leaders of national stature, save Sonia Gandhi, who can campaign for it. And so the Congress president has a gruelling three weeks ahead of her as she criss-crosses the four states, addressing election meetings. Although her schedule is yet to be finalised, the proposed draft includes 20 meetings in UP, 11 in Uttaranchal, eight in Punjab and three in Manipur. However, as the requests come pouring in from candidates, Sonia may have to add further meetings to her already cramped itinerary.

The Congress is so short on campaigners that it is roping in its chief ministers. According to party spokesperson Anand Sharma, Hindi-speaking CMs will concentrate on UP while leaders like Manmohan Singh and P. Shiv Shankar will campaign in Punjab. But, as a former PCC chief argues, "Unfortunately, not too many in UP recognise Sheila Dixit, Vilasrao Deshmukh and Ashok Gehlot. Even Digvijay Singh has a limited appeal."

The pressure on Sonia to provide both the charisma and the content is so much that she is expected to address as many as five meetings a day. This is a reason why partymen feel Priyanka must help out. But 10, Janpath sources rule out an extensive campaign by the daughter. They say that if at all she campaigns, she'll restrict herself to the Amethi-Rae Bareli-Sultanpur belt. Says the source: "Even Priyanka can't deliver UP for the Congress. The party is not even slated to win all the eight assembly segments in Amethi. Given this, it makes sense for Priyanka to wait for the general elections." This makes sound electoral sense but does little to ease her mother's campaigning burden.

Fortunately for the Congress, Sonia is still a crowd-puller. Congressmen claim attendance at her rallies equals those of the PM's. Says a party general secretary, "So what if the BJP has L.K. Advani and the PM? Soniaji is equal to both. She is also younger and healthier!" More importantly, Congressmen point to the distinct change in the tone and tenor of Sonia's campaigning. She no longer fumbles over unfamiliar Hindi words but peppers her speech with filmi dialogues. At her Kanpur rally last fortnight, she drew a parallel from the Ramayan and accused the BJP of behaving like Ravana. Speaking in Hindi, she thundered: "I cannot ask you to burn their Lanka just like Hanumanji had done by setting fire to his tail but I can ask you to defeat the perpetrators of evil."

No one admits this on the record, but most partymen agree that this time the party is so heavily dependent on Sonia since it lost three charismatic leaders last year. Says a UP Congressman: "Rajesh Pilot, Madhavrao Scindia and Jitendra Prasada were all recognisable names in the north. We could have cashed in on their brand equity now. In their place we now have to make do with (Ghulam Nabi) Azad and N.D. Tiwari." This is in sharp contrast with the BJP's A.B. Vajpayee, Advani, Sushma Swaraj, Pramod Mahajan, Murli Manohar Joshi and the state leadership. And, of course, the Samajwadi Party has Amitabh and Jaya Bachchan to call upon.

In fact, if the loss of three senior leaders was not enough, Sonia may not have any help from friends in Bollywood this time. Earlier, the party could count on the likes of Rajesh Khanna and Dilip Kumar. This year, though, both have opted out. Khanna because he is sulking over having been denied a Rajya Sabha ticket and Kumar due to ill health. Which leaves only Sunil Dutt, who will be concentrating on Punjab.

With the stars still doubtful, Sonia is the Congress' campaigner-in-chief. If the party does well, particularly in Uttar Pradesh, the credit will be all hers.But should there be a downslide, then she will have to shoulder the blame. In no other election campaign has Sonia been under so much pressure and with so few options.