He couldn't tell a king of hearts in a pack of cards, but built an empire from dust 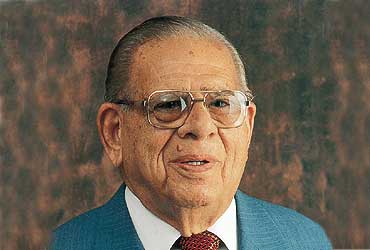 outlookindia.com
-0001-11-30T00:00:00+0553
An outfitter on Saville Row, London's world-famous street of sartorial suave, could possibly write best about the astounding rags-to-Irish-linen-suits story of Mohan Singh Oberoi, India's legendary icon of hotels and hospitality, says son and successor P.R.S. 'Bikki' Oberoi. For, when the outfitter asked the man who started life with empty pockets, "Which side do you prefer carrying your change?" Mohan Singh replied honestly, "There's no need for a change pocket. I don't need to carry money on my person anymore."

Mohan Singh Oberoi had reversed fate in his life. He began his career overseeing the coal heating at Shimla's Hotel Clarke for all of Rs 10 a month and then went on to buy the same property for Rs 20,000 within 22 years. Now he reverses destiny with his death. Bikki Oberoi, heir to a legacy of 35 luxury hotels worldwide, is busy with the details of a blueprint. But these drawings aren't for a new hotel consolidating the family business empire. Instead, he is building a private monument in the name of his father, which will stand alone and unbranded by the family name, Oberoi, a 68-year-old Indian logo established and recognised across seven countries.

In an emotive interview with Outlook, Bikki Oberoi, vice-chairman and managing director, EIH Ltd (formerly East India Hotels which runs the Oberoi chain), said, "On this land that belonged to my grandmother, on the same farm where he loved to walk amidst roses and flowers, I want to build chhattris for my father as well as my lost mother and brother, uniting them in eternal peace." Bringing to reality the last of many of M.S. Oberoi's dreams.

Journalist Bachi Karkaria, the official biographer of M.S. Oberoi (Dare to Dream, Viking, Penguin), recalls an eerie experience in the course of her interviews with the then 91-year-old hotelier at his Kapashera farm, on the outskirts of Delhi. He said, "I want you to see something." Too old to walk far by himself, a retainer escorted Karkaria out onto the farm grounds where, "in the middle of manicured lawns as birds chirped, was a cremation ground created from sandstone". "I don't want to die a death of indignity at the Nigambodh Ghat of Delhi," he said. And here he will rest shaded under the cover of chhattris while the sun continues to shine over his empire, created with nothing but sheer dint and dust.

It was a long journey from his birthplace of Chakwal, now in Pakistan. By the time Oberoi migrated this side after the Partition, he was already a Rai Bahadur (a title conferred by the British for his good job of housing troops during World War II). He built his reputation in India without always knowing about that of others. One winter, a stranger checking in at the Clarke asked Mohan Singh to type up a 100-page manuscript by 5 the next morning. It was done before time and without any mistakes, and it got Mohan Singh a hefty Rs 100 tip—almost twice his salary. While he promptly bought new blankets and clothes for his family from the money, what Mohan Singh didn't realise was that the tip-giver was none other than Motilal Nehru.

Inder Sharma, colleague, contemporary and later competitor of Rai Bahadur, and former chairman of SITA Travels, remembers meeting Oberoi in 1955. "I approached Rai Bahadur and asked if SITA could have an office in The Imperial (which Oberoi used to operate on lease), fully expecting that he would refuse me as a direct rival to the Oberoi-owned travel agency, Mercury. To my surprise, he not only gave us space but also a prime location! Later, when I asked him about this, he said it was a hundred per cent pure business decision since SITA has offices in the most prestigious international hotels.Though he went on to be the first Indian to build a hotel abroad, Mohan Singh held The Oberoi Grand in Calcutta closest to his heart, that grand old dame he polished into a new bride, keeping the old Raj chhaap while niftily adding modern facilities to the traditional edifice.We would often meet over coffee where he would pass around chicken patties—with great pride in his cook's ability of producing fabulously light and flaky pastry."

Patties that continued to be served every day of his life at the strike of 4 every evening, including every weekend when Karkaria arrived from Bombay in 1990. A tea-time snack that she had come to expect and refuse. "You don't like patties?" he asked her. "No, I really don't," said Karkaria. But with his uncanny ability to hone into what was close to someone's heart, Rai Bahadur sent back the tray and asked his biographer for a walk in the garden. And it was in his garden of exotic desert blooms that Karkaria asked for a bougainvillea cutting for her own terrace garden back home. And when Karkaria returned with her Oberoi bougainvillea, she found a mini-truck filled with tropical plants, meticulously selected and dispatched by the grand old man, waiting for her right in front of her house.

He lived a full life, says Bikki, "with a love of romance, food, gardens and horses. Going to the races was something he loved but he never gambled, all his bets, even those at the Derby, were fictitious. Totally unworldly, even from the characters in a pack of cards, he couldn't tell a king of hearts from a king of spades". Yet, in his 104-year-long life his greatest gambles, right from buying the Clarke, have paid off richly for his family and his investors.

Breaking just one of his high standards on his death, 35 Oberoi hotels worldwide, even those belonging to the "Leading Hotels of The World", silenced all piped orchestral music. While all the other Oberoi signature services—superfast check-ins, rose petals on the bedcovers and orange juice freshly squeezed—weren't forgotten but bettered. After four days of silence, on hearing the saxophones playing again melliflously, the grand old man must be smiling in the skies.

Key Questions Before The Supreme Court