Rahul's debut is a canny bid to offer an alternate point of focus from the polarising persona of Sonia Gandhi . Updates. 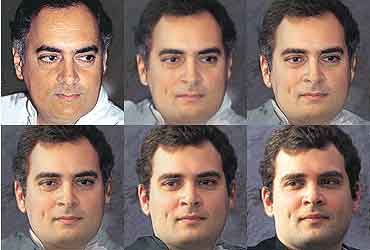 outlookindia.com
-0001-11-30T00:00:00+0553
They make a pretty picture: the cherubic Rahul Gandhi leading his brigade of Ivy League-educated, MNC-trained youngsters into the heat and dust of the desi electoral battle. The babalog are back, in all their kurta-pyjama and sneaker-clad chic. But can they save the party? The Congress is in urgent need of a knight errant to rescue it from electoral embarrassment, fumbling as it is for a cogent agenda and a compelling slogan in contrast to the BJP's jackrabbit start. Poster-boy Rahul, it hopes, will brighten its campaign and give it an added edge.

However, no Congressman is willing to claim Rahul's electoral debut will miraculously turn the party's fortunes around; a tacit acknowledgement that they have come to terms with the grim realities of Lok Sabha 2004. They all know he'll garner a disproportionate share of sound bites and pixels, but does he carry even a residual magnetism associated with the surname to wean away a young electorate from the BJP? Beyond Amethi, partymen are non-committal.

Congress strategist Salman Khursheed quantifies Rahul's immediate impact on the party's prospects in two ways. One is obvious, that he will impart a more youthful sheen to the Congress in stark contrast to the hoary BJP (and goes without saying, the Congress old guard). The second is not that obvious: that he will galvanise the party rank and file. But, exults Youth Congress president Randeep Singh Surjewala: "This is Asia. Ideology by itself isn't enough. You must have a personification of that ideology. Rahul Congress ki vichardhaara ka jeeta-jagta prateek hai (Rahul is the personification of the Congress ideology)." The subtext is that he will dilute the foreign origin factor (which, of course, the Congress officially denies ever existed) at a time when the BJP's concerted campaign on it is finding a degree of acceptance in a civil society riven along sectoral and lobby lines.

The party's move to field Rahul by playing up the youth theme is also a subtle and canny attempt—by offering an alternative point of focus from the deeply polarising face of Sonia—to reclaim the universality of its appeal that it had lost ever since the post-Emergency collapse of the Congress consensus. The old empire, in short, dressed up in new concerns—that of the Indian youth. How much of it will work is, however, another question.

Younger Congressmen are chuffed that at least one of the two siblings is contesting. They never tire of pointing out that 54 per cent of the electorate is below 25 years of age and better able to identify with a Rahul Gandhi than an Advani. Sandeep Dikshit, the Congress probable from East Delhi, says, "Rahul's arrival is a symbol of the greening of the Congress. The torch is being passed to the next generation and the concerns of youth are upfront."

However, the general feeling is that Rahul's debut has come too late in the day to be effective this time—too late, that is, to wring out a credible political persona from the shrinking violet princeling. R.P. Singh, Congress candidate from Bulandshahr and a school buddy of Priyanka and Rahul, is one of those who says the decision should have come earlier. Adds he: "Priyanka should also make up her mind one way or the other." But he does concede that Rahul's advent will make it easier for every candidate in UP to win his seat.

AICC secretary R.P.N. Singh, a Congress hopeful from Padrauna in eastern UP, says he expects Rahul's candidature from Amethi to give the party that extra fillip in the state. Even before news of his impending baptism, internal surveys conducted by the Congress saw its voteshare crawl up from a low of 8 per cent in the assembly elections to 15 per cent in February this year. A follow-up survey earlier this month put it in the region of 18 per cent, not enough to win seats on its own but in a position to make its presence felt.Says R.P.N. Singh: "We're in the fight in as many 25 of the 80 seats in UP." 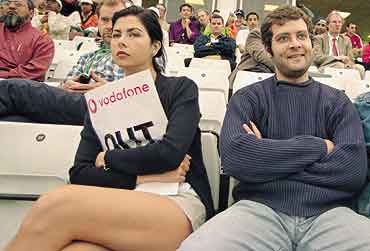 Off the record, Congressmen say Rahul may not have it in him to make a decisive impact in UP's fractured polity. "It just means we've one more sure seat in our kitty," quipped a party hand. "There may be a ripple effect but it isn't going to be significant beyond Sultanpur (the seat neighbouring Rae Bareli and Amethi)." Too little, too late just about sums up the party's take on Rahul's advent.

A snap poll conducted by C-Voter for Star TV in 20 Lok Sabha constituencies of UP, immediately following the announcement of Rahul's candidature, found that most voters believed his joining would benefit the party in the long run. He was perceived as young and energetic but inexperienced. Not surprisingly, most preferred Priyanka to Rahul.

Priyanka's adherents are legion. One of them even has a monthly magazine called World of Priyanka! For several months now, it had been clear that she was the one who would campaign, wooing voters as her elder brother is blooded in electoral politics. The compulsions of motherhood, the press was told, were stronger than the convictions of politics. The only surprise was that Rahul is contesting from Amethi, not Rae Bareli. "It means the Congress president has chosen the tougher seat," says Khursheed. But most see it as a sign that Sonia has made up her mind about the succession: Rahul is her first choice and only if he fails will Priyanka step in.

When he visited Amethi with Priyanka last month, she introduced him to assembled party workers thus: "He'll look after you now." In hindsight, it was a clear signal. Or was it? After all, it's Priyanka who has nurtured the constituency. Rahul could just as well have stood from Rae Bareli. Despite rumours about differences between Sonia and Priyanka on Rahul contesting the polls, there's nothing to prove this. The siblings are very close.

The bj's reaction to Rahul's candidature was predictable: dynasty had no place in a democracy even as it handed out tickets to Rajasthan CM Vasundhararaje's son Dushyant and Union finance minister Jaswant Singh's son Manvendra.

If Sonia's reliance on family has increased, it's clearly because her generals appear to be letting her down. Internecine warfare in the Congress has assumed violent proportions: last week, the police had to be called in to restrain party workers upset over ticket distribution in Tamil Nadu. They shouted slogans against cwc members Ahmed Patel and Kamal Nath. In fact, the entire pcc leadership walked out of the meeting chaired by Patel as they were miffed at having their suggestions ignored by him. The next day, infuriated by ticket distribution, the Andhra Pradesh cadre trashed cwc member Ghulam Nabi Azad's house.

The ongoing battle between the cwc's three minority leaders—Azad, Patel and Khursheed—is no secret. Patel and Khursheed have reportedly locked horns over the question of alliances in UP, with the former wooing the SP, the latter the bsp—both unsuccessfully! Will Rahul's entry put an end to the bickerings? Perhaps. Since he's a patient listener he might be able to pacify warring Congressmen better than his sister. That's a start.