Moving Pictures Of A Rebellion

Artistic dissent has a 'Vikalp' to the Mumbai film fest 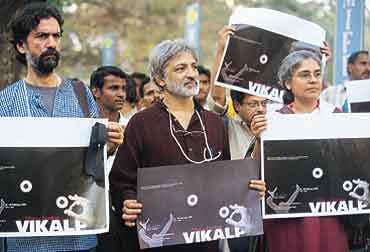 outlookindia.com
-0001-11-30T00:00:00+0553
P.L. Deshpande Hall and Bhupesh Gupta Bhavan are virtually across the road from each other in Prabhadevi, central Mumbai. Yet, the announcement of the films that would be shown at the Mumbai International Film Festival (MIFF) of documentary and short films seemed to stretch the distance between them alarmingly, from a 100-metre stroll to the light years that separate opposing ideologies.

A raft of prominent documentary filmmakers claimed last week that the organisers of MIFF—scheduled over February 4-9—were using a hugely flawed selection process to carry out 'backdoor censorship'. Several, like Sanjay Kak and Rakesh Sharma, had their work rejected. Others, like Biju Toppo and Meghnath, found themselves in sync with the underlying allegation that the MIFF organisers were cherry-picking films to exclude any that criticised the government on globalisation and the new economic policy, and withdrew their already accepted entries.

In all, close to 60 dissident filmmakers took their films across the road to Bhupesh Gupta Bhavan, where they set up the Vikalp (alternative) festival, to run concurrently with MIFF.

Meanwhile, veteran playwright-filmmaker Girish Karnad rescued himself from the final jury, of which he was a member. He justified his pullout thus: "It's difficult to be part of MIFF as the festival's very purpose has become vitiated." This was a particularly nasty blow to MIFF's image, since criticism from Karnad, who is known for his moderate views, hurt more than it might have had it come from an easily roused firebrand.

Since its inception in '90, MIFF has earned a reputation for being a fair forum that welcomed young talent without censorship. That good name has taken a hammering this year, with charges of bias and unethical practice clogging the air.

Indian filmmakers first realised something was awry when MIFF asked local participants to get censor certificates for their films. This was something that had never been done before and 275 outraged filmmakers quickly formed the Campaign against Censorship (CAC). "This (censorship) is unheard of in any international festival and defeats the very purpose," says Rakesh Sharma, filmmaker and CAC spokesman. MIFF hastily withdrew, but this turned out to be a short-lived exercise in damage control.

For, its 12-member selection panel rejected several films that had received considerable international recognition and acclaim. "The best 20 or 30 films made over the past two years in India have been rejected," says CAC's Sharma.

Its critics say MIFF's selection process is flawed, opaque and politically subservient. Earlier, all panelists watched every film. This year only a quorum of three was required. The arbitrarily chosen panelists for each film would then feed their scores into a computer and the statistical average formed the basis for selection. A Films Division officer put together the final list. "It's unheard of that a selection panel is not headed by a director and that the panel finalises a list without a discussion over every film," explains Sharma. "It did not even meet once to arrive at a common scale of grading."

And it certainly didn't help the MIFF's case when filmmaker R.V. Ramani resigned from its organising committee. In his resignation letter, he wrote: "After going through the records in your office, I am convinced the selection process was flawed. The selection committee had no empowerment, they never knew of the final selection; the then director had interfered with the selection process and has even manipulated the results. This is making a mockery of the clauses that 'the decision of the selection committee is final' and that 'there is no censorship clause for the films/videos entered'."

And though there was ostensibly no political pressure, films that speak about the uncomfortable moments for political heads—Gujarat riots, caste and gender discrimination, sexuality, and the politics of development—have failed to make the cut.

Unsurprisingly, filmmakers have found this hard to swallow and want a more open selection process. Shanta Gokhale, film and theatre critic, says: "No selection committee anywhere on earth is infallible and no member can entirely rid himself of his biases. This is precisely why we need a more transparent process so that even those who are rejected would be convinced in good faith."

Sharma, who has been on selection committees in the past, explains that a committee needs to comprise people with an established film background and those with curating experience. And typically, a core team of experienced people watches all the films. Such a committee, headed by a director, should provide a more balanced judgement, since individual biases can skew results.

Officials at MIFF wouldn't speak to Outlook on record, but privately, insiders argued in their defence that:

Sharma and his colleagues say this is nonsense because many of them were not contacted—such anomalies goaded even filmmakers whose films were selected to withdraw from MIFF in their support.

In fact, CAC wants a probe into MIFF 2004 by an independent review committee comprising eminent filmmakers and experienced curators, to ensure greater transparency during such festivals in the future.

As for Vikalp, Sharma hopes it'll eventually grow into a travelling festival. But even if it remains a one-off thing, it has already become the most recent addition to a long tradition of artistic dissent. The first well-documented case was in 1863, when a group of rejected French artists, who felt their selection panel was partial and unresponsive to new ideas, set up Salons de Refuses (Salons of the Rejected).

It was quite appropriate, therefore, that the opening item at Vikalp was a 25-minute monologue from Kali Shalwar, Safed Jhoot, a dramatised adaptation of a Saadat Hasan Manto story. The play is a direct defence of the freedom of expression by Manto some 50 years ago, against allegations of obscenity aimed at him for his choice of subject and language. As a French journalist grumbled more than a century ago: "Plus ca change, plus c'est la meme chose (The more things change, the more they remain the same)."