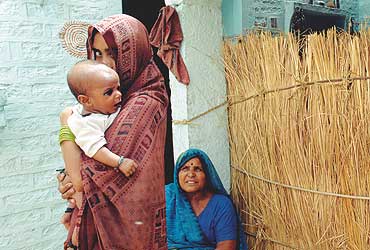 outlookindia.com
-0001-11-30T00:00:00+0553
Seventeen-year-old Chhaya is one of the few lucky mothers here to have survived childbirth. Her family thinks it's nothing short of divine grace that she managed to deliver a baby boy early last month. Bleeding profusely, she was brought to the Dholpur district hospital on a tractor, a bone-breaking ride that took over two hours to cover the 45 km from Tontri village. The doctor in charge directed the heavily-haemorrhaging Chhaya to a private clinic where, after shelling out Rs 500, she had her baby. Today, Chhaya is barely able to take care of the infant, but the family is happy to see mother and child alive. "I thought I'd die," says Chhaya.

Others like her are usually dead by the time they make it to the nearest hospital. Dholpur district in Rajasthan, which also happens to be Chief Minister Vasundhararaje's husband's hometown, has the dubious distinction of recording the highest number of maternity deaths in the state. The maternal mortality ratio (MMR) here is as high as 670 deaths per one lakh births. Pregnant women are often taken on tractors or fruit carts even as they are in labour, and most of them die before they can be attended to. Bound by custom and tradition, the women are ill-informed about personal health, and in a strong patriarchal set-up, their plaintive voices are seldom heard.

Maternity deaths, however, are not just Dholpur's malaise. A recently released UNICEF report states that a woman dies every five minutes from pregnancy and childbirth-related complications in India. That's about 1.21 lakh deaths a year. Even more damning is the report's observation that there has been no significant reduction over the last six years in the maternal mortality ratio in India which is as high as 540 maternity deaths per 1,00,000 births, with Assam, Madhya Pradesh and Uttar Pradesh recording a high death rate of 700 or more. In fact, India accounts for more than 20 per cent of global maternity and child deaths. It has a higher ratio than Pakistan, Bangladesh and Sri Lanka.

The report also records regional disparities in maternity deaths; considerably lower in states like Kerala and Punjab, and high in Orissa, Rajasthan, UP and West Bengal. According to Dr Pavitra Mohan of UNICEF, the data put together by state governments captures only about seven per cent of the estimated deaths. In Rajasthan, the MMR of 670 deaths is at best a provisional figure. "These estimates are about six years old. There have been no estimates after that. Estimating MMR is costly and requires large samples," says Mohan. 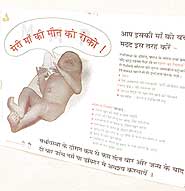 Forget the numbers, the situation on the ground itself warrants immediate action. In Aligar village, 2 km away from Tontri, 35-year-old Meera is inconsolable after having lost her baby. That the baby was a girl, and could have saved the family from eternal damnation according to a prevalent belief, only adds to the family's grief. Girls here are considered good omen, especially if born after a series of boys. At least Meera, after having four sons, is alive. While her doctor could not save the baby, she was saved from the risk of death. Only because she was lucky enough to have been wheeled in on a cart to the hospital just in time.

For Dholpur, already blighted with low immunisation levels, low sex ratio, low literacy rates and bad communication and transport facilities, corruption is another disease its people constantly battle with. There are many complaints about government doctors refusing help to poor patients in public hospitals, and directing them to private clinics, as happened in Chhaya's case. Talking to Outlook, district collector J.P. Vimal said, "We are trying to crack down on such practices and have requested villagers to bring such incidents to our notice. Severe penalties will be imposed on doctors guilty of mala fide".

There are other beginnings Dholpur is making to save its young mothers. An encouraging factor is that more and more pregnant women are going to community health centres and hospitals instead of delivering at home. In addition, the effort of a few NGOs is going a long way in bridging distance and apathy. For example, the taxi operators' association at the district headquarters has got into an agreement with villagers to rush a taxi in case of an emergency. A local NGO, Mangalam Samiti, has fixed a rate card for the transporters. A helpline number—the janani suraksha helpline—started by UNICEF is another initiative to reach help to women on time. The NGO ensures women get prompt attention in government-run hospitals and community healthcare centres. Since the helpline was started a month ago, 10 women have been rushed to hospitals on time. 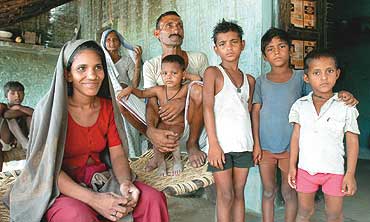 Organisations like UNICEF are working toward collating a more accurate picture of maternity deaths. They hope to achieve this through an elaborate new method called the maternal and perinatal death inquiries (MAPEDI), developed and implemented with Johns Hopkins University, US. MAPEDI uses the verbal autopsy method (interviews with victims' close kin) to get a first-hand account of maternal mortality in some of the poorest districts of India in UP, West Bengal, Orissa, MP, Bihar and Rajasthan, a task expected to be completed in the next six months.

Meanwhile, Rajasthan is also getting into partnerships with UNICEF in imparting training to midwives. Blood banks in the districts are integral to the plan. The Dholpur model of a referral transport system for prompt transfer of women with obstetric emergencies will be duplicated elsewhere. A platform for public hearings on safe motherhood in collaboration with the state women's commission has also been put in place.

Almost everyone admits that the task ahead is tough. But at least a tentative start has been made. Guddi has just had a baby girl in the district hospital at Dholpur after spending many agonising hours on the hospital floor because there was no bed. She says she would have been happier with a son. But at least both mother and child are alive. And that, say activists, is a promising sign.

Pages From An Old School Text