A book that is basic to our understanding of Mughal art and architecture. 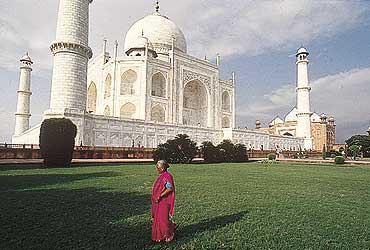 Mughal Art And Imperial Ideology
By Ebba Koch
Oxford University Press Pages: 350; Rs 1,295
Since 1982, the Austrian scholar Ebba Koch has published a series of ground-breaking studies which have made vivid the ceremonies, aspirations and artistic traditions of the Mughal rulers of India -- the Emperor Shah Jahan in particular.  I have purposely not described her as an art historian.  She is, of course, but her writings are far broader in scope than those of most of her professional colleagues.

Dr. Koch defines and discusses cultural issues of interest to political, social, and economic historians, and the points she makes are articulate and challenging.  They are also fascinating.  And because she concentrates on monuments familiar to any tourist in India -- the Taj Mahal, the forts in Delhi and Agra, and Mughal gardens -- her writings should be basic reading for any intelligent traveller on the subcontinent.

Dr. Koch began her studies of Indian architecture in the 70s, when she moved to India with her diplomat husband.  Because of previous training in art and architectural history, she was immediately drawn to the European influences which she found in the Mughal visual arts.  Her first study concentrated on the influence which the Jesuit missions had on Mughal imagery.  It was then already a well studied subject, but earlier European and American scholars had concentrated on the ways that European subjects and techniques had inspired Mughal artists to vary the expressive range of styles in which they worked.  Behind these arguments was often the sense that European works made Mughal artists aware of their own limitations.

These essays demonstrate over and over again that the reason for the artists' interest in (and comfort with) these European arrivals was in fact something quite different.  Dr. Koch charts the indigenous forerunners that allowed these seemingly imported forms to have meaning for the Mughals.  One example is the baluster column, an architectural support that, instead of a straight shaft, has a pot-like element below a shaft that is bulbous, or bulb-shaped.  This appears suddenly in the buildings which Shah Jahan commissioned for the forts in Agra, Lahore, and Delhi, and would have been known to the Mughals both by its use in European royal imagery of the early sixteenth century (with which they were familiar from portraits presented at court by European travellers) and from its appearance in illustrations for the Royal Polglot Bible. This was a series of volumes printed in Antwerp between 1568 and 1572 and given in 1580 to Akbar (Shah Jahan's grandfather) by members of the first Jesuit Mission.

The Mughals maintained a highly cosmopolitan court, however, and the question must arise as to why this particular, rather obscure detail was chosen for expansive use by Mughal architects and artists rather than some other.  Here is where Dr. Koch's contribution is most important, for she has found similar forms in the Hindu temple at Konarak (which had nothing to do with Mughal or European belief or ideology), as well as the mosques of Transoxiana -- the family home of the dynasty's founder, Babur.

She then shows that the baluster column, the well-known image of Orpheus brought from Europe and installed on wall behind Shah Jahan's throne in the Red Fort of Delhi, or the European-style angels painted on the ceiling of a palace room at Lahore -- all the subjects of essays in this volume -- attracted the Mughal's attention not because they were exotic references to (or perhaps attempts to emulate) European culture, but precisely because they were familiar forms that stimulated the Mughals to see their own artistic traditions with new eyes.  And she describes the visual context in which such forms were placed, showing that their use answered the emperors' need for visual means "to represent the reality and the glory of their own dynasty and rule."

The famous image of Orpheus mentioned above, for example, would have evoked in Mughal viewers an already familiar symbolism for Solomon -- a personage as familiar as Orpheus was not, but equally associated with images of peace,  paradisial rule, and human understanding of the languages of birds and beasts (and by extension of the universe).  That the Mughals promoted their own reign as paradisial is known from the famous inscription elsewhere in the fort at Delhi: "If there is paradise on earth, it is this, it is this, it is this."

Ebba Koch is always concerned, too, that her arguments be clear and comprehensible, and while every essay in this volume has appeared elsewhere previously, she has been disturbed by the difficulty which Indian colleagues have had in getting access to her writings.  These have often been in art historical journals, which -- especially when they are produced by German or Austrian publishers -- are often hard to find.  This book is her gift to those colleagues, a gesture as fitting as the generosity with which she provides us with information.  The photographs are well reproduced, and there are several new plans not included in the original publications.  Also, for once, the footnotes are often as interesting and readable, and as substantial, as the main text.  This is a book, in other words, that is basic to our understanding of Mughal art and architecture.

(A condensed version of the above appeared in print. The author used to be a director of the Smithsonian Institution's Freer Gallery of Art and Arthur M. Sackler Gallery)

Jinnah Unbottled? Not Yet.