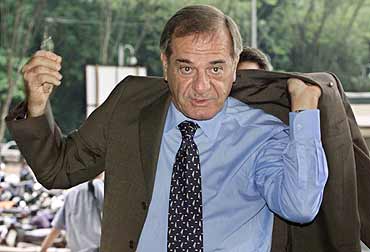 And it's not just her. Every time the Italian businessman's name hits the headlines, it also sends the CBI into a tizzy. The investigating agency has been blamed for sparing him, deliberately reacting slowly to Interpol alerts, even allowing Mr Q to get away. That said, successive governments, including the BJP-led NDA, have failed to net the man. So when Quattrocchi was picked up by the Argentinian police on February 6 while trying to enter the country, it opened a new chapter in the Q saga. The news was leaked much later to the Indian media and an embarrassed Manmohan Singh government was hard-pressed to explain why the arrest was kept under wraps for 17 days. Also, why it took the CBI nearly four weeks to dispatch a team to Argentina to press for Quattrocchi's extradition.

The investigating agency finally sent a two-man team to Buenos Aires. A fresh non-bailable warrant has been issued by a special CBI court to facilitate Quattrocchi's extradition. The team is carrying 400 pages of documents translated into Spanish and will appoint a local law firm to fight India's case which is being handled by a special prosecutor of the Argentinian government. Quattrocchi is currently out on bail although his passport has been impounded and he cannot travel outside of the capital Buenos Aires.