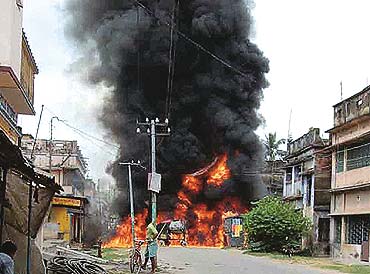 outlookindia.com
-0001-11-30T00:00:00+0553
The wheel has come a full circle in Bengal. Four decades ago, the Left led what was called the 'food riots' in the southern districts of the state. The protests, sparked by an acute shortage of food, marked the beginning of the end of Congress rule. In a dramatic reversal of fortunes, the Left Front government in Bengal now faces outrage over non-availability of commodities supplied through the public distribution system (PDS), which has been undermined by endemic corruption.

What started as small bush fires in the impregnable red fortresses of Burdwan, Bankura and Birbhum districts has now become a raging conflagration that has singed swathes of at least ten of the state's 18 districts and sent shock waves through the CPI(M), besides offering opposition parties another issue to harry the government with. What's worse for the Left, the riots against fair price shop dealers, who are mostly CPI(M) members or supporters, are only spreading and increasing in intensity.

Trouble was first reported from Bankura district's Radhamohanpur village on September 16. That morning, a clutch of CPI(M) leaders, lecturing a group of daily-wagers on the dangers of the Indo-US nuclear deal, were shouted down and asked to provide foodgrains by a large mob that descended on the venue. When CPI(M) leader Pobitra Mondal tried to shoo them away, angry villagers thrashed party leaders and burnt their flags. The police had to open fire to quell the mob. News of the incident spread and, within a day, anger against corrupt ration dealers went out of control.

Since then, hundreds of ration dealers have been attacked and their shops and houses looted. Clashes with the police have left at least three dead. At many places, CPI(M) leaders have borne the brunt of public anger. What has really shaken the party is that it all started from areas that have been unassailable red bastions. But that, says Trinamool Congress' Partha Chatterjee, is because the CPI(M) has lost touch with the grassroots. He told Outlook: "If the CPI(M) had its fingers on the pulse of the people, its leaders would have been aware of the growing anger. They have lost touch with ground realities because they have become corrupt and arrogant."

CPI(M) leaders admit in private that this is true. "In many places, our local party members and leaders have become very corrupt and high-handed. People are angry," says a senior party state committee member. But in public, leaders like state secretary Biman Bose blame an "unholy nexus" of Trinamool, Congress, BJP and Maoists for fomenting trouble.

The primary culprit, by their logic, is the Centre. Says food minister Paresh Adhikary: "The Centre slashed allotment of wheat and rice under the PDS. But prices rose sharply and forced many above poverty line (APL) cardholders to fall back on the PDS. The fair price shops couldn't cope with this surge in demand and so the resultant anger."

What he didn't delve into is that a large section of ration dealers, in collusion with corrupt panchayat members (80 per cent of panchayats are CPI(M)-controlled) and food department officials, have been diverting goods from the PDS. This is what a recent inquiry by Inspector General of Police (enforcement branch) Nazrul Islam has revealed. Also, the state has lifted only a fraction of its allotted quota from FCI godowns.

What's really galling for the CPI(M) is that party offices have been blatantly attacked at many places. The successful resistance at Nandigram has perhaps emoldened people and shattered the big brother image of CPI(M) leaders, making them vulnerable. Ultimately, this is what is most worrisome for the Marxists.