Pay packets are soaring in India, accentuating attrition rates and a supply-demand mismatch at the top level

outlookindia.com
-0001-11-30T00:00:00+0553
Over the last three years, each time I have filed a piece on salary surveys or compensation trends, the various editors concerned decided to junk them. I don’t know whether it was coincidental or by design, although my sneaking surmise is that the reason was the latter. Therefore, I decided to write this one quite grudgingly, hoping against hope that this one doesn’t meet a similar fate. Now, after poring over several salary surveys for three years, I think the reason, in fact, was that no organisation wants its employees to know that India has been the "most happening" country in terms of pay hikes. Even as unemployment levels creep up in the country, the list of the unemployed registered with the various employment exchanges increases every day, and mid- and low-level employees live under a growing fear of losing jobs, Indian firms seem to be paying more each year. It is a dichotomy that makes little sense unless one realises that companies are desperate to retain whatever talent they have—even if it means a higher outgo.

Various surveys show employees in India got salary increments which were nearly three times that of developed countries like the UK and the US, and double their counterparts in China. A recent survey conducted by global human resource services firm Hewitt, covering nearly 650 firms in the country, noted that India witnessed in 2005 an average salary hike of 14.1 per cent—the highest in the world. A similar survey by Mercer, the world’s largest HR consultancy firm, stated last year that employees in India, where economic growth is being driven by investment from the US, are expected to receive pay rises of around 11.3 per cent in 2006, while the inflation was expected to increase only by around four per cent.

The story has not been different for the past few years. India has regularly clocked annual salary hikes in the vicinity of 15 per cent and, in a way, is catching up with the compensation patterns in developed markets. Nishchae Suri, Asia Pacific business consultant leader, Hewitt, notes there is a direct correlation between robust GDP growth rates and employee compensations. "As the GDP grows at a faster clip, there is a cascading effect on companies’ budgets. Rewards are getting higher and more meaningful," he explains. The regionwide economic upswing and the global attention that India gets now prompted employers to report a more positive outlook on salary increases across industries. Though there has been an upward swing in salaries since 2002, the past two years have seen pays stabilising with no sudden inflections since 2004. 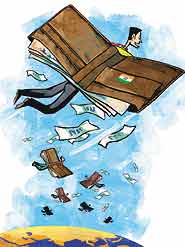 Interestingly, the surveys point out that domestic firms give higher increments than MNCs in India. In 2005, the former witnessed an increase of 14.7 per cent, while foreign-owned ones saw a rise of 13.8 per cent, according to Hewitt. "As homegrown organisations attempt to be more global and capture larger customer bases domestically and around the world, the need for good talent becomes critical," explains Suri. "Locally owned organisations are now beginning to align their compensation practices to global standards, strengthen their reward management practices and focus on pay for performance to attract and retain talent, and enhance overall productivity." The Hewitt study also highlighted that the use of variable pay as a strategic lever continues to be an important means of attracting and retaining talent, with 89 per cent of the surveyed firms admitting they have variable pay plans. Variable target payouts have increased as a percentage of the total cost to companies in 2005, compared to 2004. At the senior management level, this target payout increased to 22.4 per cent in 2005, up from 21.7 per cent in 2004.

Suri observes that organisations have generally been driven to spend each dollar wisely. "Today, CEOs and business leaders are focusing on building a high-performance environment using rewards as a differentiating tool. While 78 per cent of organisations rank pay for performance as the most important influencer of compensation strategy, defining performance standards objectively and linking them to appropriate rewards still remain a challenge," he adds. At the global level, Mercer predicted that salaries in both the US and Canada are likely increase by 3.6 per cent, while employees in the UK could expect increases of 3.5 per cent, with inflation at 2 per cent. The lowest pay growth is predicted for Germany—at 2.1 per cent, with an expected inflation of a mere 1 per cent.

An above-average increment rate points to the dark side of work environment in the country. Several sectors like aviation, retail and telecom suffer from a distinct shortage of talent. With India Inc on an expansion drive, its appetite for qualified and trained professionals in several key verticals seems never-ending. For instance, India will churn out close to 8,000 new CAs this year, but the Institute of Chartered Accountants of India estimated that the industry demand for the tribe could be as high as 10,000. In 2005, nearly 800 students who cleared the CA exam were given placements in a single day. Therefore, it’s amply clear that if it is the top management that enjoyed the highest increases in the late 1990s, it’s now staff at the professional, supervisory and technical levels who receive the highest increases. The latter group received a salary increase of 15.4 per cent in 2005, and is expected to receive an increase of 15.1 per cent in 2006.

Suri notices a supply-demand mismatch at the level of qualified professionals. "Companies are willing to pay a generous premium to attract whatever talent available in the market," he adds. In fact, most of the surveys peg the attrition rate in India at nearly 13 per cent. Points out Gangapriya Chakraverti, business leader, Mercer: "Even in engineering and manufacturing sectors, where historically employee mobility and attrition has been less than five per cent, it has started getting closer to the national levels. Several manufacturing firms which gave hikes bi-annually or even once in four years have increased salaries by 10 per cent last year." Gurdeep Hora, managing director, Synergy Consultants, a leading Delhi-based placement agency, finds it difficult to fill up 80 positions even at large telecom, marketing and financial services companies. "The attrition rates have begun to increase dramatically to reach 30-35 per cent even in the case of several top companies. In such a scenario, companies are finding it difficult to standardise salary structures for both white- and blue-collared employees," he says.

With almost 10 new low-cost airlines scheduled to launch services in the next 12 months, and domestic carriers starting flights to overseas destinations, the demand for trained pilots is far exceeding the supply. According to industry estimates, there are close to 1,200 commercial pilot licence (CPL) holders in the country, and the requirement is close to 1,800. A CPL is the minimum requirement to join an airline as a co-pilot. But it takes nearly three years of flying experience (which costs around Rs 30 lakh) to become a commanding pilot of an A320 or a 737. At present, the three major airlines—Indian, Jet Airways and Air Sahara—employ close to 550 flight commanders between themselves. "The full-service airlines pay more than Rs 4,00,000 a month to flight captains and close to Rs 2,25,000 to co-pilots. With such competition, pilot salaries are set to go up anywhere between 30-50 per cent," says a Delhi-based aviation analyst.

As pharma companies focus on drug research in the new patents regime, finding seniors who can lead a team is proving to be a challenge. "Recruiting junior-level scientists is not an issue. But what we don’t get easily are the thinkers," says Swati Piramal, chief scientific officer and director (strategic alliances), Nicholas Piramal. Of the 300 scientists that Nicholas Piramal employs currently, almost 50 are from foreign universities. It’s estimated that India will require a pool of 15,000 scientists and PhDs each year for the next five years, while the local universities can fill around 10,000. "The shortage in niche areas like pharmacology and bioanalytics is bigger. Working on new drugs and filing patents is a whole new ball game for our scientists. It will take some time for them to learn," she adds.

Another flip side to this happy story: with salaries rising so fast, India could soon lose its famed cost competitiveness. Says Y.V. Verma, senior vice-president (HR), LG Electronics India: "We have given our employees an average hike of 21 per cent. And it has only gone up compared to the previous years. It is definitely an unsustainable and unhealthy growth. The global salary increment rates are half that of India, and if you take into account the cost of living here and the purchase power parity the senior management salaries In India would only be 15 per cent lower compared to the west." That also explains why Indian companies in the IT and BPO sectors operating in the lower end of the value chain are losing some of their businesses to countries like the Philippines, Poland and Romania. "Nobody as yet is questioning the value delivered by Indian companies, but we should be careful not to outprice ourselves. Several clients are pushing us to keep our agent costs down to the 2002-03 levels," says an IBM-Daksh executive. If the trend continues, India may lose its competitive edge in services, and never be able to become the global manufacturing hub (as wished by the Union finance minister).