Kuldip Nayar forsakes his allowance, most others see it as gimmickry 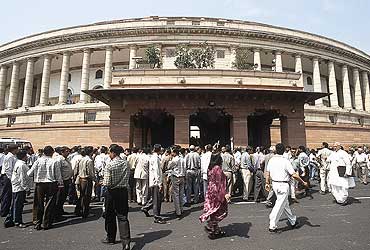 outlookindia.com
-0001-11-30T00:00:00+0553
No work, no pay is the guiding principle for all trades universally. Most Indians have learnt to live by that principle. But their political masters believe that such work ethics do not apply to them. Virtually every working day of the last Parliament session was adjourned due to disruptions by political parties over Armsgate. Yet no parliamentarian, save for one Rajya Sabha MP, thought it fit to forgo his allowance for the days that he felt Parliament did not function.

Veteran journalist and nominated Rajya Sabha member Kuldip Nayar has set a precedent of sorts by voluntarily seeking deduction of his daily allowance of Rs 500 for the days when the Rajya Sabha was adjourned without transacting any business during the first half of the budget session.

Interestingly, Nayar's plea has been accepted and for the first time in parliamentary history, a member's daily allowance has been deducted for the days on which the house could not transact any business.

In his letter addressed to the chairman of the Upper House, Nayar has expressed his dismay over the repeated disruption of the session by stating the house had to accept what one party or the other decided on a particular day. And that as an independent member he had no say in the matter.

Now that the Rajya Sabha secretariat has deducted Nayar's allowance, it remains to be seen whether this will be seen as a precedent for members of both houses. Says Najma Heptulla, deputy chairperson of the Rajya Sabha: "Mere deduction of daily allowances of members does not solve the problem. It will not ensure that the house transacts legislative business. The paramount concern is that the house should be able to conduct business. Nayar's is a good gesture but it leads us nowhere. In fact we should focus on the larger issue of restoring the principles of our democracy by mutual discussions between members of all parties."

But Nayar begs to differ: "Deduction of my allowance implies that in principle it has been accepted that members should not be paid daily allowance when the house is adjourned. As another option, the authorities should urge the conscience of members to go in for deduction and in case they have already taken the money, agree for its refund."

Not all buy Nayar's line. Says the SP's Amar Singh: "When the house isn't allowed to run, it doesn't mean all intend to do so. There are members who're willing to allow the house to do business. So deducting the allowance of all will be unfair." Congress MP and advocate Kapil Sibal agrees: "For instance, I refuse to take up cases when Parliament is in session. If the house is adjourned and members' allowance deducted, people like me will lose out on two counts. So it should first be thrashed out what the basis should be on which your daily allowance is paid. This has to be institutionally dealt with. It cannot be decided by an individual action like Nayar's."

Other MPs feel Parliament can't be disciplined by merely cutting allowances. They are of the view that the question of disrupting Parliament is a political question and merely denying MPs Rs 500 a day will not act as an effective deterrent. Says the bjp's Vijay Goel: "One should understand that members don't attend Parliament to earn a paltry sum. And it is folly to believe that deducting their allowance will restore order in the house." The Congress' Arjun Singh holds the same view: "I cannot see how deducting the allowance will restore order in the house. It is not the responsibility of the members that the house transacts business."

cpi(m) politburo member Sitaram Yechuri doubts the efficacy of Nayar's initiative but acknowledges the need for undisturbed transaction in the house. "This is basically a political problem which cuts across the political spectrum. During the Bofors, Sukhram and Narasimha Rao episodes, the same party which is in power today didn't let the house run. At the same time, we need to evolve some norms that issues of national interest are expeditiously decided upon without being affected by repeated disruption of the house."

Though Nayar's initiative is drawing scant support, the larger concern for restoring an atmosphere conducive to transacting business in the house is being voiced by all political parties. But whether this concern translates into smoother functioning of Parliament will be tested when the house convenes for the monsoon session.