Modinomics On A Roll

The PM is all set to turn the budget into a mere accounting statement, starting 2017 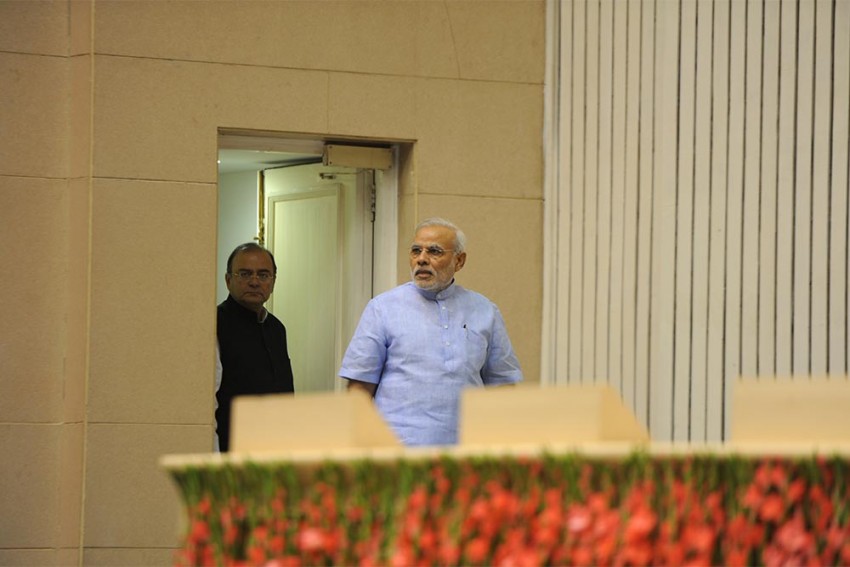 Experiments With Power
The ­defining ­feature of Modinomics is experimentation
Photogaph by Jitender Gupta
Zia Haq December 01, 2016 00:00 IST Modinomics On A Roll 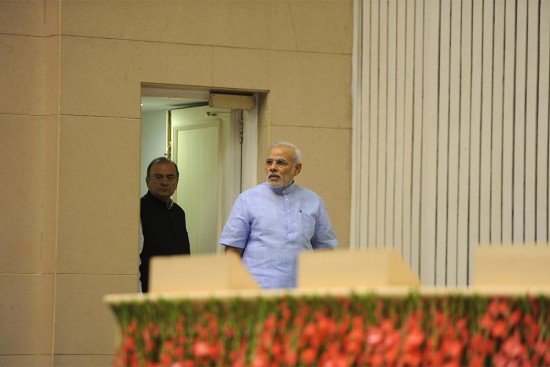 Critics haven’t stopped taking potshots at the Modi government over the crash demonetisation of Rs 500 and Rs 1,000 notes amounting to a total of Rs 14 lakh crore. Those who support it as a bold move are fretting too. It’s been untidy: queues outside banks, cancelled weddings, and cash-strapped small traders, farmers and daily-wage earners. But here’s the rub: Prime Minister Narendra Modi will halt at nothing to completely reorganise Asia’s third-largest economy. There’s a lot more structural reforms lined up; expect the full spectrum to take effect by early next year.

To begin with, the Modi government has advanced the Union Budget 2017-18 by a month to February 1—a precursor to a more fundamental change being mulled: merging of the country’s April-to-March fiscal year with the calendar year. Officials say one advantage of a merged calendar is to make the budget monsoon-proof. A winter budget that comes after the monsoon months makes sense as weather shocks, which usually mean unexpected government spending due to droughts, can be accounted for.

Budget 2017 will have many firsts. It will ditch the distinction between plan and non-plan expenditures, a remnant of India’s planned economy, and do away with the separate rail budget. Although the government has junked the Planning Commission, the 12th Plan is theoretically in force and will close next year. Taking its place will be 15-year perspective plans, which the government’s policy think-tank, NITI Aayog, is already working on. Sources say the PM may declare it officially next year.

So, what do these changes mean for the economy and the people? Traditionally, while presenting the budget, governments announced programmes and projects as part of plan expenditures. Non-plan expenditures, which are more like a firm’s repair costs, included things like salaries. This meant governments had to wait until the budget to announce big programmes, instead of more politically opportune moments. The next budget will switch to capital-and-­revenue-expenditure nomenclature instead, a more contemporary public-­finance practice. Officials say this will also serve to delink policies, programmes and ­reforms from the budget.

“Structural reforms are very much needed,” says Amitabh Kant, CEO of NITI Aayog. “We don’t need incremental changes anymore. We need transformational changes.” Analysts say Modinomics—a label for Modi’s economic thinking—is premised on the belief that India needs to break from its colonial and Nehruvian past to press forward. Its defining and, at times, outlandish feature is experimentation. The basic objective is to move things fast. Once the Planning Commission ceased to exist, the plan-non-plan distinction has become administratively meaningless.

Budget 2017 has been ­advanced by a month to February 1—a precursor to a bigger change being mulled: merging of the fiscal year with the calendar year.

Another first in the next budget, says an official, is that it is likely to contain indicative expenditure projections for major programmes for the next three years. Estimates of future spending have become necessary to avoid fund crunches, such as in the rural jobs scheme NREGA.

Burying the rail budget means the railways won’t pay a dividend of at least Rs 10,000 crore anymore to the government. This is expected to free up reso­urces for the railways.

The annual budget evokes popular ­interest among millions of Indians, rich or poor, because it is a barometer of how expenses go up or come down. With a slew of indirect taxes on household items from cigarettes to shoes going out of its domain and into that of the Goods and Services Tax, the budget will be a mere accounting statement. That’s what the Modi government wants it to be.

If Modi scrapes through, without having to pay any major political costs of demonetisation, the government could turn next to a touchy area: farm-sector income.  Farm income has been tax-free so far, partly because farmers have been treated as a source of votes rather than revenue. This, along with land redistribution in the 1950s, gave rise to what political scientists Suzanne and Lloyd Rudolph called “bullock capitalists”, a label for powerful agrarian classes.

The Modi government has quietly started scrutinising farmers’ incomes for potential mismatches. The monitoring, as of now, is limited to analysing if big farmers, who also have allied businesses, are passing off non-farm income as farm income. That the Modi government isn’t leaving farm income unwatched should not be surprising as, following demonetisation, all deposits of over Rs 2.5 lakh get vetted automatically. Take this November 9 tweet by Union revenue secretary Hasmukh Adhia for instance: “Farmers should not worry at all…. However, farmer’s income should not be disproportionately high compared to the yield expected from the land owned by him.”

A tough law to crack down on benami transactions—purchase of property under fictitious ownership, a major way of hoarding ill-gotten wealth—has alr­eady been in force since August.

The Arun Jaitley-headed finance ministry continues to throw up smaller proposals linked to demonetisation. This week, it declared yet another ­amnesty for those dodging tax, linking it to an anti-poverty scheme, the Pradhan Mantri Garib Kalyan Yojana.

A less examined side of Modinomics is what it means for the states. The framework has been to get the states off the Centre’s back and free them up both financially and adm­i­nistratively. “Find your problems and your solutions too” seems to be the message. That was the purpose behind the 14th edition of the Finance Commission, the constitutional body that splits revenues between the Centre and the states, recommending an increase in the share of states in the Centre’s tax revenues from 32 per cent to 42 per cent.

The demonetisation drive will itself necessitate new administrative ways, especially on how resources are collec­ted and disbursed at the state level. Take, for instance, cash collections at panch­ayat or municipal levels. Last week, NITI Aayog’s CEO, Union finance secretary Ashok Lavasa and chief secretaries of all the states talked about digital payments. Administratively, with the Planning Commission gone, the states must now also decide how and where to spend resources on their own.

“Funds have been routed so far through the Finance Commission or through ministries,” says Prof Vinod Vyasulu of the Jindal School of Government and Public Policy. “Now the states must think what’s best for them. It’s a challenge for many as they look back nostalgically at the good old days when the Centre guided them.” In fact, many states don’t quite have the expertise to take independent decisions on spending. This was highlighted in a dissent note by 14th Finance Commission member Abhijit Sen, an economist who was also a member of the Planning Commission. The PM, however, is firm that the Centre can’t go on handholding the states.

Modi aims to leave his stamp on political reforms too. He wants to move tow­ards a regime of simultaneous state and federal elections. The NITI Aayog has started the spadework to provide a framework. The idea isn’t new. In 1999, the Law Commission, led by Justice B.P. Jeevan Reddy, had come out with the 170th Report on Reform of Electoral Laws.  Between five to six states, on an average, go to polls each year. Fifteen Assembly elections were held between March 2014 and May 2016 alone. According to NITI Aayog economist Bibek Debroy, that’s a drag on programmes, policies and the economy on the whole. “A serious need to evolve a mechanism to end these frequent election cycles has been expressed by various stakeholders since quite some time,” a NITI Aayog document states.

With such an ambitious sweep of ref­orms, the Modi government’s could eit­her succeed or fail, but it’s surely going to be spectacular either way.

Brace For More Of The Same