Modi Still Alone At The Top

Popularity surveys suggest no opposition leader on his or her own can challenge Modi in 2019. Here are the implications.

One big political question that is being asked these days is who could challenge PM Narendra Modi in 2019. All opposition parties are making desperate ­efforts to form an anti-Modi front at the national level to prevent a BJP victory.  There are hurdles, of course, in moving forward to form this alliance, the biggest being the question of who would lead it. The political parties may be still contemplating on this issue, but the answer seems to be quite straightforward: among the leaders of the ­opposition parties, there is nobody who can pose a challenge to Modi in 2019 solely on the basis of his or her own popularity.

Even though there has been some decline in Modi’s popularity, as is evident from recent surveys conducted by the Centre for the Study of Developing Societies, Delhi, he still remains far more popular than any leader of the opposition parties.

At the moment, there is no match to his popularity at the national level, though some leaders of regional parties are at least equally popular, if not more, in their ­respective states (see graphics 1 and 2). Such leaders, however, can pose no threat to Modi at the national level as their ­popularity does not travel beyond the borders of their own state.

The findings of the surveys clearly indicate that the qualities people like in Modi are those of a good administrator with an ability to provide good governance, besides good oratory, honesty, experience, decisiveness and hard work. Many of the leaders belonging to the opposition parties—for instance, Mayawati, Mamata Banerjee, Naveen Patnaik, Akhilesh Yadav, Tejashwi Yadav or Arvind Kejriwal—may also be seen as possessing some of these qualities, but only by voters in their own states.

The findings indicate that Rahul Gandhi is more popular than Modi in the southern states, but trails behind him by huge margins in all other ­regions (see graphic 4).

What makes the task of judging who could lead the opposition—or who is best suited to challenge Modi in 2019—very tough is the lack of clear parameters for judging the ability or quality of leadership. The only qualities ass­essed are popularity and the ability to pull votes for the party across reg­ions and social groups. Even those are not easy to figure out. 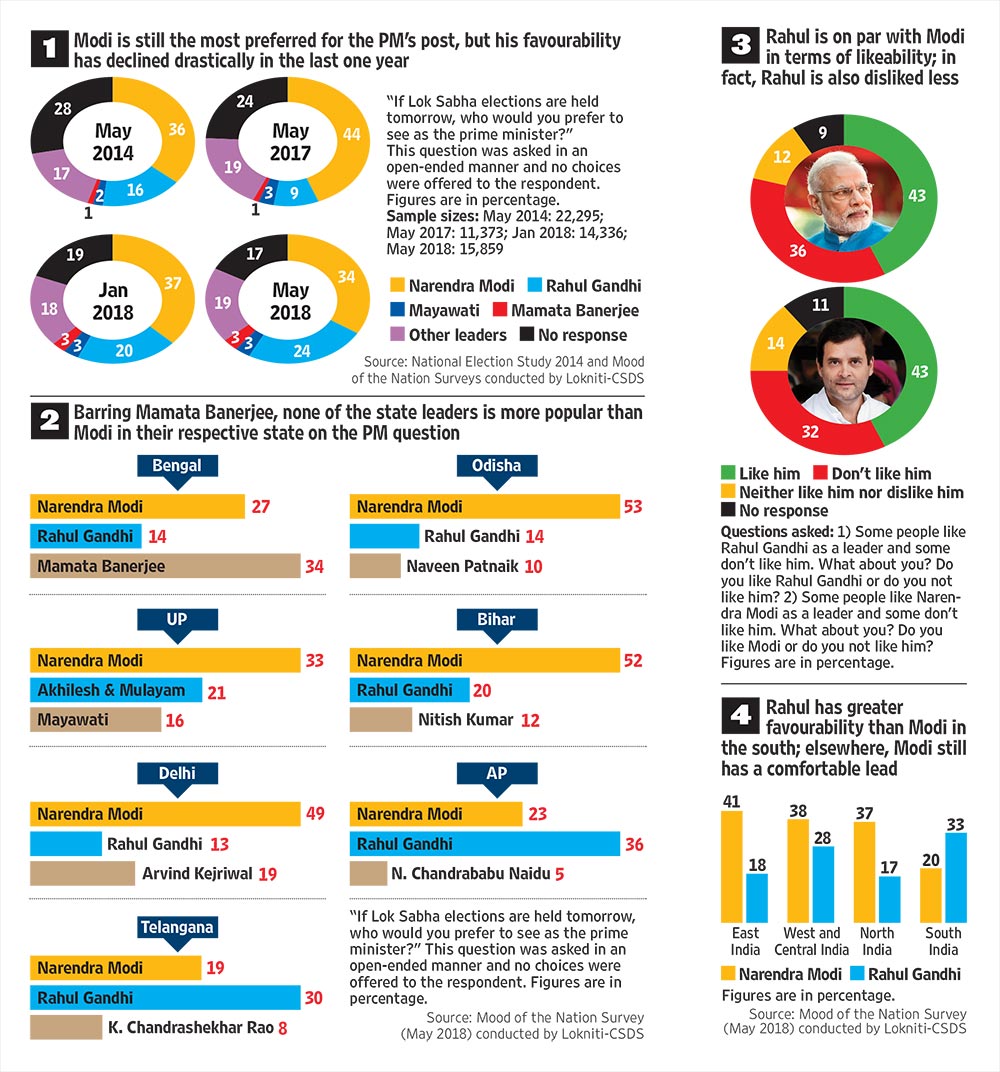 There is hardly any science or arithmetic that could help us judge leadership ­qualities with a degree of certainty and hence there is no option but to rely on the findings of surveys. And the survey thermometer indicates that Modi has a national appeal to a great extent, and that he enjoys popularity in varying degrees in different states and regions, with hardly any match to his popularity at the national level.

Given this scenario, I think the opposition parties may find it extremely difficult to choose a candidate who could challenge Modi at the national level. He can only be challenged by a collective but decentralised leadership, keeping in mind the state as the unit of electoral contest. The leader who is popular in a given state should be able to challenge Modi there, and leaders of other parties should be willing to accept his or her leadership in that state.

While the opposition parties may find it very difficult to work out this leadership question at such a micro level, the least they could do is to allow a regional party leader who seems to be popular in a particular state to challenge Modi in that state. The question of all-India leadership can be discussed or debated best only after 2019, when all the opposition leaders would be willing to accept the leadership of the leader of the party that wins the largest number of seats, in case that situation arises.

(The writer is director of the Centre for the Study of Developing Societies, Delhi)