Will he run the country like he’s run his campaign—around himself? 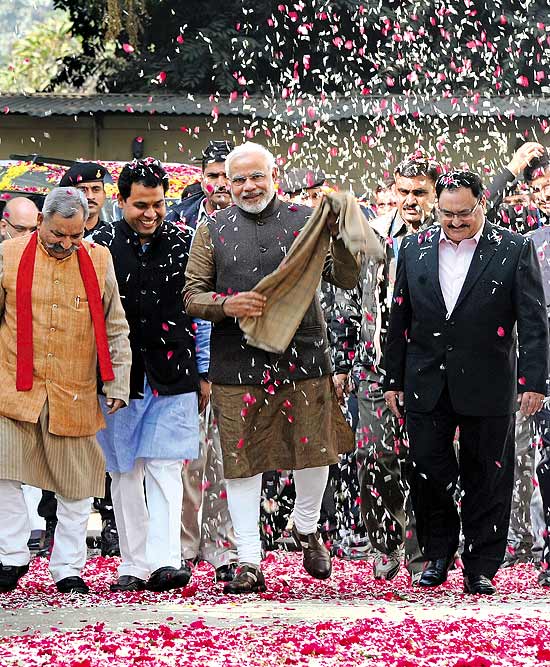 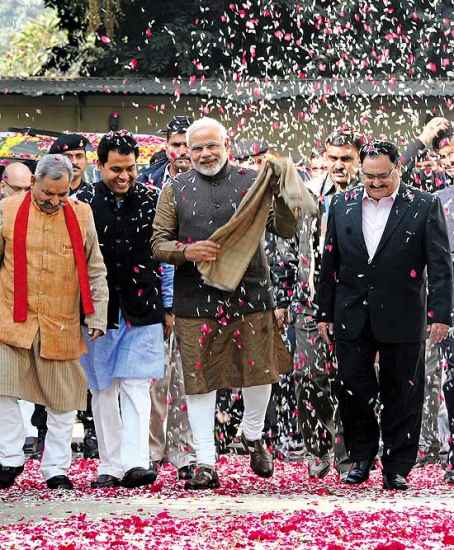 How Narendra Modi Fashioned An I-Me-Myself Style Of Campaign

The capitulation and surrender by BJP veteran L.K. Advani can possibly be seen as the veteran reading the writing on the wall. At the release of the party’s manifesto in New Delhi last week, the 86-year-old said that he does not remember feeling such “joy” during the 16 elections he has seen in his lifetime. He then went on to endorse precisely what he had bitterly fought against over the past year: “I don’t remember ever such an advantageous reaction to the announcement of a PM candidate...the campaign that followed has been unprecedented.”

It has actually been the biggest blockbuster campaign of all times in Indian history. Modi Shining, Modi Smiling, Modi Descending, Modi Coming...Brand Modi has been energetically and carefully crafted, deliberately built around just one man, reducing others to footnotes. More than just being Him and His Will, there has also been the natural evolution of a process and strategy to bombard India with a presidential-style campaign in an age of media-driven personality politics. Besides the traditional BJP apparatus, now flush with funds (that are apparently more than that of the party that ruled India for the last decade), there are independent groups of the faithful not directly affiliated to the BJP/RSS but followers of Modi who have taken time off to work for the campaign.

Certainly a month before the electoral verdict, it does appear that Modi has made all, party and parivar, the instrument of his will.

Besides the traditional party apparatus, independent groups of faithfuls have taken time off to work for him.

Equally, it must also be said that Modi has opened up great possibilities for them. In parts of India where the party’s election symbol, the lotus, is not recognised, Modi now is. Says Chennai-based Lalitha Kumaramangalam, a member of the BJP’s national executive, “Here, the lotus is now getting recognised as Modi’s symbol, as when we started off this campaign there was no recall value for the BJP.” The party’s spokesperson, Ravi Shankar Prasad, says that be it at the state level or the national, it is now strong personalities that prevail in elections. “Some people are inspired and see hope in the personality,” he says. “Others are reacting badly because Modi is not from the Delhi establishment, and they feel threatened by an outsider.”

Certainly, the possibility of Modi becoming prime minister challenges cosy privilege. But more fundamentally, he stands for a recasting of the idea of Indian nationhood. Were he to succeed, Modi would have followed a tradition of strong muscular right-wing world leaders like Russia’s Vladimir Putin and Japan’s Shinzo Abe, who have also stoked sectarian differences, and yet emerged stronger than the forces they beat down. They combine nationalism underpinned with a sectarianism, yet prevail as reformers and agents of change. Modi could be poised to do just that.

“In Chennai, the lotus is now getting recognised as Modi’s symbol. When we started off, there was no recall value for BJP.”
Lalitha Kumaramangalam, BJP national executive

A month ahead of verdict day, there is slow acceptance in Delhi’s corridors of power that the Modi blockbuster is clicking, with even influential Congress leaders privately conceding defeat. Key players in the Modi campaign have meanwhile moved to the next stage of planning: how Modi will perform when (and not if) he becomes PM. Indeed, after so much hype, how will he perform the many miracles he has promised in his relentless campaign? Sources close to him say the blueprint for Modi’s India lies in pursuing a “powerful” economic agenda, and doing so very quickly. According to this scenario, were he to become prime minister, he would enter office and just start clearing long-pending projects, both Indian and foreign. Some may have to be ruthlessly implemented (Posco perhaps). The UPA regime held up projects due to differences within the Union cabinet (say between environment and petroleum ministers), say Modi’s advisors. None of that, but naturally, will happen in a dispensation led by him.

Like in Gujarat, therefore, Modi will function as a single window clearance. Sources say that Modi would also be inclined to take on the RBI to bring down interest rates, curb the role of the Planning Commission, give packages to states from where alliance partners have come or otherwise need to be wooed. “His target will be to change the sentiment of the economy and to create jobs,” says a veteran BJP leader. It’s all as ambitious as the campaign that is now being witnessed by the country.

One can, therefore, only conclude that not only has Modi run a presidential campaign, were he to get the numbers, he would even function more like a president than a prime minister who remains accountable to his cabinet. That is why it is no secret that the RSS and many BJP leaders are hoping for a modest win, just upwards of the BJP’s 1999 record of 182 seats that would leave Modi dependent on allies and his own ideological parivar and party colleagues. Yet, the possibility of him running away with the show cannot be ignored.

“Some see hope in personality, others are reacting because Modi is not from the Delhi establishment.”
Ravi Shankar Prasad, BJP spokesperson

BJP vice-president Mukhtar Abbas Naqvi, who has overseen the logistics of many party campaigns, admits that this surpasses anything in the past. Atal Behari Vajpayee too was a leader around whom a personality-based campaign had been built. But he never canvassed personally to the extent that Modi is doing. At the most, he would address two rallies at the peak of an election campaign; Modi addresses four to five a day. Says Naqvi, “What is also significant is that he goes to far-flung areas where there is no settled BJP vote or expectation of winning a seat.”

This strategy has paid off as the man once considered untouchable can now boast of having 28 smaller parties on board the NDA formation. The more significant players, such as the dmdk in Tamil Nadu, the ljp in Bihar and the TDP in Andhra Pradesh, came on board after it appeared that the Modi campaign was gaining momentum. Says right-wing columnist Swapan Dasgupta, “The trend for the past decade suggested that the age of mass rallies was over. Modi has reversed that trend.”

How was it all done? At the heart of the planning was Modi himself. Leader of the Opposition in the outgoing Rajya Sabha, Arun Jaitley, and national treasurer of the BJP and head of the party’s ‘information commu­nication campaign committee’, Piyush Goyal, played the role of facilitators and enablers of a campaign that then moved through the process in the traditional BJP structure. Leader of the Opposition in the outgoing Lok Sabha, Sushma Swaraj, did suggest making the campaign more about the party than a personality, but there was no other voice of dissent.

Key players in the Modi campaign have already moved on to how he’ll perform when, not if, he becomes PM.

Ever since, the campaign has moved at various levels. There is a building in Lodhi Estate in Delhi where professionals work on the social media and communication strategy, releasing jingles, brainstorming to get just the right nuance for each stage of the electoral battle. There is the formal party release of advertisements prepared by a subsidiary of advertising agency o&m. But at each stage, various loyalists have been consulted and asked for inputs. This includes former Britannia Industries MD Sunil Alagh, Swapan Dasgupta and fellow journalist Ashok Malik. Besides, Modi has over several months been consulting many economists and strategic thinkers.

He has also quite deliberately chosen to operate out of Gandhinagar and not set up camp in Delhi. Even so, he has retained the presidential-style approach to managing his own election. There is, for instance, an independent real-time poll tracker whose results are not shared with the entire BJP but only with those who are seen to be part of the trusted core. It has a good sample size, is done in the greatest confidence, and the results are handed over to Modi who is quite adept at going through and reading data.

The presidential style of campaigning, says a senior leader, “was intended to gloss over differences of caste and identity”. It is also meant to just ride roughshod over traditional arguments of secularism and communalism, socialism and capitalism. And to surmount the conventional wisdom that the BJP can never cross a certain threshold. Whether or not Modi can prevail over all the ambiguities and diversities of India with a single unitary message remains to be seen. But what has increasingly become clear is that his campaign has already succeeded beyond the expectations of some of its early promoters and planners.

Were he to get the numbers, sources say, Modi will function as a president rather than a PM accountable to his cabinet.

Yet, what cannot be ignored in this very presidential run for the prime ministership is the fact that for all the gloss and sophistry of the campaign and talk of a “great economic vision”, there is some pretty crude elementary politics of Hindu versus Muslim at the heart of the strategy. His footsoldiers and candidates in the Hindi heartland exult in a campaign that has both overt and covert references—never too far from the surface though—to minorities as somehow being agents of Pakistan and/or terrorists. Every now and then, Modi too has carefully queered the pitch, perhaps when referring to a rival as a “Pakistani agent” or talking of the “pink revolution” (promotion of slaughterhouses and meat export by the UPA, he has alleged). The Man from Gujarat does indeed have the knack of pressing all those subliminal buttons. Yet it’s also undeniable that Modi’s packaging is overwhelmingly about development and growth, and the “diversions” have taken place in particular venues.

The needs of the campaign in Uttar Pradesh, trusted to Modi’s key aide Amit Shah, will determine the rhetoric from now to May 16 when the results are declared. Some trends will become known to the political class after the first two dates of polling in the huge state. By April 10 evening, 10 seats of western UP will have voted; 11 more on April 17. This is the region that has one of the highest percentages of Muslim population in the state, between 25 to 35 per cent in seats like Rampur, Amroha, Bareilly, Aligarh. Riot-hit Muzaffarnagar, part of this belt, too goes to the polls on April 10.

Those with their ear to the troubled and polarised ground of Uttar Pradesh say that by the time the first two phases in the state are done, some clarity will emerge as to whether there will be a modest improvement of seats for the BJP or an almighty surge that will then impact the rest of the phases in the state up to May 12, when Modi’s own seat Varanasi goes to the polls. If Modi’s rhetoric becomes overtly communal, then one can perhaps surmise that his special election tracker polls are telling him that a certain “charge” needs to be given to the campaign along old faultlines. President Modi is ambitious and skilled enough to both fly high and to strike low.

The seeming hunger for Narendra Modi’s leadership style mirrors the rise of similar top-down, authoritarian  figures in Asia and Europe