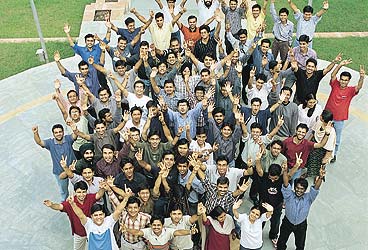 Three years ago, Indore’s cobbler community had a huge problem marketing their wares. Far away, in Kerala, the Usha School of Athletics, set up by former sprint queen Pilavullakandi Thekkeparambil Usha, was trying to think of ways to woo sponsors. Help for both came from unexpected quarters. A bunch of students from iim, Indore, aided by leather goods maker Tata International and several self-help groups, devised a model that resolved the issues troubling the cobblers. And another lot from iim, Kozhikode, enabled the athletics school to overcome its teething troubles.

Strictly speaking, the two instances were independent endeavours of the two iims. But they give a strong whiff of the socially oriented mindset at the two institutes, both of which were set up in 1997 and are much younger than their esteemed counterparts in Ahmedabad, Bangalore, Calcutta and Lucknow. As such, one cannot help inferring that the new iims have realised that focusing on issues like community development is a better way to establish an identity for themselves. (In the Outlook-Cfore survey, IIM-I is ranked 11, and IIM-K 10.)

In fact, the new IIMs would have us believe it’s better to be young even in the world of B-schools, where age often equals reputation. "IIM-I and IIM-K have had an accelerated progress; they have done in five years what others may have taken 20 to do," says IIM-I’s acting director S. Sudharssanam, a bureaucrat in the Union hrd ministry. He adds that they also had the benefit of learning from the experiences of the other IIMs and, as such, did not have to reinvent the wheel.

For instance, while IIM Lucknow, set up in 1987, took almost 13 years to move to a permanent campus, IIM-K has already moved to its 97-acre abode ensconced in the hills of the Wyanad Range. And IIM-I is moving to its permanent campus—a truly picturesque one spread over...