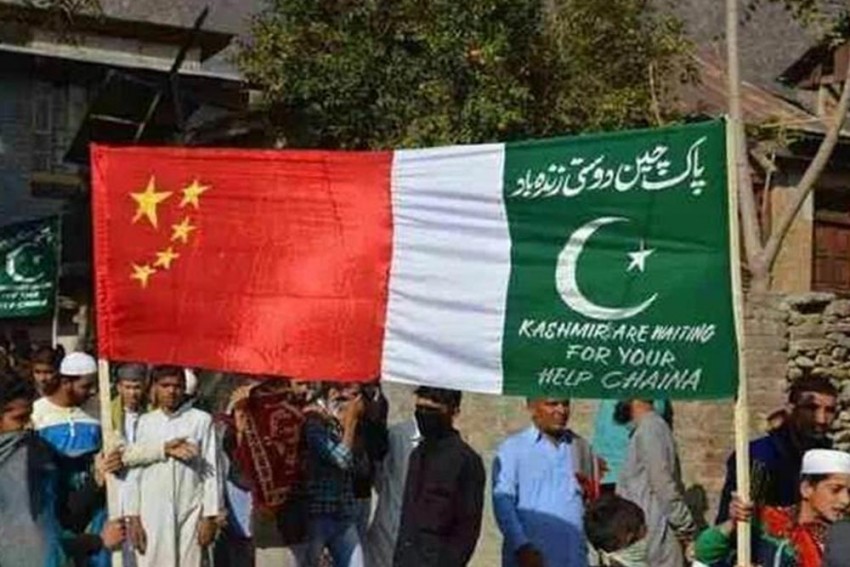 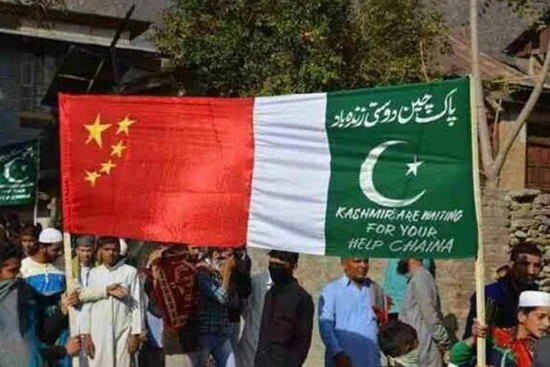 Kashmiri separatists have shrugged off a bout of fear they suffered on first learning that Donald Trump has won the election for the US head of state. For, the President-elect rang up Pakistan Prime Minister Nawaz Sharif to convey that he (Trump) can use his “extraordinary deal-making skills” to reduce tensions around the world. It should help resolve territorial conflicts, including Kashmir in the Indian subcontinent, according to a statement later by Mike Pence, who is to take charge as America’s 48th vice-president on January 20 next year. That “terrific and fantastic” phone call in end-November has led to septuagenarian Trump being seen as a harbinger of new hope. At least for the time being. He is being understood as someone who would push Islamabad and New Delhi towards settling Kashmir.

For long, Kashmiri separatists—be it a hard-liner like Syed Ali Geelani or the moderate Mirwaiz Umar Farooq—are seeking third-party mediation to resolve the seven-decade-old Kashmir dispute. It has remained the main plank of their politics. In 2011, when the Barack Obama administration appointed Richard Holbrooke as the special representative to Afghanistan and Pakistan, the separatists had expected the inclusion of Kashmir in the brief. India disapproved the Holbrooke appointment, prompting Washington to confine the envoy’s jurisdiction to just Af-Pak. Still, according to the sources, Mirwaiz had a one-one-one with Holbrooke—in Dubai. The aides of the separatist leader called it a “chance meeting”.

The Obama years (starting early 2009) have shown the US taking no interest in Kashmir. It had led the separatists to look eastward and talk aloud that China has a role in resolving the dispute. They welcomed Beijing for its practice of giving stapled visas to the residents of Jammu and Kashmir. Such overtures have seeped deep into the Kashmiri psyche. So much so, protesters in the Valley did something this year for the first time since insurgency broke in 1989: they raised the Chinese flag. It surprised the police and India’s intelligence agencies. Holding aloft Beijing’s red piece of fabric sporting five yellow stars was an “expression of anger against India”, the separatists said, adding, their “real faith has always been” on the US.

Pence, 57, has brought optimism among separatists and mainstream Kashmiri politicians at a time when India and Pakistan are not even on talking terms and responsible ministers of both the countries are talking about wars and nukes.

Obama’s disinterest in Kashmir led the hardliners to see Beijing as a potential resolvent. This year, a rally had Chinese flags raised, stumping India’s intelligence.

Mirwaiz, as the chairman of a moderate faction of the Hurriyat Conference, is hopeful of a possible change in the American policy under the Trump administration towards South Asia, particularly about Kashmir. “I am expecting a hard-line stance on Kashmir by the new American administration,” he told Outlook. But, given Pence’s statement about Trump’s “extraordinary skills”, the Hurriyat “foresees American intervention” in the Valley. “We are for an active third-party intervention,” he says. “Dialogue between India and Pakistan has never reached anywhere.”

According to Mirwaiz, American intervention alone can save the situation in Kashmir, over which bilateral dialogue has not succeeded by far. He sees the “political dispute” as one that New Delhi “always tried to project as a case of terrorism to justify human-rights abuses in Kashmir and suppress the yearning for freedom”. America has to play active role, he adds.

The National Conference (NC), which recently announced a policy change with its president Farooq Abdullah calling the opposition party’s workers to follow the Hurriyat Conference, is not against a third-party intermediation either. Only that it has conditions attached to any such involvement. “We believe Kashmir can be resolved only through meaningful and lasting bilateral dialogue between India, Pakistan and stakeholders within J&K,” NC spokesman Junaid Azim Mattu says. If anybody facilitates such an engagement that is mutually acceptable to New Delhi, Islamabad and the stakeholders in J&K, then “there would be no reason to oppose it”.

Finally, after five month’s of protests that followed the killing of young militant Burhan Wani by security forces on July 8, the separatists have found joy in two statements: by Pence and Dr Abdullah. Analysts caution against “reading too much” into Pence’s statement amid a power transition in the US, but see “watershed” in the NC’s pro-Hurriyat statement. “Dr Abdullah is the most senior leader in Kashmir,” points out Gul Wani, who heads the political science department of Kashmir University. “His stand indicates that moderate mainstream is getting completely decimated in Kashmir.”

Dr Abdullah, on the occasion of the 111th birth anniversary of his legendary father and party president Sheikh Mohammed Abdullah, asked fellow NC leaders and followers to follow the separatist amalgam of the Hurriyat Con­ference. In the state capital on December 5, party workers responded positively to the direction with slogans Insha Allah, Insha Allah, giving stunned netas more jaw-dropping moments. 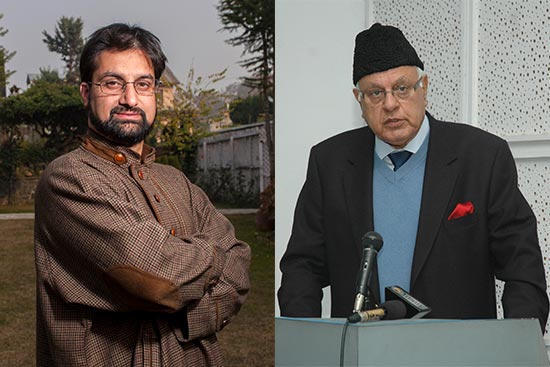 “I ask them, these Hurriyat leaders, don’t remain in different groups. Be united. We are standing by your side at this hour. Don’t consider us as your (Hurriyat’s) adversaries. We are not your enemies,” the 79-year-old said with all seriousness at the Sheikh’s mausoleum at Naseem Bagh overlooking picturesque Dal Lake. “We too have been in the struggle. We have ruined our whole life for it (Kashmir). That is why I am telling you from this venerated place, move ahead, we are with you until you are treading the right path and until you take this nation on the right path.”

In chaste Kashmiri, Dr Abdullah described as “fire” the latest unrest in Kashmir. “This fire will not extinguish until India and Pakistan do justice to the people of J&K and Ladakh. The more they will try to put it out, the more it will ignite.” He then gave the NC workers a clarion call to not veer away from tehreek—a word Kashmiris and separatists commonly use for their struggle for “right to self-determination”. He invoked Sheikh’s long battle during Hari Singh’s rule (1925-47) as the last Kashmir maharaja against whom Sheikh launched a Quit Kashmir Movement in 1946.

Dr Abdullah narrated an incident where the “oppressive” Dogra king’s army fired upon a gathering of Kashmiris fighting for their rights, injuring a mutineer who died in Sheikh’s arms. “The martyr told my father he has done his work; now it was Sheikh’s duty to do his job,” the NC leader recalled. “Now it is your responsibility to carry forward Sheikh’s mission.”

Outside the Valley later, Dr Abdullah stood by his speech. “Why should I alone be blamed” when the ruling Peoples Democratic Party-BJP alliance was itself committed to talks with the Hurriyat as per its agenda, he asked. Ex-chief minister Omar Abdullah, who was all along silent over the controversy, sided with his father and tweeted, “He has a point!!!”

Mirwaiz welcomed Dr Abdullah’s statement, saying it vindicates the stand of “pro-freedom parties that Kashmir needs resolution, not diversions.” He hoped the top NC leader would follow the spirit of his statement by siding with the Hurriyat, given the expected change in the American line beyond pushing India and Pakistan into talks. The Hurriyat had earlier invited pro-India parties, including the NC, to be part of the current unrest. “We hope the Abdullahs are not using such statements as an election gimmick,” Mirwaiz says.

The state administration found Dr Abdullah’s statement as “proof” to the NC’s hand in the post-Wani turmoil. Chief minister Mehbooba Mufti said “criminal elements got involved in the protests”, burning schools, damaging vehicles and attacking army camps. The PDP leader accused Dr Abdullah of directing his workers to derail the “now improving situation” in the Valley. All the same, she recalled that Omar and his father were “previously anti-Pakistan” and Dr Abdullah once wanted separatist leaders to drown in the Jhelum. Snubbing the NC’s “new-found love for Tehreek”, she said Dr Abdullah’s party had nothing to do with the “struggle of Kashmiri people”. “Every movement they started was for the chair,” the CM added, attacking the NC’s “new-found love for tehreek’”

On December 12, Mehbooba pushed the discourse further, again calling for a dialogue with Pakistan. Despite the 1999 Kargil War, the Parliament attack two years later and other provocations from across India’s western border, then prime minister A.B. Vajpayee did not opt for an attack on Pakistan, she noted. “War is no solution,” she said, and sought opening border routes and making J&K as Central Asia’s economic corridor.

That is one point about which Mirwaiz is clearer. The border state, he believes, can become the gateway for India to be part of China-Pakistan Economic Corridor. Fresh noises from Republican Trump, whose poll victory was announced on November 8, will be “interesting for our region”, he says.

If Not A Kiss, A Bear Hug