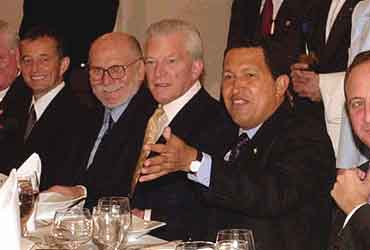 outlookindia.com
-0001-11-30T00:00:00+0553
In Argentina, they remember him with dread for pushing a debt-swap deal two years ago that analysts say caused both the economy and the government to collapse. Let's hope his tenure in India is more salutary. David C. Mulford, a controversial financial dealmaker, is getting in gear to serve as the next US ambassador with a brief to promote the American economic agenda. He won't sleep on the job. Back in college, they call him the 'Rockford Rocket' after his Illinois hometown and his speed on the football field.

President George Bush nominated Mulford, an old Republican loyalist, after a quiet search and consultations with his father. The White House sent the formal agre'ment to the Indian government about three weeks ago, officials said, adding that once New Delhi gave its nod, the US Senate would begin the confirmation process. Until last week, Mulford was the London-based chairman of Credit Suisse First Boston International, flying around world capitals persuading reluctant bureaucrats to wake up and smell globalisation. Hard-boiled and silver-haired, Mulford is of the traditional school where connections and friendships count for everything—like when old chums suddenly find themselves as finance ministers of large countries.

India can expect some give-and-take from this quintessential action man, said to be "formidable and blunt-spoken". As ambassador, he may prod India on trade issues while trying to sort out the Cancun undercurrents. A PhD from Oxford and author of two books on Africa, the ambassador-designate has been on top of the financial world for nearly 30 years. He served both Ronald Reagan and George Bush Sr as under-secretary of the treasury (1984-92), running policy for nearly a decade. He was the architect and executor of the famous Brady Plan—a gigantic undertaking involving debt relief, restructuring and conversion of loans into bonds for Latin American countries. The plan, named after his boss and treasury secretary Nicholas Brady, should have rightfully been called the Mulford Plan. In fact, Brady used to joke that if it failed, he would call it precisely that.

Mulford is a member of the old boys' network, close to the circle of the hyper power elite that surrounds the likes of Henry Kissinger, the Bush men, James Baker and Frank Carlucci. The "revolving door" between corporate high office and political power opens smoothly for them as they glide around accumulating influence. And in his 60-odd years, Mulford has worked near many centres of power. He replaces Robert D. Blackwill, who left New Delhi this summer to join the National Security Council, having successfully created a buzz about India in Washington. But economic matters didn't engage him as much even with the US business lobby breathing down his neck.

"Blackwill's time was dominated by strategic issues which at the end of the day are symbolic and emotive. But later he became a friend of the business community," says an official involved with Indo-US business. "The substance of the relationship will be in economic issues. There is a bit of a rethink going on with a sense that ambassadors tend to get 'captured' by India." Mulford is expected to continue the courtship but with a firm eye. One only hopes he won't try to do an Argentina on India.

Mulford's record has been tarnished by a questionable deal he pushed on Argentina in 2001 when the country was already in the throes of a financial haemorrhage, having defaulted on its $141 billion debt. The debt had mounted thanks to the self-serving advice from Wall Street bankers who had egged the government on a bond-issuing spree, according to Charles Calomiris, professor of finance at Columbia University. Argentina was hurtling towards disaster, unable to pay the high interest demanded by banks like Credit Suisse and Morgan Stanley for underwriting those government bonds.

Enter Mulford with a deal of his lifetime involving seven banks, a plan that required 60 experts and $125 million in fees simply to draft it. He met Argentina's economy minister Domingo Cavallo, an old friend from his treasury days, within hours of the latter assuming office in March 2001. Mulford convinced Cavallo to do a "debt swap" whereby bondholders would voluntarily exchange old bonds for new and postpone interest payments, thus temporarily averting the crisis. Despite warnings from Calomiris and the imf, Cavallo heeded Mulford, digging Argentina into a deeper hole. Mulford's predictions of growth lay like many cinders on a burning capital. The investment banks had made off, cutting extra-judicial deals and fixing bond prices for better profits, according to court papers. By November, protests had forced resignations of both President Fernando de la Rua and Cavallo and judicial investigations against the seven banks. Argentina had cried again.

Undeterred, Mulford this summer was offering solutions for the $100-billion Iraqi debt, saying it should be forgiven rather than rescheduled as France, Germany and Russia want. He argued that the Iraqi economy couldn't bear the burden of reconstruction and high debt payments. Why should the Iraqi people pay for Ba'athist sins, he asked in a Financial Times opinion piece. Such tenderness for the Iraqis is noteworthy but, as always, there might be more going on. In the absence of international generosity for the US enterprise in Iraq, every dollar counts as Americans begin to ask questions about the war. Mulford's ideas may help save money for reconstruction but the biggest projects are in the hands of select US companies connected to the same power circle.

Mulford thrives on fixing and solving problems, using his charm and toughness in equal measure. Those who dealt with him at the imf in the '80s remember him as a "bull-in-a-china-shop" personality. One former imf official described him as "not a man of vision but very much a man of action". But Calomiris, who has disagreed with Mulford, says his appointment as ambassador is a far-sighted move. "India is one of the most crucial countries today. To send a man with practical knowledge of the financial world is good because if India and China successfully globalise, the whole world will successfully globalise," he says. About Mulford's Argentine albatross, the good professor astutely comments: "He has done some of the toughest, most complex transactions in the world. The world of finance is messy and when it intersects with the political, it gets messier. You have to break the egg to make mayonnaise."

On the other hand, political observers who measure the cross-currents in Washington note the timing of Mulford's appointment as "interesting". It is well known that Credit Suisse of late has taken a terrible pasting on all fronts—financial, legal and public relations—for its alleged role in the American corporate scandals. The head of its technology unit, Frank Quattrone, is on trial for destroying evidence after the bank came under the radar two years ago for taking kickbacks from preferred clients. Even though Mulford has not been connected to the scams in any way, Credit Suisse was no longer a good office address to have. Coincidentally, Mulford raised his political donations to the Republican Party around the time Credit Suisse was getting a bad name. Going from a paltry average of $5,000 a year in the 1990s, he turned generous in the new millennium, donating a total of $182,000 to the party, according to the Center for Responsive Politics. He and his wife Jeannie are among the top political donors with a tangible return on philanthropy.

"He is polished. Certainly, compared to a lot of others who give money to be ambassadors, he is extremely well-placed to be in the job," comments a veteran Washington Post writer.In his long career, several countries have showered awards on him, including France and Poland. Argentina too gave him a medal but that was eight years before he gave them his final advice.