Personages from across the spectrum tell Outlook about the books in 2012 that helped pass time, or enriched its passage 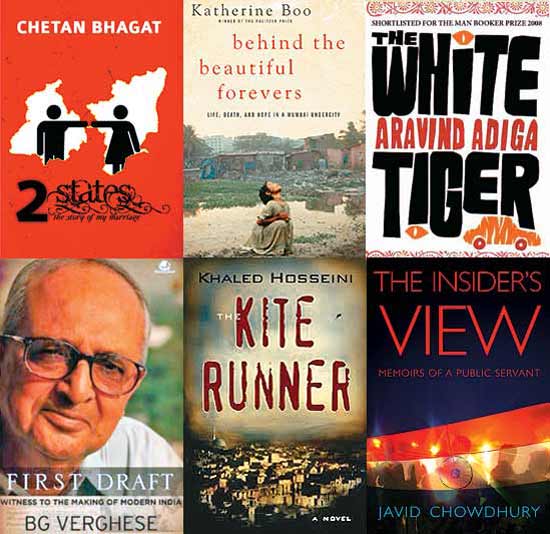 “It is always difficult to categorise the best book because there are many good books that you read throughout the year. But the book that impressed me most this year was Confluences, jointly written by Ranjit Hoskote and Ilija Trojanow. It’s a brilliant analysis of connected histories and how different cultures, through confluences, connect us.”

“I enjoyed Alvin Toffler’s novels—Second Wave, Third Wave and Future Shock. I share his belief that ‘tomorrow’s illiterate will not be the man who can’t read; he will be the man who has not learned how to learn’. An extremely interesting book this year is the Urdu translation of the the late deputy chief minister K.V. Ranga Reddy’s biography, by Razaq Farooqi. A line from this that so eloquently signifies our struggle for Telangana: ‘Ghulami ki zindagi se maut achhi hai’. A piece of fiction I am reading is the Srikrishna Committee report.”

“I would probably have to say Katherine Boo’s Behind the Beautiful Forevers. It is a fascinating story of the drive and resiliency of people in the new India, particularly to ensure that their children have an education. It also offers insights into the challenges into implementing reforms at the grassroots level and ensuring that the justice system delivers.”

“I read many interesting books, but would single out as my favourite James C. Scott’s Two Cheers for Anarchism. It almost speaks to what is going on in the city of Delhi now. It is a refreshing take on the complexities of change.”

“The book that I liked reading the most this year was Valmiki’s Ramayana. I was given a German translation of the epic and loved it. Despite cultural difference, the powerful images, the commitment of the characters and the beautiful story-telling kept me mesmerised throughout.”

“I’ve managed to complete one book this year, The King of the World by David Remnick. My friend (filmmaker) Rohan Sippy gave it to me on my birthday since he knows I’m a huge fan of Mohammed Ali. Currently I’m reading Adventures of the Screen Trade by William Goldman, a book Aamir (Khan) asked me to read.”

The tennis player who will be publishing her own autobiography this year, Against All Odds, says she enjoyed 2 States: The Story of My Marriage by Chetan Bhagat and The Gift by Marcel Mauss. She particularly enjoyed Khaled Hosseini’s descriptive narratives in the best-selling A Thousand Splendid Suns and Kite Runner this year.

“Andrea Levy’s The Fruit of the Orange is a tale of immigra tion that has parallels with Bengal’s struggles. Kazuo Ishiguro’s The Artist of the Floating World and A Pale View of Hills are about post-war Japan, and are fascinating. Julian Barnes’s Arthur & George is also enjoyable. Tapan Raychaudhuri’s The World In Our Times is a must-read memoir by a great historian.”

“Two books that really impressed me this year were The Same Sea by the Israeli writer Amos Oz and the Malayalam translation of  The Children are Free: Re-examining the Biblical evidence on Same-sex relationships by Jeff Miner and John Tyler Connoley. Though an old novel, I read The Same Sea this year and enjoyed it thoroughly.”

“I read this really nice book by Colm Toibin, Love in a Dark Time. It’s a series of articles, almost biographical, on gay men and women, from Oscar Wilde to Pedro Almodovar.”

“I was overwhelmed by Aravind Adiga’s White Tiger, with its artistry in pacing  the narrative, and his searing portrayal of class conflicts and class turmoil. I paused several times to ponder over the book’s social significance.”

“Interestingly, I read many authors from Pakistan, Bangladesh and Iran. The book that I enjoyed most was Reading Lolita in Tehran, by Azar Nafisi. It provides deep insight into artists’ and women’s lives in Iran and their constant fight for a voice. As an artist in a society where increasingly you are told that literature means Chetan Bhagat and cinema is Bollywood, it almost reassures you that authorities are scared about the power of the artist, while refusing to acknowledge power in art. It is poignant how reading a certain book is seen as an act of defiance in Islamic Iran, how intellectuals struggle to work within the system, yet keep the fire of alternative progressive thought burning in their students.”

“The book that struck me most was Keith Richards’ autobiography ‘LIFE’. Lacking in serious literary ambitions, it nevertheless gave me an unobstrusive insight into one of the most hardcore human beings alive. I loved the tone and the stories, and though I am not into biographies too much, the sheer audacity of the scenarios made up for it. Jeet Thayil’s ‘Narcopolis’ also moved me a lot, with its depiction of decadence and its opium-fuelled wordplay.”

“I read Crunch Point—The 21 Secrets to Succeeding When It Matters Most by Brian Tracy, about how people can survive stressful situations, thrive, and come out winners.”

“I enjoyed Amitav Ghosh’s River of Smoke. It attracted me as Ghosh writes about trade relationships between countries, and he positions his landscape and his characters within this frame.”

For me, the ‘Book of the Year’ has undoubtedly been Javid Chowdhury’s The Insider’s View: Memoirs of a Public Servant (Penguin/Viking, 2012). Javid was at school and college with me and joined the IAS a year later. In this lucid, unpretentious, and beautifully written autobiography, he sums up the moral ethos of the midnight’s children who decided to become civil servants for a pittance in comparison to jobs in the tea gardens, or in the great mercantile houses of Calcutta. It was a generation caught in the first enthusiastic flush of Independence, and which then grew disillusioned with the erosion of values as the economy moved from self-reliance to Reliance. His story is strewn with delightful vignettes, such as Babubhai Patel, the CM of Gujarat, who lived in the district where Javid was posted as collector, arriving from Ahmedabad by bus and on seeing the Collector, all trussed up in the mid-summer heat in a bandgala, gently enquiring why he was taking the trouble to receive him when all he, the CM, was doing was ‘going home’. Later, as head of the Enforcement Directorate just as the era of economic reforms was taking off, he recounts with sadness the collaboration between state actors and business houses. He had retired before Modi was unleashed on Gujarat and, as a Muslim who had not experienced any discrimination in school, college, or the service, bemoans the collapse of secularism as the leitmotif of governance in the state he loved and served with such dedication.

Madanjeet Singh’s Culture of the Sepulchre (Penguin/Viking, 2012) is a blood-curdling account of the brutal genocide perpetrated on his own people by that crazed dictator, Idi Amin, to whose government Madanjeet was accredited as India’s ambassador in Kampala. What shines through the story is Singh’s courage in doing his first duty, the protection of the Indian community in Uganda, scattered from the capital to the bush.

Of enduring significance is Paul Fussell’s The Great War and Modern Memory (OUP, 1975), detailing, with impeccable scholarship, the immense raft of literature generated during and in the aftermath of the wwi, ranging from Wilfred Owen, Siegfried Sassoon and Robert Graves through Eliot, Isherwood and Yeats, to letters home from Tommies in trenches, often before they went ‘over the top’. Fussell shows how the war brought on the disillusioned, ironic modern sensibility, and the end of the Whig illusion that Europe was the byword of human progress.

For the most profound spiritual experience that an agnostic rationalist like me can have, nothing could beat Khushwant Singh’s A Freethinker’s Prayer Book (Aleph, 2012), an astonishing anthology of non-denominational verses from all the great religions.

And for dessert, nothing compares with Lizzie Collingham’s Curry: A Biography (Chatto & Windus, 2005), an epicurean journey which brings alive 18th and 19th century colonial India as sahibs and memsahibs arrived in swollen numbers and started fusing the Indian food they encountered with the remembered ‘home’ cooking to the point where Indian ‘curry’ is now a British staple. The recipes are mouth-watering but, alas, vanishing from the dak bungalows of the Raj (but try the Railway Mutton Curry at the Brunton Boatyard, Kochi).