Minority Government Is No Problem

'As long as it is a duly constituted government, we can sign a deal with it' 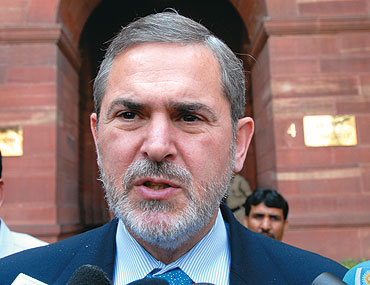 Last week, Indian foreign minister Pranab Mukherjee told Outlook it was not possible for a minority government to sign a major deal. To seek Washington's response to this, we interviewed the assistant secretary of state for South and Central Asian affairs, Richard Boucher, who has invested considerable time and energy in the Indo-US civilian nuclear agreement. In a conversation with Ashish Kumar Sen, Boucher expressed opinions quite different from Pranab Mukherjee's. Excerpts:

In a recent interview to Outlook, foreign minister Pranab Mukherjee said a minority government couldn't possibly sign a major deal. What do you think?

I didn't see the minister during my trip and I haven't seen his interview. I really cannot address the words and things that he said. Our basic government position is that we can sign an agreement with a duly constituted government, whatever its political status.

Is a deal signed by a minority government acceptable to the Bush administration?

As long as it is a duly constituted government of the country, we can sign a deal with it.

Do you make a distinction between a minority government and a caretaker one?

Did Indian officials discuss the scenarios of the deal being signed with a minority government versus a caretaker one?

I don't remember it coming up at all during my meetings with Indian officials. 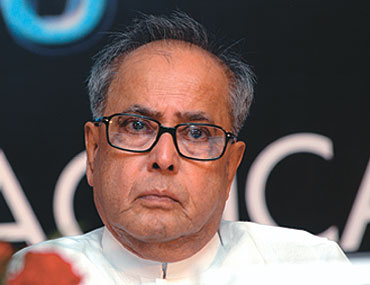 In the interview, Pranab Mukherjee said, "A minority government cannot, need not and should not sign a major agreement like this (nuclear deal)." Was this sentiment conveyed to you during your meetings in New Delhi?

Well, that's a different thing. That's a political judgement that the foreign minister, in his political role, is going to make. That's not a matter of precedent. We understand that there is a political process in India. These are two democracies working with each other. And we have to understand and accept each other's political processes. But we are not involved in that and will leave it to the Indian side to work on.

Are you concerned that the Left could kill the nuclear deal?

No. One of the things we have tried to do is not to set deadlines but to make people aware of our timelines; make people aware that we also have a process going on here. Everybody knows that we have an election coming up (in November). That means we have to get this arrangement to our Congress before the summer as Senator (Joseph) Biden said when he was (in India). And if you start working back from there, then we have a lot of things to do and not a lot of time.

This is a very good deal for India and a very good deal for the United States. It will provide clean nuclear power for India's economic development. We want to support that. As both of us look at doing this very important deal, making this very important progress in our relationship on nuclear power, we also need to keep in mind each other's democratic processes and the timelines.

But don't you find it frustrating that the Left is creating obstacles to the deal?

I don't think we should find either of the democratic processes frustrating because, in the end, it is a source of great strength for us. We need to work within the process to achieve our goals.

Have delays in India made it more difficult for the US to convince members of the Nuclear Suppliers Group (NSG) to support this agreement?

I don't know if it has made it more difficult to win support, it just gives us less time to work in. And each of these groups—the International Atomic Energy Agency, the NSG, our Congress—have established procedures. And we have to try to fit meetings within those procedures because that eliminates a few more objections or questions that can be raised. We can still make this happen if we work together and if other people within these organisations work with us, but the more time you have the more you can meet the schedules that these groups normally have to ensure success.

What's the final deadline if this agreement is to be wrapped up by the Bush administration?

Again, I'm not into giving deadlines. The timeline that we got from Congress is that it has to act on it by July. That means it has to get to Congress in June.

Former under secretary of state for political affairs Nicholas Burns recently noted that China would support the deal at the NSG. Has China guaranteed such support?

We are hopeful. I don't want to try to speak for the Chinese. I don't think I can say it's locked in. But I think we are hopeful that all countries will support it because it is actually a way for providing nuclear power. That's a good thing for everyone.

Do you believe China's support for the deal will help allay some concerns of the Left in India?

I do diplomacy, not politics. I will seek their support at the NSG. That's something we will work on. But I'm not looking for it in political terms; I am looking for it in diplomatic terms. As far as how vocal the Chinese want to be, that's up to them. We will be talking to them about these issues and they have a great interest in it. But as I said, this is a good arrangement for nuclear power and we can work with countries like China.

Do you believe it is realistic, considering we are now midway through March, that the Indian government can do what is required within the timelines you just mentioned?

We have to see how the process works in India and then take it from there. As the Indian government is ready to go forward, our job, together with the Indian diplomats, is to try to make this happen at the various groupings. At the same time, we need to make people aware that time is very, very tight and that we have to get it through these groupings. We are going to work hard. We are going to have to give ourselves the right amount of time to really succeed.

Was there an appreciation in New Delhi that time is of the essence?

I tried to give people the sense that time is of the essence. We are on very, very tight timelines here. There are a lot of things to do. We are going to try to see if we can get the agreement to work in this time.

Critics in the US want the administration to make public its replies on the nuclear deal to the set of questions from Congress. Is this something you will consider?

What happens to the deal if it is not wrapped up by the end of the Bush administration?

I think the answer is, I don't know. I don't think any of us really want to throw it into that unknown limbo. Our goal should be to get it done, because it will be fixed, it will be done. Because anything beyond this administration is speculative—what the next administration might do, what its status might be. Certainly, I don't think anybody will throw away everything that we have done, but they might also try to take a different approach to finishing it. Whether that would work or not work, we just don't know. I don't think any of us want that uncertainty.

It's a good deal, a good agreement for the Americans and the Indian people. In terms of turning on the lights for kids to do homework, I think we ought to just go ahead with it.

Can you tell us a bit about the effort invested in this deal by the Bush administration?

You are aware of the negotiations, back-and-forth trips, the time under secretary Burns, Shyam Saran as special envoy and the foreign secretary and cabinet members have spent on this. This is a healthy investment, it is a good investment, but it is part of a really enormous investment from the president on down in developing our relationship with India.

The N-deal has dominated US-India relations since July 2005. In hindsight, was it a mistake to make this the centrepiece of the relationship?

I think it is a very important piece, but the relationship does not live or die with the nuclear deal. That said, this is an enormous opportunity to provide clean power for Indians, and enormous opportunity to turn on the lights in places in India where they need power for kids to do their homework. We want to do that and bring India alongside into a compatible position with the international non-proliferation effort.

Those are really opportunities that need to be taken advantage of. The more quickly we can do that the better it is for all of us. I'm very much a fan of this, I feel it is a good thing to do and it is important for our relationship. We'd like to see a very strong relationship with India, we want to pursue that relationship across the board.

Should the deal not be concluded, what repercussions will it have on the US-India relationship?

Frankly, that's purely speculative. My job is not to focus on what happens if it does not work, but how do I make it happen. If it doesn't happen, that will obviously raise a lot of questions about what is going to happen to this agreement and how the new administration will be in a position to deal with India. And you can speculate any way you want on that, but the one thing that is good is that there is very solid bipartisan support in the United States Congress over having a strong relationship with India. But how they will go about that, I don't know. But, frankly, I want to get this thing pinned down and done now than just say who knows what will happen.