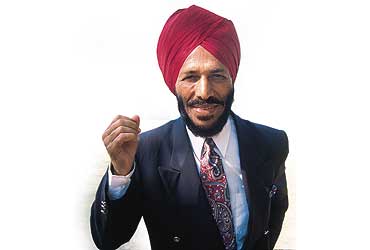 The Flying Sikh lost only three of the 80 races he ran. But then, all that Milkha Singh, a refugee from Muzaffargarh in Pakistan who lost both his parents in the Partition massacres, ever wanted was to run. He ran up hills, he ran on sand, he tested his speed against trains. And he grew to be the greatest athlete India has ever produced, the only Indian to have ever held a world record. He clocked a world record 45.8 seconds in 400 metres in the run-ups to the Rome Olympics in 1960, and was the favourite for the gold. At Rome, he broke the Olympic record in the 400m, but unfortunately was only one among the four athletes in that race who did the same. The entire nation's hopes were dashed when he missed the bronze medal by the fraction of a second in a photo-finish. Indeed, it's certain that he would have won a medal in the 200m race, but with the race schedule clashing with the 400m, he chose to run the latter race. Still, Milkha Singh won enough medals and set enough records in national meets, the Asian Games and Commonwealth Games to prove his dominion over the world of speed. That was Milkha Singh as an athlete. And as a human being, he donated all his sporting trophies to the nation, and adopted the little son of a Kargil war martyr.