Bang-on on some assessments of allied governance, simplistic in certain others 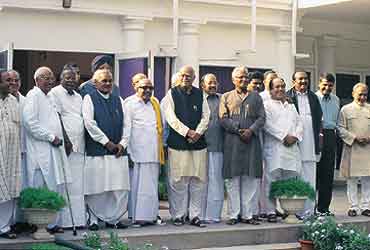 A Time Of Coalitions: Divided We Stand
By Paranjoy Guha Thakurta By Shankar Raghuraman
Sage Rs 350; Pages: 416
As India gets ready for its second coalition government in succession at the Centre, there will no doubt be renewed speculation as to whether the country can really be said to have entered the coalition era. If an element of doubt still remains, it is presumably because of a lingering feeling that India is passing through a transitional phase and it will be premature to come to any definite conclusions. The country has known single-party rule for so long that it still seems unwilling to accept that coalitions have become the natural mode of governance in the foreseeable future.

However, although India has never experienced this kind of politics at the national level, it has been a feature of state politics for quite some time, notably in Kerala and West Bengal, where coalitions have been functioning for a quarter of a century or more. At the Centre, however, experiments of this nature haven’t been happy ones. The first was in 1977, after the trauma of the Emergency, when the Janata Party, a coalition in all but name of the Congress(O), Jana Sangh, Lok Dal and socialists, came to power, with Jagjivan Ram’s Congress for Democracy supporting it from outside. It collapsed within two years. Since then, there have been several other such disasters, the most recent of which involved the H.D. Deve Gowda and I.K. Gujral governments in the mid-’90s.

In contrast, the Vajpayee government has been a success since it has managed to remain in power for virtually its entire term, a feat not achieved by any other non-Congress formation. This book, therefore, is timely. The authors are right in believing that coalitions do not point to a "nightmarish scenario". On the contrary, they say that the realisation may have dawned that "coalitions... are perhaps better equipped to deal with the tensions of...a divided society than single-party governance."

If anything has proved this assertion to be right, it is the tragedy of 2002 in Gujarat, which represented—and still does—a "nightmarish" experience for the minorities. And Gujarat is ruled by a single party. That doesn’t mean, of course, that parties in future will not try to get a majority on their own. After all, that is the objective of every party in a democracy. For the present, however, no single party seems capable of achieving this feat. Hence, the contention of the authors that India has entered an era of coalitions. What is not clear is why they insist that this development will not lead to two major parties forming the focal points of two rival coalitions, with a number of parties clustering around them.

Yet, this is exactly what seems to be happening. After failing to lure others to its side during the 13 days of the Vajpayee government in 1996, the BJP decided to drop the contentious points of its agenda and become the core of such a cluster. The Congress was slow to appreciate this, but its defeats in Madhya Pradesh, Chhattisgarh and Rajasthan have led it to align with others.

But the authors believe that two rival coalitions may not emerge since the "process of fragmentation is not yet over. This, in turn, could throw up unexpected possibilities...including the formation of new political parties". There is a grain of truth in this assessment. It is not beyond the realms of possibility that the BJP will split if Vajpayee’s Pakistan gambit proves to be a success, with the vhp and other saffron hardliners forming a new party. Even then, the most likely scenario still is that there will be two major coalitions, one led by the BJP and the other by the Congress, along with other parties on the fringe.

A disappointing aspect of the book is its assessment of the BJP and the Congress, which is a rehash of known facts without any new insights. Similarly, the authors’ recital of events in various states and their pen portraits of leading political personalities. In targeting the average reader, the book runs the risk of being too simplistic.

Then, there are certain assessments which can strain credulity. For instance, the authors’ belief that the Left’s policy on coalitions is not based on an acceptance of the "evil" of a fragmented society, but is a strategic move related to the prospect of ushering in a people’s democracy is far-fetched. Surely, few communists still nurture that utopian concept. Similarly, the description of the Congress as "inclusive" is a concession to the party’s original theories, which are honoured more in the breach at present.