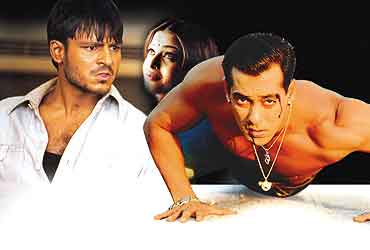 "Have you grown up to Thums Up yet?"
—Salman Khan in the cola ad

In a world where it's rumoured that women go for the mind, Salman Khan should have been celibate. But he has consistently found mates who can't be dismissed as misled girls chasing his money, yearning for his barren chest. They are all famous, successful, beautiful women. When they eventually toured his mind, it was a short journey. That's more or less the story of how recent casualty and ex-Miss World Aishwarya Rai bade him goodbye. Romeo's reactions to the lady's belated good sense—including a promise to punch the nose of Vivek Oberoi whom he suspected to be his unworthy replacement—fit perfectly in a life filled with lawfully punishable behaviour. If Salman was a woman, he would have been kindly called a victim—suffering from loneliness, despair and what Mahesh Bhatt calls "drug and alcohol-induced schizophrenia". If only he was. But he's an attempt at a robust male, variously regarded in the industry as a moron, a bad driver and "a good person".

The uncharitable say the publicity...