A three-pronged spear as Hindutva symbol. Tell it to the Greeks. 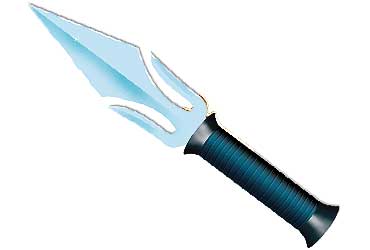 outlookindia.com
-0001-11-30T00:00:00+0553
The next time Praveen Togadia hands out his trishuls, he should stop to read a little history. Shiva's mythological weapon that the Vishwa Hindu Parishad leader claims as part of his legitimate Hindu heritage was better known in Greek and Roman myths than in India.

Vedic Indians had never heard of it. The closest they came to the now familiar Hindutva symbol was the shula (sharp-edged spear) which they used as a barbecue rod to roast meat. It was not until 2,000 years after the trident flourished as a popular symbol in Greek and Roman mythology—from Homer's Trojan warriors to Zeus' trident thunderbolt to his sharp-tongued sister (and wife) Hera's iron staff to the Greco-Roman sea gods Poseidon and Neptune—that it makes its first appearance in the Mahabharata. And it was not until around 800 years ago that the trishul became a part and parcel of Hindu imagery. "It is wrong to equate the trishul with Hinduism," points out historian D.N. Jha. "The first trishuls to appear in Indian art are in the hands of Buddhist gods like Hariti or in Buddhist and Jain temples in Sanchi and Udaigiri. In the earliest known Shiva sculptures such as the one in Gudimallam in Andhra Pradesh, Shiva appears with an axe, not a trishul."

The trishul, Jha says, is being appropriated by political Hinduism the same way it claimed the cow as a holy symbol in the 19th century to counter British aggression. Togadia, though, is hardly the first Hindu leader to discover the weapon's religious evocativeness. In the medieval era, when temples began to create warrior-ascetics to protect themselves from Muslim invaders, they were armed with trishuls. Some historians, like David Lorenzen from El Colegio De Mexico, believe the Dasnami Naga sadhus with their trishuls are remnants of this temple militia.

In Khajuraho, in a late 10th century sculpture, the trishul can be seen held by a figure combining Shiva and Agni, the fire god. But in South India it only begins to surface in Shiva's hands in the temple art of the 16th and 17th centuries in the Virabhadra temple in Lepakshi, for instance, or the Chidambaram temple in Tamil Nadu. It was in fact calendar art printed in Germany in the late 19th century that turned Shiva's mythical weapon into the best-known Hindu symbol. For these hack painters of lurid religious pictures, a trishul was as indispensable to Shiva's depiction as the cobra coiled around his blue-black neck, the tiger skin around his waist and the Ganga flowing in a neat arc from his topknot.

Exactly how inspired the VHP is by calendar art is evident in their office in Delhi. Nearly every inch of wallspace in the three-storeyed building—even along the stairwells—is plastered with the popular religious prints. Sitting under a 4ft-long print of the multi-headed, multi-armed display of Krishna's divine splendour, joint general secretary Balkrishna Naik and Swami Vigyananand (coordinator for Asia-Pacific zone) strenuously deny that the inspiration for the VHP's trishul comes from calendar art. "The real trishul is not curved on both sides but three-pointed as the word trishula (three-pointed) implies."

Nor are they fazed by the fact that it first flourished in ancient Greece and Rome. "That's the glory of our tradition," says Naik. "Hinduism has survived because of its dynamism, its ability to adopt from everywhere and then make it its own."

The VHP's trishul shows some of this adaptability. Apart from sharpening the three prongs—made of stainless steel instead of the traditional iron—the blades are made to measure less than nine inches to evade the Arms Act. The long spear handle has been replaced by a black plastic one, like a modern kitchen knife. "This is a handier model," explains Swami Vigyananand, an ex-iit engineer."It slips conveniently into a pocket we have tailored in the plastic sash that Bajrang Dal workers wear." The designer trishul works in two ways, according to the VHP leaders: "It attracts more of the youth to enrol in the Bajrang Dal, and it's a great morale-booster."

As a weapon, they claim it's useless. "We sometimes laugh that you can't even cut vegetables with it," says the thirtysomething swami. But as a symbol, it's unbeatable. "Apart from being Shiva's weapon, you can explain it as the three gunas in human nature, or in the words of Ramakrishna, 'the sharp thorn to dig out a thorn in the flesh'; a symbol of standing up to the onslaught of evil forces from within and without." But why the trishul? "Because that's the only Hindu symbol that is practical for modern times," explains the swami. "You can't expect today's youth to go around with bows and arrows or a sudarshan chakra. They wouldn't know what to do with it or how to carry it."

The VHP's creativity is not limited to reinventing the trishul. It extends to coining a brand new Hindu ritual, the "trishul diksha". Historians say there is no such thing in Hindu scriptures. The weapons that Shiva gave Parasuram, for instance, is not a gift but a sacred initiation. "The astra (weapon) diksha is like an investiture ceremony," explains Jha, similar to the thread ceremony. "The trishul is not a toy to gift." Agrees Hindu social activist Swami Agnivesh: "The trishul diksha doesn't exist. It's all metaphorical—diksha, trishul, even Shiva. These aren't real, they are only metaphors. But now we see people trying to breathe life into these metaphors. Shiva's trishul was only a symbol but these trishuls are sharp-edged knives that can carve out a man's innards."

What is extraordinary about the way the VHP has appropriated the trishul, according to Jha, is the blurring of lines between ascetics and householders. "Till ten years ago, even five years ago, the trishul was associated with militant sadhus. It's a symbol of renunciation, not to be worshipped in homes."

But Swami Vigyananand feels the times demand a crossing of the lines. "Those days when the trishul was seen only in the hands of sanyasis were different. The masses didn't have to be involved in their own defence. But today you have terrorists armed with AK-47s, with bombs and rocket-launchers. Who will protect the masses? Not the police or the army, they are unfit for it. The trishul sends a message that we should stand and fight. You can't kill with the trishul but symbols and ideas are interconnected by the law of association. When the mind gets ready, everything is possible."

Perhaps Swami Vigyananand could do with a lesson or two from history too. He'll find that religious militants prosper most in uncertain times like these, and that they peter out under strong efficient governments.