An IPS officer's crusade: to revive the state's lost pride 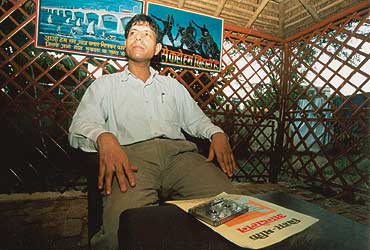 outlookindia.com
-0001-11-30T00:00:00+0553
Garv se kaho hum Bihari hain" (say with pride we are Bihari) is the slogan; "Biharis of the world unite" is the call and "revival of Bihari pride", in each and every Bihari heart, is the motto. With this slogan, call and motto, the Bihar Bhakti Andolan (BBA) was launched recently without any fanfare but with the support of many from within and outside the state. The man and brain behind the 'movement' is Arvind Pandey, who, incidentally, is not a Bihari. Yet, sometime back when a popular Bhojpuri folk singer, Anand Mohan, released his audio cassette Bihar Nahi Sudhri (Bihar is incorrigible), Pandey sang songs in praise of Bihar in his cassette produced by Venus to counter the T-series product.

This 42-year-old IPS officer, currently posted as Commandant of the Bihar Military Police (BMP), originally belongs to UP. He's been serving Bihar for the last one-and-a-half decades, and desires to dedicate his life for the revival of that spirit which made Bihar "so great that even Alexander did not dare to attack". Says he: "Our forum is open to all Biharis irrespective of their creed and colour, political affiliation and social binding."

The BBA may be a small venture, but its aims are lofty. Pandey and his associates have announced a seminar to be held next month, inviting industrialists, entrepreneurs and nris. "Bihar was a land of peace and prosperity and it is still so," he says, countering the allegations of law and order problems, rampant kidnapping and unabated killings. "Mumbai is shivering with a series of explosions, top officials are abducted and killed in Andhra, Veerappan is running a jungle raj in the south, Gujarat is experiencing deep communal divide. Yet, economic activities are going on in those states and nobody ever talks of packing up," asserts Pandey.

Aslam Parvez, a New York-based doctor who joined the group, says he was impressed with Pandey's sincerity. The group feels Bihar has earned a bad image chiefly because of bad propaganda. Politicians and the state bureaucracy, it says, are responsible for this. "Politicians of other states do not abuse their states, not even Karunanidhi after being manhandled and humiliated at the hands of Jayalalitha. But our politicians do," says the IPS officer, who has got inconsequential postings under the present regime. Nikhil Kumar, another retired IPS man and Delhi's former police commissioner, stresses the need to break free from the present morass and build a Bihari subnationalism.

Pandey is not alone in his endeavour. The Asian Development Research Institute (ADRI), a Patna-based ngo, is trying to bring all politicians, social workers and groups under one umbrella in the name of the identity and development of the state. "Biharis are the worst critics of Bihar," rues ADRI member secretary Shaibal Gupta, "they lack a feeling of ownership." ADRI has organised many seminars and meetings without any political or ideological frills to find solutions for the backwardness of the state and the state government has listened. "Bihar has given enough to the world and the country. Now it is their turn to turn towards this benighted state," pleads Gupta.

The group laments that while Bharatanatyam, Kuchipudi and Rabindra Sangeet are well-known across the country, Bihari native song genres like chaita, bidesia, birha, kajari, sohar, nirgun, or dance forms like launda nach, jharni, sohrai, gond nach or the cuisines and snacks like litti, pitha, thekua, khaja, tilkut, anarsa and so on have never got the pride of place, even in Bihar. On the contrary, the sale of Maggi noodles in Patna is the second highest after Delhi.

Says Pandey: "Bihar supplies the largest number to the pool of IAS-IPS officials. Fifty per cent of all district magistrates and SPs in India have some Bihari link.Mathematician Vashisht Narayan Singh, who became insane, and Anand Kumar, the only Indian invited by the Mathematical Association of America to its global conference, are Biharis. So was war hero Abdul Hamid. Ustad Bismillah Khan hails from Buxar. Shatrughan Sinha, Manoj Bajpai and Shekhar Suman too wear their Bihari tag proudly."

Pandey's BBA now wants to prove that Bihar has something more to offer the world other than its history. That is the group's dream.

"No Point Making It An Election Issue"