Malkani shovels up some usual ghosts, with a couple of surprises 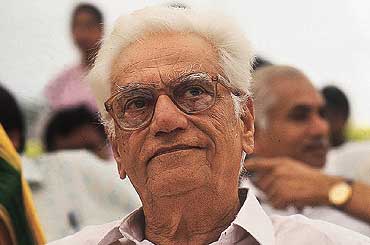 India First
By K.R. Malkani
Ocean Books Rs 300,Pages:235
In his foreword to this book, the Home Minister of India, L.K. Advani, an old friend of the author, presents K.R. Malkani as "very bold and unorthodox". There is nothing unorthodox in the articles of this compilation which deals with the need for India to "repatriate" the "Bangla Muslims" (sic) to their "native land" or with the swadeshi agenda: in tune with the general stand of the bjp’s hardliners. Some of the chapters, however, can be "bold" to the extent that they show the hidden face of Hindutva politics.

Let’s take the caste issue first. Malkani stops short of questioning the caste-based reservation system—the bjp gave up its attempts at supporting an alternative, revenue-based reservation system in the mid-’90s, lest it should lose the obc vote. But the author introduces a very interesting nuance in saying that the "real mischief here is not reservations but the politics of reservation". For sure! Reservations do not make much of a difference since the quotas are limited, except in the administration where they are never filled up. By contrast, the politics of reservation, the populist promises of expanding the reservations, enables parties to mobilise the lower castes and to "forge kham and ajgar and now majgar!—a gang-up of certain groupings to capture power". And they do capture power at the expense of upper castes-oriented parties like the bjp. Hence Malkani’s nostalgia for "the earlier Indian tendency (that) was ‘Sanskritisation’ in which every caste tried to rise higher (and respected the upper castes, the unattainable highest)". This is in harmony with Malkani’s vibrant plea in favour of Manu—for him "there is nothing in Manu to shock anybody".

Malkani reveals even more candidly the unspoken face of the Hindutva ideology vis-a-vis the Muslims. The starting point of his demonstration comes very late in the book and is summarised almost shamefully in one sentence only: the Muslim minority makes "the Hindu feel insecure". Not because of its links with the rest of the Islamic world: there is not even one word on this, but because the Hindus have not succeeded in absorbing the Muslims. The recurrent, obsessive leitmotif of the book, on this issue, is a call to the Muslims to "Hinduise" themselves. They can worship Allah in the private sphere and in the mosque, fine, but they cannot keep this identity in the public sphere where the only legitimate one is Hindu, simply because Indianness is equivalent to Hinduness: "The Indian Muslim should therefore relax, practice Islam and, for the rest, accept and enjoy Indian or Hindu culture as his very own. For truth to tell, all Indians are Hindu—by culture and nationality." Malkani even suggests that the saffron flag should "fl(y) on the Red Fort and (that) an appropriate verse from the Vedas (should be) adopted as National Anthem". What is at stake, however, is not only the character of the state: Malkani claims that he is not in favour of any theocracy; but he tries to explicitly promote a Hindu, ethnic form of nationalism. And as any ethnic nationalist, he refuses to make room for the Other’s culture: its very existence appears as posing a threat to the integrity of the nation.

Hence the dual character of Malkani’s nationalism: on the one hand he longs for assimilating the Muslims in a Hindu-dominated nation-state; on the other hand, he tries to resist them more efficiently by emulating them. Malkani candidly admits that the Hindu nationalist institution par excellence that is the Ganesh festival was reinterpreted by Tilak in a public and political perspective by imitating Moharram which "provided a convenient model". Since the Muslim Other refuses to become Hindu, Malkani believes that he can be emulated to be fought more efficiently, and this stand can result in physical building-up—how many Ganesh processions have prepared the ground for communal riots?—which can make the Muslim disappear in a more radical way. This imitation of the Other brings to my mind the way Golwalkar borrowed most of his understanding of nationalism from Western theoreticians. Malkani is similarly addicted to Western authors: Toynbee, Kingsley Davis, Amaury de Riencourt, Huntington, Voltaire, Romain Rolland, Malraux, Burke, Orwell, Thoreau... are cited repeatedly: Hindu nationalism is not a swadeshi product but is imported from elsewhere—at least, it seeks the recognition of the West.

The two things which are slightly more unorthodox in Malkani’s book are his views on Kashmir and China. On the former issue, he recommends a trifurcation of Jammu, Ladakh and Kashmir, which would allow the latter province to develop Kashmiri instead of Urdu and revive Kashmiriat in such a way that this trend would "checkmate the appeal and influence of Pakistan". However, this strengthening of community and regional feelings is recommended along with the abolition of Article 370 and of all special treatment because that leads to separatism. On China, surprisingly, Malkani shares the old Nehruvian approach that India and its large neighbour were among the only civilisations likely to balance Western imperialism and that they should join hands for the sake of the new nations: "To this end they have to help each other come up." Such a discourse is significantly different from the traditional Sinophobia of the Hindutva ideologues.

(Christophe Jaffrelot is the director of CERI, Paris.)