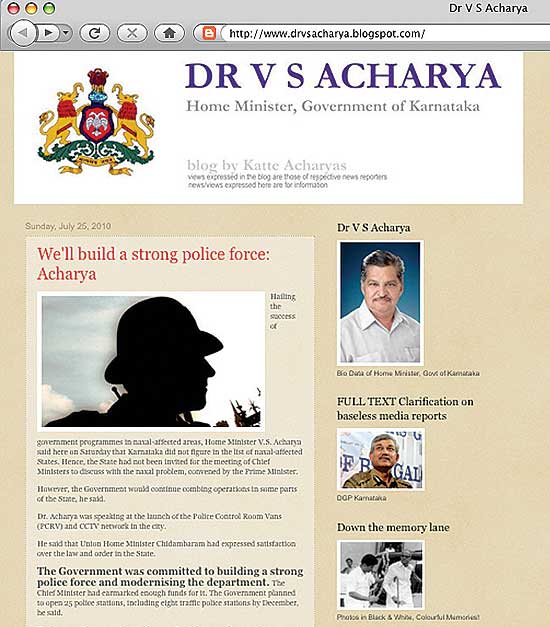 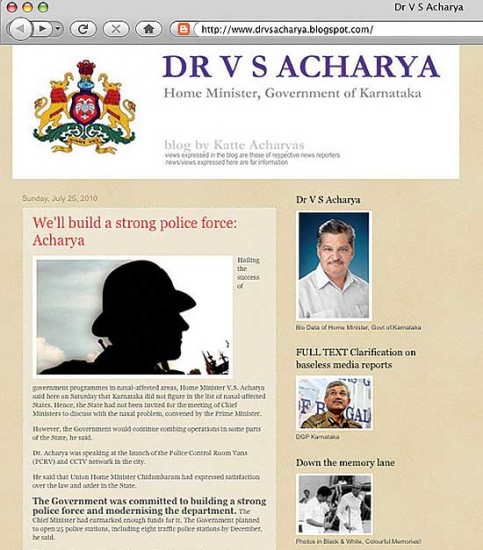 The “g-loggers” are here, a group of people holding high office in the Karnataka government while also maintaining blogs or writing columns in newspapers. That in itself wouldn’t have caused much of a stir if not for the fact they are also engaging readers on topics that sometimes have direct bearing on the positions they hold.

Home minister Dr V.S. Acharya and law and urban development minister S. Suresh Kumar both keep bilingual blogs; additional chief secretary in-charge of the energy department K. Jairaj writes a Tuesday column in a leading Kannada daily; Lokayukta Justice Santosh Hegde recently penned articles on his resignation and its withdrawal in a national magazine. He has also contributed to a Kannada weekly newspaper. Then, of course, there is the blogging judge, Justice D.V. Shylendrakumar of the Karnataka HC, who had used the medium to raise questions against his controversial boss, Chief Justice P.D. Dinakaran. Among the police brass, DGP (CID) Dr D.V. Guruprasad answers queries on the department in an English daily. He also writes ‘middles’ and has put the investigative agency on social networking sites like Facebook and Twitter. (Meanwhile, boss Dr Ajai Kumar Singh does research on mysticism and writes poetry.)

But let’s get back to our two ministers. Dr Acharya, who updates his blog almost everyday, prefers not to write but pastes news items and news pictures that interest him or are directly related to him. Sometimes there is a one-line introduction or a teasing question. In fact, his blog even carries a disclaimer which says that the “views expressed are those of respective news reporters”. However, it is not hard to find a pattern in the selection of his posts. It is from this point of view that Dr Acharya’s selections on the Mangalore church attacks or the Godhra riots and Teesta Setalvad’s interventions or on BJP ideologue Deendayal Upadhyay make for a curious read. In a February 4, ’09, post, there was even a rhetorical question posed to Outlook on a Mangalore pub attack picture published in the magazine. “I keep my blog mostly to clarify my point of view and rectify certain wrong points of view. Also, it helps me bring certain arguments back on track,” Acharya told the magazine.

Suresh Kumar’s latest blog entries betray his emotional as well as ideological make-up. One entry followed the unsavoury episode of the treasury and opposition benches coming to near-fisticuffs in the assembly on the issue of illegal mining: “I owe myself to RSS since my childhood days...I was in silent tears today when I had to hear the outcry of opposition members in both the houses abusing my party—gali gali mein shor hai...BJP chor hai. I never anticipated that in my life, my party will become a recipient of such epithets.... Yes, I am despaired.”

Meanwhile, there’s IAS man Jairaj, who has already begun recalling his service years in his columns. In the latest column on July 27, 2010 (his silver-jubilee piece), he speaks about how he went about the expansion of the Raichur thermal power plant as MD of the Karnataka Power Corporation, incidentally a public sector enterprise that he now oversees as head of the energy department.

Speaking to Outlook, Jairaj said there was no conflict between his columns and his current position: “I felt the need to communicate some of my extraordinary life experiences. There is no self-glorification in them. I assiduously avoid the present and chronicle the past. I also avoid mentioning my immediate colleagues.... For now, I am rather conservative and timid.” Jairaj says he has also set up a ‘study group’ of 20 friends to evaluate his column each week.

As g-loggers get active, one hopes that it will be deeds and not words that make this government.