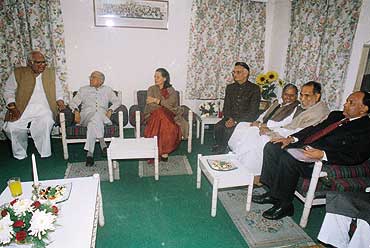 outlookindia.com
-0001-11-30T00:00:00+0553
CPI(M) leader Somnath Chatterjee, he of the gravelly baritone and heavy jowls, feared for his pugnacious wit and incisive interventions in the Lok Sabha, is nobody's idea of an ace mediator. Yet, in three one-to-one meetings with Congress president Sonia Gandhi, he pulled off the political coup of the year, bringing about a public rapprochement between Sonia and the man who had famously frustrated her bid for prime ministership, Samajwadi Party leader Mulayam Singh Yadav. Twice in a fortnight, Mulayam and Sonia were photographed hobnobbing together at social events, under the smiling aegis of the CPI(M) stalwart.

It all started with the veteran parliamentarian dropping in at Sonia's office in Parliament one evening during the monsoon session, to explain why he could not attend her tea-party for Opposition leaders scheduled for 5 pm that day. The following day's papers would report the tea-party as a flop with the Opposition cold-shouldering Sonia, but the pre-tea meeting was to have a long-term fallout. Impressed with his courtesy and gentleman-like attitude, Sonia invited Somnath-da to tea at 10, Janpath through deputy leader of the Opposition Shivraj Patil, a week before the winter session of Parliament. Their third meeting took place on November 18, the day before the session commenced, and it was then that the idea of forging Opposition unity was hatched. To be truly effective, it would have to be a visible, in-your-face entente.

A dinner was arranged, where Sonia and Mulayam cosied up to each other over hilsa and mustard. His follow-up luchi (Bengali puri) and dum-aloo breakfast meeting for Rajya Sabha MPs was less successful, with both leader of Opposition Manmohan Singh and deputy leader Pranab Mukherjee opting out. But that very evening, Sonia graced Mulayam Singh's glitzy iftar with her presence, signalling that the bad blood between them had flown down the Yamuna. Another meeting is on the cards, this time to be hosted by either the Congress or the SP.

A couple of years ago, the lynchpin of an Opposition alliance would have been the CPI(M)'s grand old man, H.K.S. Surjeet. For reasons of diminished health and credibility, he's no longer in a position to play the role and his mantle appears to have fallen on Somnath-da. Several factors make him uniquely suited to this role. For one thing, everybody likes him. The Congress' S. Jaipal Reddy, who is emerging as one of Sonia's trusted advisors, swears by him and with Mulayam and Surjeet no longer close like before, the former is more receptive to Somnath-da. Besides, Sonia's comfort level with him is greater than with any other member of the Left, or indeed, the entire non-Congress opposition. The two hit it off, with the veteran parliamentarian reportedly favourably impressed with her efforts at self-improvement. "She may not have a good grasp of issues, but at least she knows broadly what they are," observed a senior CPI(M) MP.

But most of all, Somnath-da is a close confidant of Jyoti Basu and most MPs, even from the Left, see his mediatory moves as being dictated by Basu. One speculation doing the rounds is that Basu could well emerge as the Left's candidate for President. Whatever the reason, most members of the Opposition acknowledge that they need to unite to check the free run enjoyed by the ruling coalition. Forging an alliance was something the innately reserved Sonia could never do, so it fell to Somnath-da to play the role of mediator.

Despite being its most prominent parliamentarian, Somnath-da has never been a CPI(M)heavyweight.He's not a member of the politburo or the state secretariat. In 1998, he made it to the central committee for the first time only because of Basu's intervention. The former chief minister would have liked to name him his successor, but it didn't quite work out. He continues as chairman of the West Bengal Industrial Development Corporation, a powerful position he enjoyed under Basu and still does under Buddhadeva Bhattacharyya.

As a highly successful lawyer who has represented several corporate houses, Somnath-da is also more corporate-friendly than most of his communist colleagues, fuelling speculation that the SP-Congress entente enjoys the blessings of certain business interests. He differs from his colleagues in another way as well. Not a cadre man, his first exposure to politics was through the Hindu Mahasabha, of which his father was a member. Somnath-da campaigned for him and when his father gravitated towards the communists, so did he. In 1972, he stood as an independent candidate backed by his mentor, Jyoti Basu. Thereafter, he joined the CPI(M) and began a long stint in Parliament broken only by his defeat at the hands of Mamata Bannerjee in 1984.

Somnath-da is the first to say that one should not read too much into the Opposition unity moves. The cautious approach is necessitated by the fact that suspicion of the SP's motives is rife in the Congress. At a meeting of senior party leaders with Sonia last week, it was pointed out that Mulayam stood to gain a lot from a Congress-SP entente, but he would certainly give the Congress the short shrift if he did well in UP. As for the rest of the Opposition, the party leaders felt that it should be ready in a post-UP scenario to acknowledge that any non-bjp coalition should be led by the Congress, which would reserve the right to elect its own leader. The absence of Manmohan singh and Pranab Mukherjee from the breakfast meeting is seen as part of the cautious approach of the Congress to unity moves.

On his part, the CPI(M) leader maintains that his mediatory efforts were aimed at ensuring floor coordination in Parliament and nothing more. A joint plan of action on Ayodhya, POTO, food management and economic issues was the urgent need of the hour, otherwise the government would be let off the hook yet again. "The kind of attention given by the media is a clear indication that a strong Opposition is what the people want," he says. The sharp differences of opinion within the Congress vis-a-vis not just Mulayam but the Left as well makes unity moves outside of Parliament a much tougher proposition.

Putting out signals of a united Opposition is enough for the present. Every player in the Somnath-scripted drama appears to derive some benefit from the entente. For Mulayam Singh Yadav, a visible thaw with the Congress can only help cement the Muslim vote in UP while giving bjp the heebie-jeebies. "Naturally, the priorities of different parties in UP are reflected here," says Somnath-da. What helps Mulayam helps the People's Front and therefore the Left.

For Sonia, it means enhanced acceptability, with the vexed question of her foreign origin being, if not put to rest, then at least pushed to the background. As for the Left, a mediatory role between the Congress and People's Front strengthens its relevance and gives it political leverage. Enough perhaps, to put forward its own candidate for President of India in case the current incumbent decides not to seek a second term.And of course, a united Opposition would keep the government shaky.

While Somnath-da took care to include the Sharad Pawar-led NCP in the unity moves, the bad vibes between Pawar and Sonia on the one hand and Pawar and Mulayam's chief lieutenant Amar Singh on the other have not abated. Which leaves plenty of scope for Somnath-da to exercise his newly acquired mediatory skills.