The BSP supremo is in a corner, but for the Bahujan Samaj she can do no wrong Updates 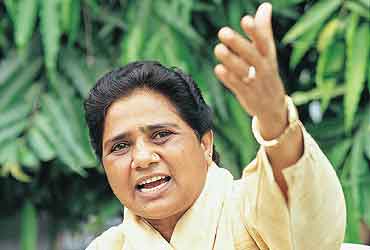 outlookindia.com
-0001-11-30T00:00:00+0553
Within days of Mayawati quitting as chief minister of Uttar Pradesh, the 24-hour power supply to her ancestral village of Badalpur, a BSP stronghold 60-odd km from Delhi, was cut off. There couldn't have been a more telling way of letting the Dalits feel the impact of the power shift in distant Lucknow. The chain of events since then has left nobody in doubt that the deposed queen bee has been stung. But even in this time of crisis, her ardent supporters are ready to stake anything to help her tide over.

The bad press from her spectacularly opulent birthday celebrations, the Taj corridor controversy or even her unaccounted assets cannot still shatter Behenji's support base. And it's not because the faithful don't believe the allegations, but due to a prevailing cynicism: isn't this what everyone else does? People from her loyal constituency say she's being singled out because she is a Dalit. "Who doesn't make money?" asks Surender Singh, a taxi driver from Badalpur and a BSP sympathiser. "Why should Behenji alone suffer? What has she done that other politicians don't do? To us, it makes no difference. She is our leader and we will vote for her regardless of what the CBI or the government say."

Political experts explain this unflinching support as an expression of the Dalits' struggle to carve out a political identity for themselves. The logic of such steadfastness is that they have very few options outside the BSP. "It's true that a vast majority of Dalits support the BSP for want of options. But there is no denying the fact that the party was able to generate a new political consciousness. In that sense, the BSP's achievement is more psychological than physical. Mayawati has made Dalits confident that they now own a political space even if her rule may not have meant concrete gains for them," says Dalit activist-intellectual Chandrabhan Prasad.

This can be clearly seen in the way members of her flock justify any alleged wrongdoing on Behenji's part. "What is the big deal? Forget their national-level leaders, I can name petty, local-level BJP politicians who are rolling in money. Why are they gunning for her? If you ask me whether I will even think about such allegations when I go to vote, I'll tell you that when it comes to the BSP we don't think. We just vote," says Mehraj Singh of Badalpur. The basis of valuation here, obviously, is identity-driven.

Similar voices can be heard from other Dalits in UP, who are not likely to hitch their wagon to any other political caravan all that easily. Says Kartar Singh Nagar, a BSP functionary in Khurja: "We are warning the government. If they touch Behenji, the whole nation will burn. Who doesn't know that the BJP helped Mulayam Singh to form a government in UP and split the BSP? Who doesn't know that she is being penalised for not staying with them till the parliamentary polls? This is political vendetta and everyone understands it as such. We only worry that they would somehow inflict irreparable damage on the functioning of our party."

Mayawati is not wrong when she says the Bahujan Samaj will give a befitting reply to what she describes as a "persecution drive". The almost unequivocal support that emanates from her village on the Ghaziabad-Bulandshahr border echoes across the hinterland, all the way to Lucknow. Her challenge to the BJP— "Agli baar gaddi par baith nahin payenge (They won't be able to capture power at the Centre next time)"—may be based on sound political logic. The Dalits in UP assert themselves in electoral politics exclusively through her party. The last few years have seen a remarkable growth in the BSP's electoral graph. In the short period between the general elections in 1996 and '98, the BSP's all-India vote percentage grew from 3.8 to 4.7 per cent. It is this 'transferable vote' that the BJP had hitherto relied on. Now, its withdrawal could spell serious trouble. Mayawati definitely is not the one to refrain from rubbing this fact in.

"They are nowhere in the coming elections. They depend on crutches—before they ditched us and now it is the SP. They are depending on Mulayam to repeat Godhra in UP, douse the whole country in communal tension and win elections. They are revoking Ayodhya for this precise reason. They have no issues left, they have failed on all counts," she says, accusing both the BJP and the SP of using the communal card.

Her last statement is true even in some constituencies held presently by the BJP. Her village, for instance, comes in western UP's Khurja parliamentary constituency which the BJP won in 1998. But of the five assembly seats in Khurja, three were wrested by the BSP subsequently.

According to Prakash Louise of the Indian Social Institute, Mayawati inspires such loyalty among Dalits because no other leader from their lot has emerged on the national scene. "There aren't too many options as far as the Dalits are concerned. They do sense political vendetta in the way cases are being filed against her. And, the BSP has grown from strength to strength in the past few years. It is perceived as the only platform where they have an exclusive right to participate in power politics," he says.

The current phase, according to Louise, is a formidable crisis for the BSP. "Kanshi Ram is too ill to cement the cracks inflicted on the cadres after the party split in UP. Mayawati is facing a spate of charges. I don't doubt that if the BSP pulls out of this crisis, it will emerge stronger. But this is definitely a critical period for the party."

Mayawati herself admits that she is facing a tough challenge. She says the violence in Agra last week which resulted in the death of two Dalits is a trend that will be repeated all over the country. This will be the Opposition's ploy to erode her support base. "The BJP and SP are in tandem. They are trying to divide the Bahujan Samaj by making Muslims and Dalits fight. The BSP will not let it happen. The BJP will realise its true worth in the next elections when it will lose all that it has," she warns.

The only fear her supporters now have is that she may be barred from contesting elections because of the cases against her. For them everything else is of no consequence, even reports of her unexplained wealth are dismissed as 'lies' concocted by the CBI, and played up by the "Manuvadi" media.

Minions Of The Metro Machine