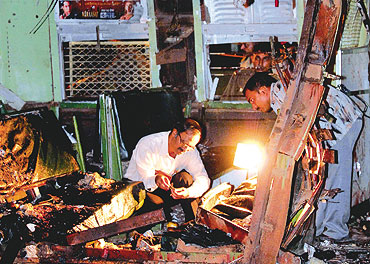 outlookindia.com
-0001-11-30T00:00:00+0553
Two days after the July 11 serial blasts on Mumbai's suburban railway, the line of investigation seems to have hit a dead end. It seems to go no further than a recitation of familiar names, the Lashkar-e-Toiba (LeT)—which the investigators believe to be the mastermind behind the attack—and the banned Students Islamic Movement of India (SIMI), which is supposed to have provided the logistical and resource support for the diabolical plan.

Pursuing the LeT-SIMI trail, investigators are exploring a possible link between the massive arms and ammunition haul from second-tier cities across Maharashtra in early May and Mumbai's rail blasts on Tuesday. But since there are several missing pieces in the jigsaw, the police are refraining from confirming any direct link between the two episodes. The police are also examining the sleeper cells and terror modules in and around Mumbai that slipped out of their dragnet earlier this year. While the Mumbai police successfully busted more than half-a-dozen such cells and modules—small, well-trained, two- or three-men units that work independent of one another so that none can reveal the spread or penetration of such units in the city—a few did elude the cops. "The LeT-SIMI hand working through sleeper cells that escaped the net might be behind the July 11 terror attack," a senior officer discloses.

The May haul, however, remains the definitive pointer to major underground activity, say sources. Acting on information gleaned from their operatives, the Anti-Terrorist Squad (ATS) of the Mumbai police had made arrests as early as January this year. It then began combing operations in April-May. The recovery made from Aurangabad, Manmad, Malegaon and other second-rung towns stunned even the cops: between 30 and 45 kilos of RDX, 16 AK-56s, about 60 grenades and other ammunition. The ATS efforts resulted in 20 arrests then. When an early morning attack on June 1 on the Nagpur headquarters of the RSS was foiled and 3.5 kg of RDX along with three AK-56s were recovered, the Mumbai police believed they were on the right track in suspecting "something major in Mumbai".

This has led to the valid conjecture that there must have been more caches of RDX and arms that had not been recovered either in the Aurangabad-Malegaon raids or in Nagpur. Sources say that the blast investigation is now trying to see if, and how, some of the non-recovered RDX might have somehow found its way into Mumbai.

A day after the blasts, the ATS constituted 18 special teams comprising 50 men. These teams fanned out to different areas of the state with intensive efforts in Aurangabad, Manmad-Nashik and Malegaon to follow leads from May. Combing operations in these places and in Mumbai resulted in some 200 people being picked up in two days for interrogation and background checks. They zeroed in on one Zahibuddin Ansari aka Zaby who was believed to be the chief coordinator behind the arms import into Maharashtra. Ansari is now among the prime suspects in the July 11 blasts as well. Sources disclose that Ansari and his two accomplices had been to Nepal and Bangladesh earlier this year where they met "isi handlers" to work out the route and resource logistics of smuggling such a large quantity of RDX, arms and ammunition into the country, and specifically into Maharashtra. Mumbai cops are also looking at the involvement of a certain Rahil who runs a travel agency in south Mumbai and is believed to have been a LeT operative. The ATS has also come across a roster of calls made from the blast sites to Karachi and Dubai soon after the blasts.

The IB too have been following their own leads. They have been tracking LeT operative Mohammed Fayaz, who managed to slip out of the country in June last year. According to sources, Fayaz and his associate Zahibuddin Sheikh—the same Zahibuddin?—had been part of a LeT cell operating out of Aurangabad. They used fake passports and went to Bangladesh before travelling to Pakistan for training. Fayaz also travelled to Iran via Bangladesh and Pakistan before slipping into India. He, say officials, could have been part of the team that planned Terror Tuesday, along with local youth drawn from the SIMI.

Evidence from the blast sites has been sent to forensic labs for analysis by the ATS but immediate clues suggest that the RDX-laden bombs were detonated by timers, and the entire gadgetry was placed in regular-looking briefcases that commuters usually keep on the overhead luggage racks, not under seats as some witnesses suggested. In almost every case, the roof of the compartment has been blown apart and the damage is not uniform from top to bottom. Pieces of burned wire and other material recovered from the site have also led the ATS to believe that the bombs were not triggered by remote control but by an in-built timer.

The ATS has also completed some sketches of suspects but was unwilling to release them immediately, going by past experience. Early release of suspects' sketches in the Varanasi Sankat Mochan Mandir attack case had hampered investigation. The Mumbai sketches have been prepared largely on the basis of statements and information given by eyewitnesses and bystanders. One set of witnesses recalled two big-built, bearded men in Pathan suits speaking at the Churchgate station and boarding two different trains, and most probably getting off at Mumbai Central station, barely 10 minutes away. The blasts happened roughly 15 minutes after they had alighted.

In another lead, a bystander at a bus-stop outside Churchgate station recounted that two large-built men in Pathan suits were waiting there with briefcases in their hands, talking furiously in Pashto. They were later joined by a third man and one of them broke into Hindi saying that "the parcels should be left in trains...you get off at Mahim...take a car back" or words to that effect. Vague leads perhaps, but invaluable for cops.

To an extent, the investigation has been hampered by the confusion between the investigating agencies themselves. In the initial hours, the Mumbai police insisted that the Railway Police Force conduct the investigation since the blasts had taken place under their jurisdiction. Within a day, however, with a change of mind at the topmost levels, the blasts probe was back with the ATS. But even as the ATS settled down to conduct the investigation and packed off special teams to sensitive towns across Maharashtra, it was announced that a Special Task Force (STF) would be constituted under top cop Rakesh Maria and that it would handle investigation. Maria, along with A.S. Samra and M.N. Singh—who were then police commissioner and joint commissioner respectively—had cracked the March 1993 blasts case.

Similar differences have prevailed over intelligence inputs. While Maharashtra DGP P.S. Pasricha emphatically said there was prior intelligence about terror strikes and the state home minister stood by that assertion, chief minister Vilasrao Deshmukh, Mumbai police commissioner A.N. Roy and ATS chief K.P. Raghuvanshi denied this outright. They said they were not privy to any such intelligence reports, and that intelligence did not go beyond a general regular alert that Mumbai could be the target of terrorists. Roy told the media that the blasts caught him and his force "off-guard", that the terrorists had "taken them by surprise" and that they would have taken steps to prevent it had there been specific intelligence reports.

Former top cops in Mumbai would say that local intelligence is not as strong and definitive as it used to be in the '90s. But then the team investigating the March 1993 blasts did not have any clue about the involvement of the underworld, specifically of the D-Company, in the episode for a good 48 hours after. The initial probe trailed Khalistani militants and then Kashmiri terrorists until a chance clue led them on the Dawood trail. One can only hope the probe into the July 11 blasts is on the right track.

By Smruti Koppikar with Saikat Datta in Delhi