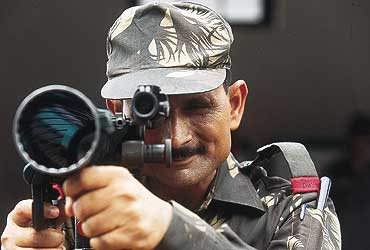 outlookindia.com
-0001-11-30T00:00:00+0553
Close on the heels of Central Vigilance Commissioner (cvc) N. Vittal's report confirming the presence of middlemen and agents in defence deals comes another special audit by the Comptroller and Auditor General's (cag) office. And it's as scathing as Vittal's report, slamming the ministry of defence (MoD) on its emergency procurements during Operation Vijay in Kargil. Worse, this skewed policy of emergency purchases bypassing all norms of procurement was pursued much after the war.

The cag report details at length the procurements made during and after Operation Vijay. A copy of the report obtained by Outlook shows how material deviations were made from procurement procedure in a large number of arms purchases. These revelations, along with the yet-to-be-made public Vittal report (submitted on March 31), will definitely put the Vajpayee government in a tight corner on the issue of defence deals. "We hope to place it in Parliament during the winter session," says an official in the cag office.

The audit's objective was to assess the efficiency and economy of the procurement system and identify the major cases of irregularities. On both counts, cag has come up with serious objections, stating that the bulk of procurements for Operation Vijay were "guised routine procurement with relaxed norms of scrutiny and no budget constraint". The MoD pushed through over 135 contracts totalling Rs 2,180.61 crore.

The cag report assumes added significance in the light of defence and external affairs minister Jaswant Singh's assertion on August 27 that greater transparency in arms procurement would be ushered in. He told the Rajya Sabha that the structure and details of all defence procurement will be posted on the MoD's website in a few weeks' time. The defence minister hopes to streamline the procurement system, currently hostage to inordinate delays. "Maybe he was aware of the faulty procurement system being followed and was trying to distance himself from deals entered into by his predecessor," says a senior army official.

Among the key deals the cag report has questioned are: