Indian hockey is now past it. The state must act, Gill must go. 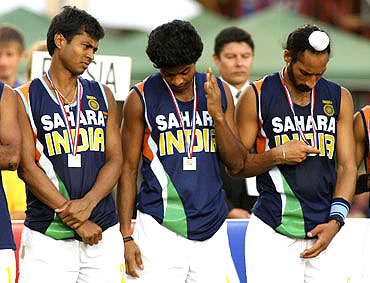 outlookindia.com
-0001-11-30T00:00:00+0553
Indian hockey didn't die in Santiago, where India lost to Great Britain. It died in India, in small pockets spread over the country, which used to be the breeding grounds of great players.

K.P.S. Gill, the Indian Hockey Federation president, must go, and immediately. We can't expect him to step down on moral grounds. He says he doesn't have an instant machine to produce instant results. But he's been around for 14 years. In the three Olympic Games after he took over the IHF reins, India didn't qualify for the semi-finals even once. And now we're out of the Olympic Games for the first time in 80 years. Gill has had enough opportunity to display signs of morality in those 14 years, but he didn't do that. Now he should not be allowed to stay on.

Fourteen years is time enough to create good teams; indeed, some good teams did come into existence in this period, but they were simply 'murdered'. In '98, when we won the Asian Games gold medal, we had a pretty decent bunch. Then India narrowly missed qualifying for the semi-finals of the 2000 Olympic Games at Sydney.

But after 1998, there's been a cat-and-mouse game on between the IHF and players. Just as a cat plays with the mice before killing them, Gill played with the players and the game in the country. Finally, in the game against Great Britain in Santiago, the team played as if it had lost life.

The government too cannot shake its responsibility off the affair. Sports minister Mani Shankar Aiyar has said in the past that he's not keen about the job. Such a man will simply let sports die. What sort of joke is this on the country? It's unacceptable that the government is not in a position to do anything. How can it say that it can't interfere in the IHF's affairs as it's an autonomous body? If that's so, why does the government have a nominee in the selection committee? Why does it hold camps for the team, send observers to tournaments abroad? The government spends money on the Olympic movement, and it has to—not the ioa or IHF—answer to Parliament. If the sports ministry doesn't act, the prime minister's office must. Gill will have to go.

The government, actually, should have acted 32 years ago, after the Montreal Olympics, where we failed to win a medal for the first time. That was the first stroke suffered by Indian hockey. But the IHF said it wasn't a cause for worry; it did not tell the country that the situation had got out of hand. It could only talk of improvement, it could only make false promises and keep hope alive with talk of a resurgence.

We must not err in believing that Indian hockey died with just one match in Santiago. We haven't qualified for an Olympics semi-finals since Moscow 1980, where we won a devalued gold in a Games affected by the US-led boycott.

But now hope is over, hockey has died, and a continuity with the golden past is also over. We must start anew. Just as cricket has emerged in a new garb, in a new form and with much more money, hockey must change.

Hockey was a source of pride for the country, and the government must act. Instead of washing its hands of the whole affair, as Aiyar has done, the government must accept that it's a major setback for the sport. It must immediately sanction a sum of Rs 500 crore to revive the game. Hockey is disappearing from places that were traditionally source pools for the best players. The government must get at least 100 astroturf surfaces laid countrywide.

The new emperors of the country, men who make the Forbes list of richest people, must be roped in. They must be given the responsibility of running hockey too. They're throwing so much money into cricket, the money required to help hockey would be peanuts in comparison. Businessmen should not make profit their only motive when investing in sport. If you do that, where's your responsibility towards the country's national sport? And it won't be a bad investment—the day India wins a medal again at the Olympics, every Indian will support hockey.

It's a fact that every Indian is pained that our team is not doing well, which was reflected in the success of the movie, Chak De. People thronged the theatres to see our girls fight and win, even if it were in a movie. There's nothing to be gained by hand-wringing. A chapter is over, and to start a new, hopefully better chapter, the government must act. Now.

(The writer is a former hockey player and member of Parliament)