The ‘Metro Man’ on the need for reforms in governmental attitude and the ‘control Raj’ that still exists despite two decades of liberalisation. 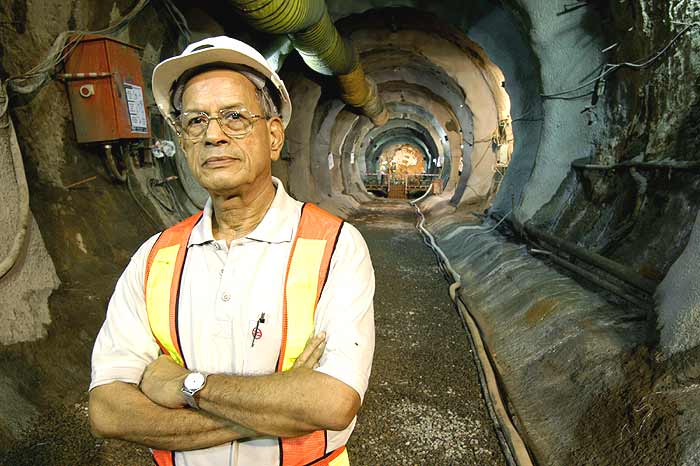 ‘Metro Man’ E. Sreedharan has been revered as the professional who has kickstarted a whole new work culture in India. But he finds the quality of a majority of engineers in the country below acceptable standards. He blames this on the unbridled growth of private engineering colleges, with no regulatory body in sight. A few days before announcing his succession plan at the Delhi Metro Rail Corporation (DMRC), he met Arindam Mukherjee for an hour-long freewheeling interview. He stressed the need for reforms in governmental attitude and the ‘control Raj’ that still exists despite two decades of liberalisation. Excerpts:

Do we need to take a fresh look at how engineering education is being run in India, with so many private colleges coming up?

We have enough engineering colleges, producing about two million engineers per annum. But the best out of the IITs and RECs make a beeline for universities abroad. The next best go for management and prefer to sell soaps and oil rather than doing engineering. The next lot goes to the IT sector, which is very lucrative. There are still large numbers left who, unfortunately, are not of the required quality. That means the level of education, particularly in private colleges, is not up to the required standard. There are a few good private colleges. The remaining are all ‘business’ colleges, which take capitation money and high fees, take students through three to four years and give them a degree. Unfortunately, many of them are deemed universities. This is most unfortunate, and a shame to the nation. We have been so liberal in giving them university status without controlling quality.

How can we fix matters?

“A few private colleges are good. The rest are all ‘business’ colleges which take capitation money and high fees.”

When I started as an engineer, the standard was so high. At that time, the whole of Madras presidency had only four engineering colleges. Today, the same geographical area has 2,000 engineering colleges. But nobody is controlling quality—mass-producing engineers without any quality is of no use to us. There should be a body to regulate and fix the minimum standard required for engineering education and bring about uniformity in the whole country. You cannot have an IIT producing a top-class person and an unknown college in Tamil Nadu producing another person with absolutely no match in their quality. The body should also be responsible for the conduct of engineers later on. Today, if somebody makes a mistake, he can only be taken to court but cannot be banished from the profession. In our own experience at DMRC, we had a bad accident in Zamrudpur. The engineers involved, particularly in the design, cannot be expelled from the profession. Any other country would have seen to it that they did not continue as engineers.

You have suggested a metro technology course at the IITs.

That is because we are facing an immediate problem. Seven other cities have started metros, another seven are waiting to take off. When we started the metro in Delhi, because of my long association with the Indian Railways and Konkan Railways, I could bring out lot of railway engineers. But now, for meeting the technical manpower requirements of so many metros, there are not enough professionals available in the country. So poaching is going on today. I recruit a man, train him, he is poached by a consultant offering three times the salary. Then, another consultant, who is prepared to pay five times the salary, poaches him yet again. Despite that, none of the metros have even one-fifth of their manpower requirement.

We requested IIT-Delhi to start an MTech course in metro technology with streams from civil and electrical engineering. They agreed, provided DMRC met the entire cost. We agreed and have trained 60 people in three batches. So I approached the HRD ministry, requesting them to start MTech courses in at least two IITs, one in the north (IIT-Delhi) and one in the south (IIT-Madras). It (the proposal) is still not accepted by them. The main difficulty is the absence of faculty which has knowledge of a metro. 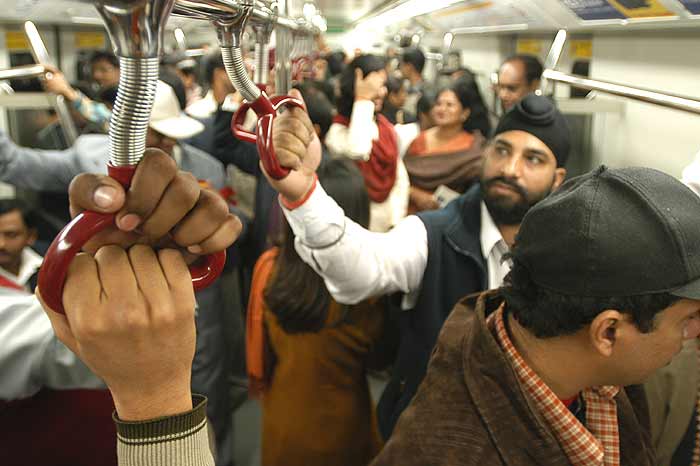 The Exemplar The Delhi Metro has been largely the achievement of Sreedharan. (Photograph by Narendra Bisht)

Are you averse to having this course in select private sector colleges?

I am not very enthusiastic. In fact, some private colleges have already approached us. Private college means it becomes a business. Education cannot be taken as a business. They want to start the course not to help the metros or the nation, but find a business opportunity and charge high fees. The kind of fees charged for engineering education is very high today. When I joined a government engineering college in 1949-50, my monthly expenditure, including fee, hostel and food, was between Rs 45 and 50. Today, for a normal engineering college, the yearly fee is about Rs 2.5 lakh, plus Rs 1,500 monthly for hostel and food. The government should make engineering education easily accessible to poor people.

“I’m not against PPP per se. But it works only in financially viable projects, which metro projects are not.”

How would you motivate engineers to come and join government services?

The first factor in motivation is pride in their profession. Today, in India, engineers do not have any pride because they are under bureaucrats. Engineers with 30 years of experience are working under bureaucrats with 12-15 years of service. What pride or satisfaction will they have? Give them a place of honour. I see no reason why an electricity board, which is purely a technical matter, should have an IAS as chairman. Why not an outstanding electrical engineer? Why should only IAS officers head the highway authority? Why not a distinguished highway engineer? In Germany and Japan, it is not bureaucrats, but engineers who control things. I have seen government engineers, particularly in Kerala and Tamil Nadu, with 30-35 years of experience, but there is no motivation because, for everything, he has to take orders from a bureaucrat. This has to change.

You are not particularly in favour of the PPP (public-private-partnership) model.

I am not against PPP per se. I only say that it will work only in financially viable projects. Any investor would want 15-18 per cent return on investment. Metro projects are generally not financially viable, so why would anyone invest here? Airport, port or highway projects can be on a PPP model but social projects where you have to keep cost of service down because poor people use it, cannot be on PPP. We did the airport project on PPP because air travellers can pay heavy fares. While Delhi Metro’s average fare is about Rs 14, air travellers can easily pay Rs 150-200 and still save money, as a taxi costs much more. But what is our experience? The government incurred nearly 55 per cent of the cost, but the project was not completed on time for the Commonwealth Games. Even today, the services are not as we envisaged. If I did the whole job, it would have been completed and been fully in place on time. So even in a viable, financially attractive project, the PPP model has failed.

You have always spoken of different work ethics...

The problem is with our government environment, where there is wastage, inefficiency and indecision. But in the private sector, ethics, efficiency and delivery are very good despite so many regulatory obstacles. The Krishna Godavari (K-G) Gas Basin of Mukesh Ambani’s Reliance is a fantastic showpiece. If you see the time taken, the way it has been done, the high technical standard, anybody can be very proud of it. It is perhaps better than in a country like America.

How is corruption impacting the industry and investors?

All along, even before these cases came, we had a bad name. We were 74th in the corruption index even before Satyam. We have been accumulating this notorious bad name for the last several years, starting with, perhaps, the Bofors scandal. Now, some of the foreign investors find corruption a convenient thing to get business in India. So they were looking at it very nicely. Nobody raised a finger against it. I don’t think any foreign investor suffered. The sufferer was only the country. And the industry’s image has been seriously tarnished in the eyes of the average Indian.

How do you see the growth of the Indian economy with the current levels of inflation and its associated problems?

“The K-G basin of Mukesh Ambani’s Reliance is a fantastic showpiece, the time taken, the way it’s been done...”

The economy can grow faster. But we need a complete change in government attitude and controls. At every level, there are so many controls and regulatory bodies. We are not learning lessons from China and how it came up so fast in the last 20 years. Controls at every stage are actually slowing down our progress. Government’s inactivity and lack of decision is also affecting us. Take the example of metros. China is building metros at about 150 km a year. We are able to produce hardly 25 km a year, that too thanks to Delhi Metro.

But see how much time it takes for clearances. Bangalore Metro took three-and-a-half years to get sanctioned. In China, it would have taken three months. Even today, they are not able to progress fast because they are not being empowered. This atmosphere has to change. For a simple metro like Kochi, there was a lot of debate over whether it was needed or not. And finally it was cleared, but on a PPP model. And for this, it has been delayed by 4-5 years and the cost has doubled.

How should we tackle corruption in the system?

We should look inwards and cleanse the system. Empower people and trust them. Because of a few cases of corruption, you should not distrust people. People in charge of projects have to be given full authority.

A large part of India’s leadership is ageing. Does the next generation have similar values?

I feel the next generation is better equipped. I didn’t have the exposure and training they have. The only thing missing is the confidence and trust that people have because of the lack of integrity. If that is there, people have a better opportunity and chance to lead the country.

Can the E. Sreedharan model be replicated?

Why not? Only you have to give the new leaders the same kind of confidence and support.

What would you do after the metro?

I want to completely retire from professional life. This time I have requested the government to allow me to go and pursue things I haven’t been able to all these years.

What would you tell new engineers entering the industry?

They should take pride in their profession. A passion for the profession is required. They should not look only at remunerations, positions and postings. Remuneration is not the reward for an engineer. The reward is the satisfaction of doing a job well.

The Nizam’s Stagecoach To The IIT